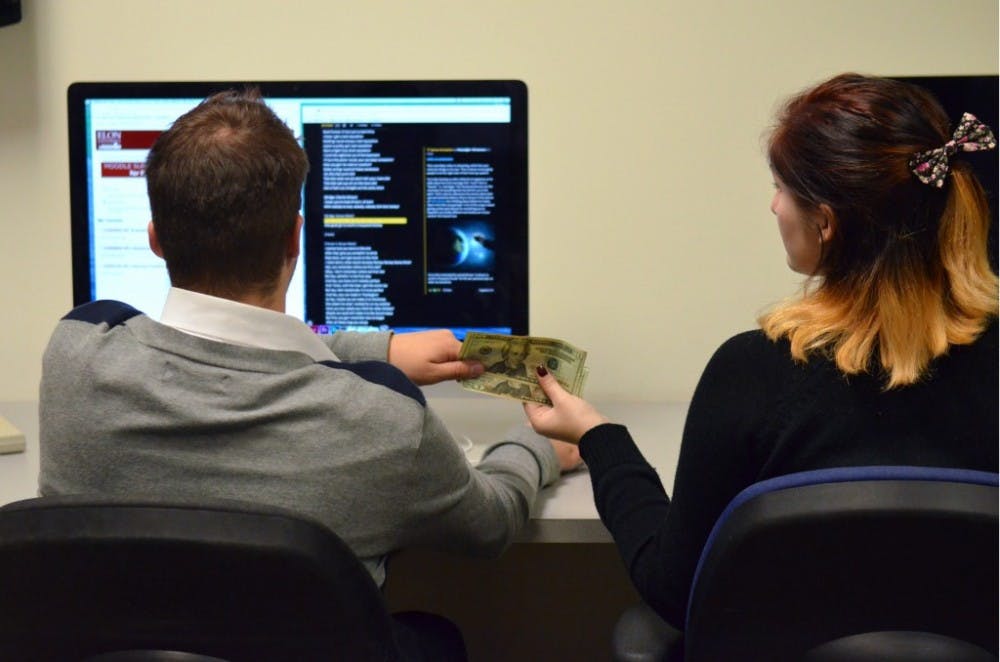 Cheating and plagiarism sit at the top of honor code concerns at Elon University and at most schools. But as the technology around teaching and the professional world change, the need to reassess the climate of unethical behavior arises.

“It’s one of the things that’s so basic, we forget to talk about it,” said George Padgett, associate professor of communications.

One of the main changes to classrooms in the past few years has been the popularization of online courses. In an environment where a professor and a student cannot see one another, professors have different takes on whether this makes cheating more or less likely.

“I’m not concerned that they’re looking things up,” said Megan Isaac, associate professor of English and chair of the department. “The assignments are open-book already.”

Isaac said in the online courses she’s taught, the assignments are mainly essays or other written compositions. When it comes to students buying essays or having someone else write those works, Isaac said an online course “very marginally magnifies” concerns.

“The same red flags I look for in a face-to-face classroom carry over to papers in an online class,” she said.

Other professors are more concerned.

Art Cassill, professor of accounting and Wesley R. Elingburg Professor in the Spencer and Martha Love School of Business, said an online class “absolutely” increases his concerns when it comes to cheating.

“You’re more sensitive to it. You don’t have that control that you’d have in a live classroom,” Cassill said. “You’d be naive to think it’s not a possibility.”

Cassill said a student cheating in a classroom can be observed and confronted more directly than in an online environment where students are in different time zones.

“My perception of cheating online is less than when I started, but I try to think the best of our students,” he said. “But the reality is, if I give an exam, I don’t know if that student is the one actually taking it or if that student has his or her book open at the computer. You do what you can do.”

Isaac said the idea of someone else taking a class for a student is one thing she is cautious about because she cannot tell who the person on the other end of the computer is, but added this still wasn’t an especially large concern for her.

“When it comes to idea that someone’s girlfriend or boyfriend will take an online course for a student, I don’t think that’s how our population acts,” Isaac said.

Whether in a face-to-face classroom or in an online class, students have varying feelings. Sophomore Alec Horter said most of the actions violating Elon’s Honor Code that he’s seen are students working on homework together, but said the idea of classmates cheating on tests bothers him.

“If I studied for three hours for a test and I saw [cheating], I’d be mad,” Horter said.

Other students, like first-year Nicole Connor, have a different take.

“I wouldn’t care and I wouldn’t say anything,” Connor said. “It’s not affecting me.”

Another area where cheating, and plagiarism specifically, is a concern is in communications. Recently, CNN host Fareed Zakaria was spotlighted after two anonymous journalists operating a media criticism blog called “Our Bad Media” brought charges of plagiarism against him, which were later picked up by outlets like Politico and Esquire.

Zakaria is still with CNN and Network President Jeff Zucker said to Politico reporters that he “continues to have complete confidence” in Zakaria.

Padgett, who teaches Media Law and Ethics, said the accusations by anonymous journalists   @crushingbort and @blippoblappo show clear evidence of plagiarism and CNN is “doing everyone a disservice” by not addressing it. He hopes communications classes at Elon bring it up.

“It’s a teaching point,” he said. “In this digital age, it’s so easy to copy and paste. It’s easy to plagiarize.”

The public accusation of a prominent journalist of unethical behavior who was allowed to keep his job can send a bad message to aspiring reporters and writers. Padgett said it’s important for teachers to bring up Zakaria as an example of what not to do.

While adding that Zakaria should have known better, Padgett said plagiarism, especially in the digital age, can be a gray area. Students and journalists need to follow an absolute rule of attributing quotes or sources, even in a tweet.

Cassill’s techniques to limit the ability of online students to cheat involves crafting assignments to make unethical action more difficult and repeatedly reminding students about Elon’s honor code. He tells students in person before the class starts, in various follow-ups, in the syllabus and before tests that they are still Elon students even if they’re not in a physical classroom.

“It sounds simple, but I think it’s important to remind people of their integrity and their obligations,” he said.

Cassill said he designs his tests to have time limits and tries to design questions that require more writing and may mix up the types of questions asked.

“It’s a lot more work for the faculty, but you’re getting the design that you want,” he said. “All the things that are advantages of online for students present challenges for faculty. If you’re doing this the right way, it’s hard.”

Isaac takes a similar approach in her writing assignments as she would in a traditional classroom, putting “scaffolding” in place to ensure that students are doing the work themselves.

“I can require an outline initially one week, then a first paragraph, and so on,” she said. “If you’re buying a paper, that’s more work than someone on the other end is typically willing to put in.”

Now that he’s been teaching online courses, Cassill said he is a supporter of them and thinks they’re here to stay.

“We have a population of students here who do really well and excel online and have good self-discipline,” he said. “I wasn’t sure that would be the case.”