Is this your card? New student introduces magic to Elon 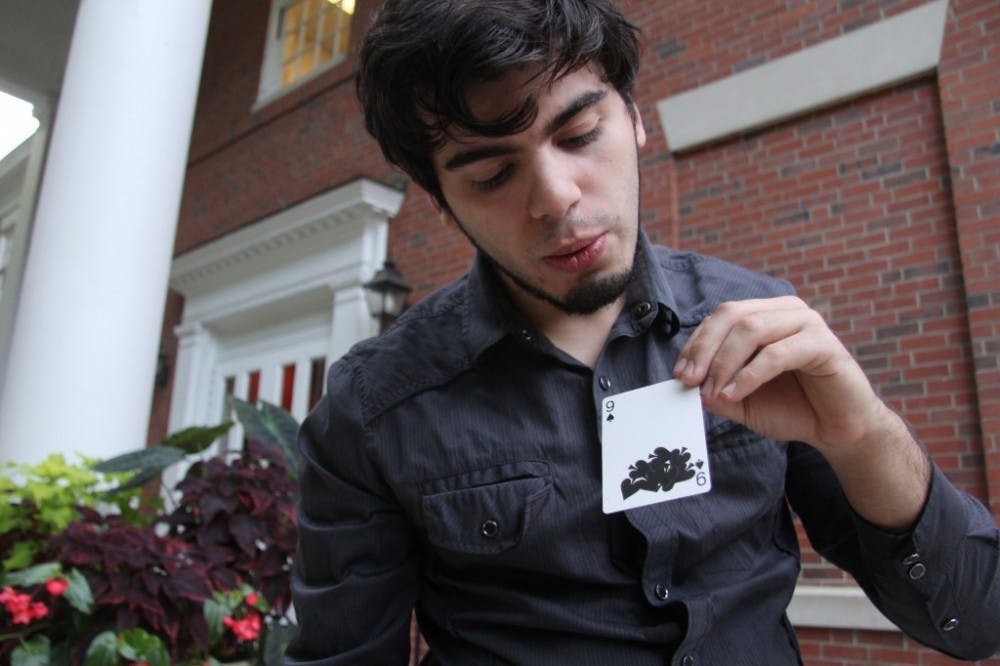 Alexander Bergelson can be seen around the Elon University campus with cards in his pocket and tricks up his sleeve. After 11 years of perfecting his magical abilities and learning a new language, Bergelson looks forward to sharing his talent with Elon students and faculty by creating an original show on Elon Student Television (ESTV) and by giving live performances.

Bergelson first developed a passion for magic growing up in Moscow. When he was seven, he watched a magician perform and was more impressed by how the tricks were executed than the outcome.

“I wanted to learn the secret,” Bergelson said. “Upon learning the secret, I realized that magic is more than trick cards or sleeves or gimmicks or props. It’s about psychology.”

When Bergelson began performing in Russia, he had to quickly adapt to a new life. At 14, when his stepfather received a job transfer, he moved to Chapel Hill. One of the first problems he experienced was learning a new language.

“I went to middle school a week after I came to the United States, so I had no idea what people were saying,” Bergelson said. “I really had to adjust by learning from people around me and learn by being in that culture.”

Despite this obstacle, Bergelson learned how to speak English and to appeal to American audiences.

Instead of presenting elaborate stunts, Bergelson’s area of expertise is in close-up magic. Many of his tricks involve sleight of hand, a technique that secretly manipulates ordinary props, such as coins and cards.

For one of his most impressive acts, he borrows a dollar bill from a spectator’s wallet. Once he gets the bill, he slides his fingers across it and removes some of its printing. Within a few seconds, one of the stamps on the bill goes missing. Because the dollar bill can no longer be used, he magically transforms it back into its original form.

Bergelson’s RA Ryan Harrington has had the opportunity to see him perform lots of tricks.

“He’s pretty incredible as far as the close-up magic that he does,” Harrington said. “Every time I see him, he’s got some kind of new trick that he’s pulling out.”

Although Bergeslon refused to reveal the secrets behind his tricks to non-magicians, he admitted the psychology has a significant impact on execution.

In addition to watching magicians perform, he also studies magic by networking with other professionals in his industry. When visiting Magic Castle, a Hollywood nightclub for magicians and magic enthusiasts, Bergelson met with people who shared his passion and motivated him to be a professional.

“A great man who I think influenced me to become a professional is Mark Alexander Gibson,” Bergelson said. “He is the youngest magician to have been accepted to Magic Castle, and we went to the same high school. I think he is the one who really influenced me and pushed me into becoming a professional.”

Another source of inspiration is Tomas de la Cruz, also known as Smoothini.

Smoothini competed on the most recent season of the NBC hit show “America’s Got Talent” and advanced to the semifinals. Today, Bergelson and Smoothini communicate with each other via Skype to exchange their ideas.

Because Bergelson is a full-time student at Elon, he hasn’t been able to return to Magic Castle for a few months. Nevertheless, he plans on returning in the near future. Meanwhile, he is focused on sharing his talent locally.

In order to spread the joy of magic to others, Bergelson regularly performs in the local community. In addition to performing in Chapel Hill, Durham and Burlington, he will be showcasing his talents to Elon students.

He is currently working on developing a new ESTV magic show that has yet to be named or piloted.

“It’ll be a show about the history of magic, psychology of magic, and there will be a lot of magic on the show itself,” Bergelson said. “I’ll be doing magic for people around the campus.”

Bergelson first came up with the idea to create a show when thinking of ways to take his magic to new levels to different audiences. Although he has experience with stage and street magic, he has never done television magic. After finding out about the pitch process and sharing his idea, he got approval for creating a pilot.

“I have a team [that includes] a producer, post-production designer, two cameramen and a sound designer,” Bergelson said.

While Bergelson prepares to launch his new television program, he continues to look for new opportunities to showcase his talents.

This Halloween at 8:30 p.m., Bergelson is scheduled for an on-campus mentalism show, which features psychokinesis, telekinesis and telepathy, at the Irazu Coffee Shop inside of Moseley Center.