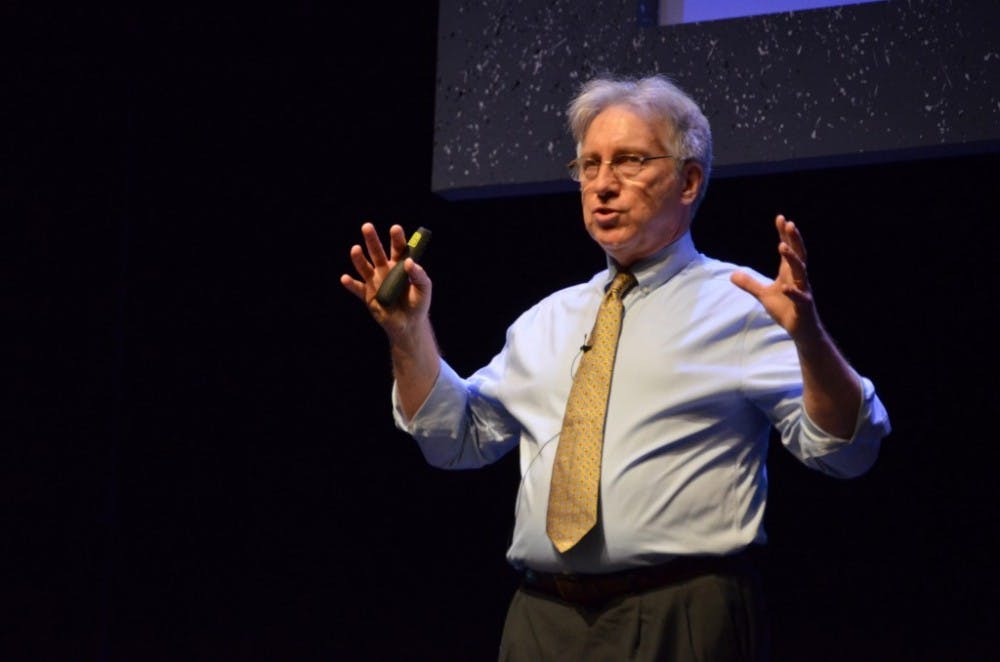 Daniel Herr, nanoscience department chair at the University of North Carolina at Greensboro, sees potential for better technology all around him, from the feet of a fruit fly to the DNA replication of his granddaughter.

“A baby is assembling bio-bits a million times faster than a factory can put the same amount into a transistor,” Herr said, referring to blocks of biological information. “If you compare the joules in that factory to the calories that baby intakes, it’s just as efficient. It’s amazing functionality. We’re not there yet.”

Herr spoke to a crowd of several hundred students gathered at Elon University’s first Voices of Discovery, a speaker series designed to bring scientific minds to campus, talk in McCrary Theatre Sept. 15 to talk about the work being done in nanotechnology, not just at UNC-G but around the world.

One of the clearest examples of processor power growing Herr gave was Moore’s Law. Every three years, the number of transistors in an integrated circuit doubles. Thus, the size of technology has gotten smaller and smaller to accommodate.

As the power of processors has grown with incredible speed, so has the cost increased to produce them. Herr referenced a recent factory built in South Korea for $11 billion.

“How many companies can afford that much for a factory, with the need to reinvest that every three years just to stay competitive?” he said.

Herr’s solution to the problem is finding new ways to develop and manufacture in nature, which he described as full of marvels of bioelectrical machinery. He attributed part of his interest to his unorthodox upbringing for an engineer. Herr’s father was born in an Amish community. After leaving, he worked on the first large-scale electronic computers.

“My dad’s paper was one of the first devices to do algebraic formulas,” Herr said.

Farm life remained close to Herr throughout his blossoming scientific career. He recounted a time when he had to develop a solution to a cow that was giving birth while its calf was in a breach position. Herr whipped together a pulley mechanism to pull the calf out and described it as a problem-solving test that “you can’t learn in a book.”

In looking for methods for more efficient production, Herr looked at a variety of natural phenomena. One area of particular research is the different quantum effect on metals when they reach a certain size.

“If you get around 3 to 5 nanometers, there’s the same number of atoms on the inside a piece of metal as there are on the outside, so the properties begin to change,” he said.

This is particularly being used in lead soldering to manipulate the melting point of the metal - while also controlling its toxicity - when it is put into various electronics.

Biological organisms, particularly cells, are more efficient compared to even modern nanotechnology. Herr pointed to the ability of a white blood cell to track a bacterium or DNA to self-replicate as a goal. The way transistors and circuits are largely built now, through “subtractive programming” is too wasteful, according to Herr.

“In February, IBM created a self-assembled complex circuit that was a few 1000’s of atoms across,” he said.

The small size of these pieces is necessary as technology becomes more advanced. Herr compared modern phones and tablets to multi-purpose devices like tricorders in Star Trek and said if everyone from doctors to engineers to the average user wants more applications loaded on, “if you don’t want to lug around a big box, we’ll need smaller processors.”

The obvious limit to manufacturing new and improved technologies with such abilities is price , Herr said way of building smarter devices will have to look to “adjacent states” beyond power, like sensitivity or communicative ability.

“Within 10 years, traditional manufacturing in transistors is going to end,” he said.

Herr spoke to a mostly full auditorium, attracting students who weren’t all focused on nano-engineering.

“It was really fascinating. It started off being over my head, but once he started getting into the applications, it became very clear,” said freshman Maddy Wetterhall.

Herr’s talk on the use of nanotechnology did not just focus on manufacturing and spanned all disciplines, from antibacterial surfaces to prosthetics for amputees.

“The talk made me think about all the ways nanotechnology can be applied, especially in medicine since that’s my focus,” freshman Kaylyn Brock said.

Herr’s research is located in Greensboro, the second-largest food desert in the country, according to the Food Research Action Center, and in addition to his research in manufacturing, he talked about using nanotechnology for hydroponic farming in abandoned buildings in the city to produce 30 times the yield of a normal farm the same size, while using a 10 percent of the water.

“I’m kind of returning to my Amish roots with agriculture,” he said.