Safety at Elon after dark 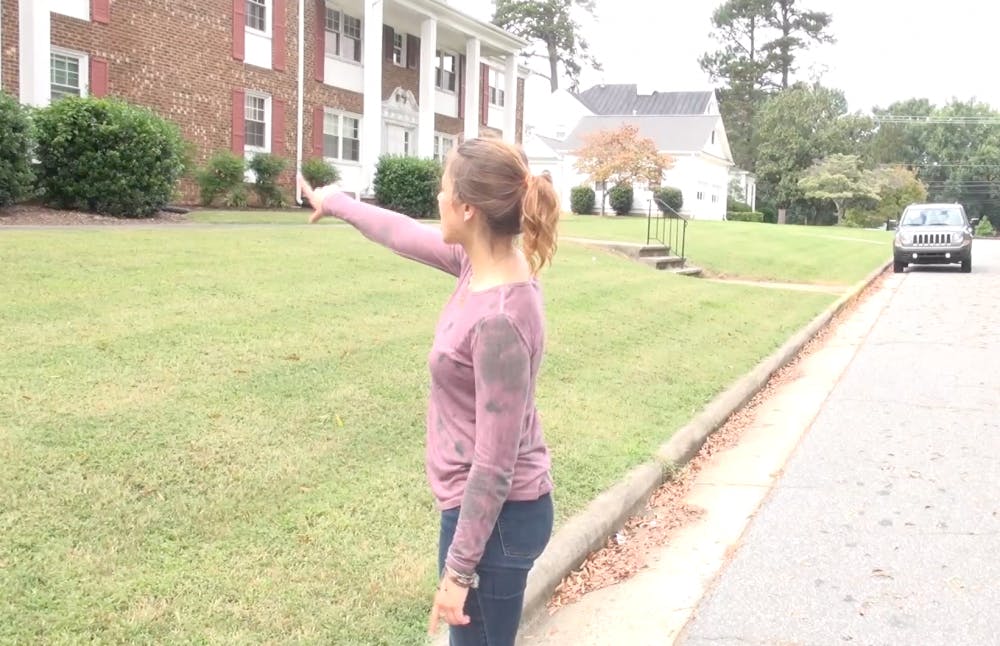 Nicole Molkentin shows where she was verbally harassed last weekend.

University of Virginia sophomore Hannah Graham is still missing after leaving a party by herself on Sept. 13. She was last seen around 1 a.m. For many college students, walking home alone doesn't seem like a big deal. People do it all the time here at Elon. But even students that walk home in groups may find themselves in harm's way.

Molkentin said she was walking down Atkinson Avenue around 2 a.m. with her roommate when two college-aged guys started to scream at them. She said had she been alone, she would have been a lot more worried.

"They just start yelling that I'm so fat and they were using all this profanity and they were telling me that I need to keep walking to walk off all these pounds," Molkentin said.

She said while walking back to her off-campus house last Saturday with her roommate, Bekah Richin, two guys asked her about the party she attended. After Molkentin responded that it was "mediocre," she said the two verbally harassed her.

Molkentin said she didn't file a police report because she never got a good look at the men yelling at her. But Director of Campus Safety and Police, Dennis Franks, said that people should always file a report even if they don't have all the details.

"If we don't know about an incident occurring, there's not a lot we can do. So that's why I always encourage people, 'Call and let us know.' Even if you're unsure. If you're unsure, you should probably call us. We can come and check it out," Franks said.

Even with safety measures like the blue emergency lights and Safe Rides, Elon students should still be careful.

"I was definitely surprised it happened at Elon. I'm from Cleveland and on the East side of Cleveland this seems very normal. I would expect this on a daily basis. But definitely not here at Elon," Molkentin said.

Taking that extra step to make sure someone always knows where you are, can really make a difference.

"A lot of it is just friends helping friends and calling us if you need help. That's what we're here for," Franks said.

If you're ever feeling unsafe on campus, Chief Franks says campus security officers are happy to escort students home any time of the day. All you have to do it give them a call at 336-278-5555.