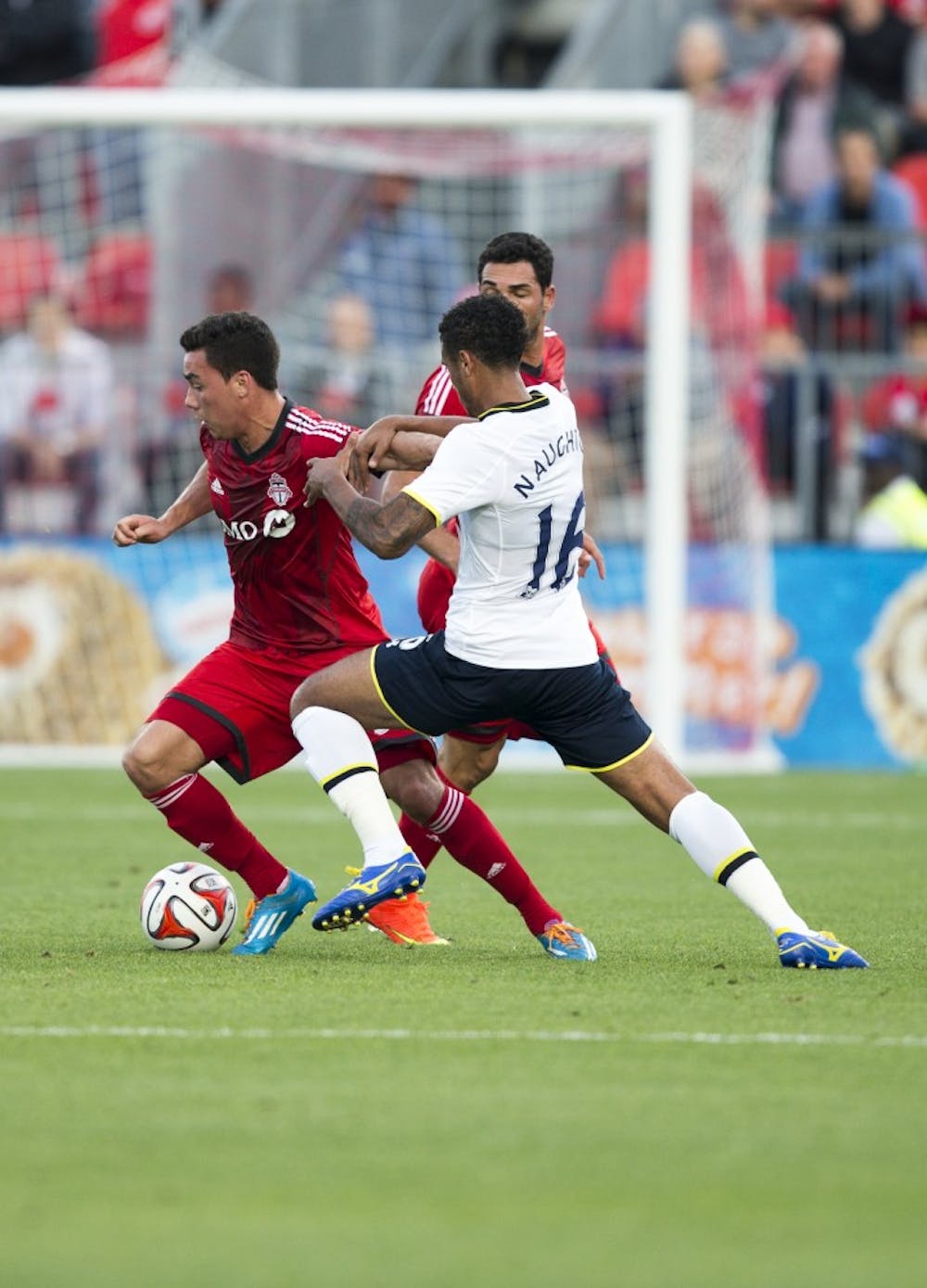 Lovitz shields the ball in a friendly against Tottenham Hotspur. Photo Courtesy of Paul Giamou and Toronto F.C.

Leading up to the MLS SuperDraft in January 2014, Lovitz, who graduated from Elon in 2013, was not sure he would even hear his name called. He was recovering from a major knee injury that caused him to miss the MLS Draft Combine and play at 80 percent for most of the 2013 season. So when he got the news from Toronto F.C. saying the team was selecting him as the 24th overall pick, he was ecstatic to say the least.

"I didn't know if I was going to get drafted at all, so to be drafted, and taken that high, was incredible," Lovitz said following Toronto's 3-0 loss at D.C. United on July 30. "When I found out, I was very emotional and it just took my breath away."

But Lovitz was still a rookie coming off of a serious injury and was by no means guaranteed a spot on Toronto's roster.

"I'd never been to Canada before that so it was an interesting change," Lovitz said. "New country, new currency, new phones, new everything. I certainly got smacked on my first phone bill so that wasn't fun, but I've tried to sort that out with the family plan, but everything has been great. Toronto is an incredible city and the team and organization held my hand and made sure I was accommodated extremely well at this club and they didn't take it for granted."

After signing with the Reds in March for the MLS minimum of $36,500, Lovitz was loaned to the Wilmington Hammerheads of the USL Pro League to start the season. The Hammerheads are a third division team in the United States Soccer Federation.

With the move, Lovitz thought the plan was for him spend the entire USL Pro season with Wilmington and then move up to Canada to finish off the MLS season.

"I knew that at the very least I would be back up after the USL season was over," Lovitz said. "That I'd have a short amount of time to get myself in the conversation for the upcoming season next year."

Instead, Lovitz played a mere five games with the Hammerheads, tallying a goal and an assist, before being recalled to Toronto due to injuries on May 12.

Two days later he made his Reds debut, coming on for Kyle Bekker in the 64th minute of a penalty shootout win against the Vancouver Whitecaps in the second leg of the Amway Canadian Championship semifinals.

From there, Lovitz never looked back. He impressed his manager and teammates alike while playing significantly on the field and occasionally spot starting over the last few months.

"He's a young kid that is training hard and playing hard and getting better every day," Toronto Manager Ryan Nelsen said of Lovitz. "He's playing well against experienced players and has had some good matches for someone still playing at university last season."

"Daniel comes out and works hard every day and keeps improving," said United States International and Toronto F.C. midfielder Michael Bradley. "That's all you can ask for from the young guys and I think he's going to be a good player."

Following his debut, Lovitz took part in 13 of Toronto's following 17 games. He started both legs of the Canadian Championship final against Montreal Impact (the Reds lost 2-1 aggregate) and tallied an assist in the first leg off of a corner kick.

But while he had been at the MLS level for more than two months, it wasn't a competitive match that showed Lovitz how far he'd come in such a short time. Instead, it was a friendly match against English Premier League power Tottenham Hotspur.

During the 3-2 loss, in which he played all 90 minutes, Lovitz intercepted a pass and found Andrew Wiedeman with a beautiful through-ball for a goal.

"It's incredible, hard to put into words really," Lovitz said about his assist against Hotspur. "It's just one of those things that happen and you get to the end of the game and remember that it happened and it kind of made me step back an go 'wow' and think about how far I've come in six months."

"What I noticed is [Tottenham] does the little things right," Lovitz said. "I'm just going to go out and train hard every day and do my best and hopefully I can get to that level."

Luckily for Lovitz, he has a few world-class teammates that are more than willing to help out the younger players like him.

"All the high profile guys are also incredible people and are invested in helping us develop, the younger players especially," Lovitz said. "The international players, Michael [Bradley], Jermain [DeFoe], Dwayne [De Rosario], and the guys that have been around a lot like Steve [Caldwell] and Brad [Orr] have been huge in terms of my development and helping me remain confident amid everything going on."

As his career continues to take off and he sees more playing time on a crowded Reds' roster, Lovitz stays focused on making the most out of every opportunity he gets.

"I've just got to keep my nose to the ground and grind out each day, and week, and month and hope to stay around and stay in the conversation," Lovitz said. "When there are opportunities I hope I can continue to make the most of them and really put my foot down and make myself a much more serious contender for a first-team spot"

And his focus on improving his game and forcing his way into the first-team conversation has left Lovitz too busy to try out his own character in the FIFA 2014 video game.

"I haven't actually gotten on the sticks yet and played with my avatar," said Lovitz, a 54 overall in FIFA 2014. "I usually rely on friends and family to shoot me texts and tell me how bad my stats are. I've just got to keep playing hard in real life and hopefully my character's ratings will progress"