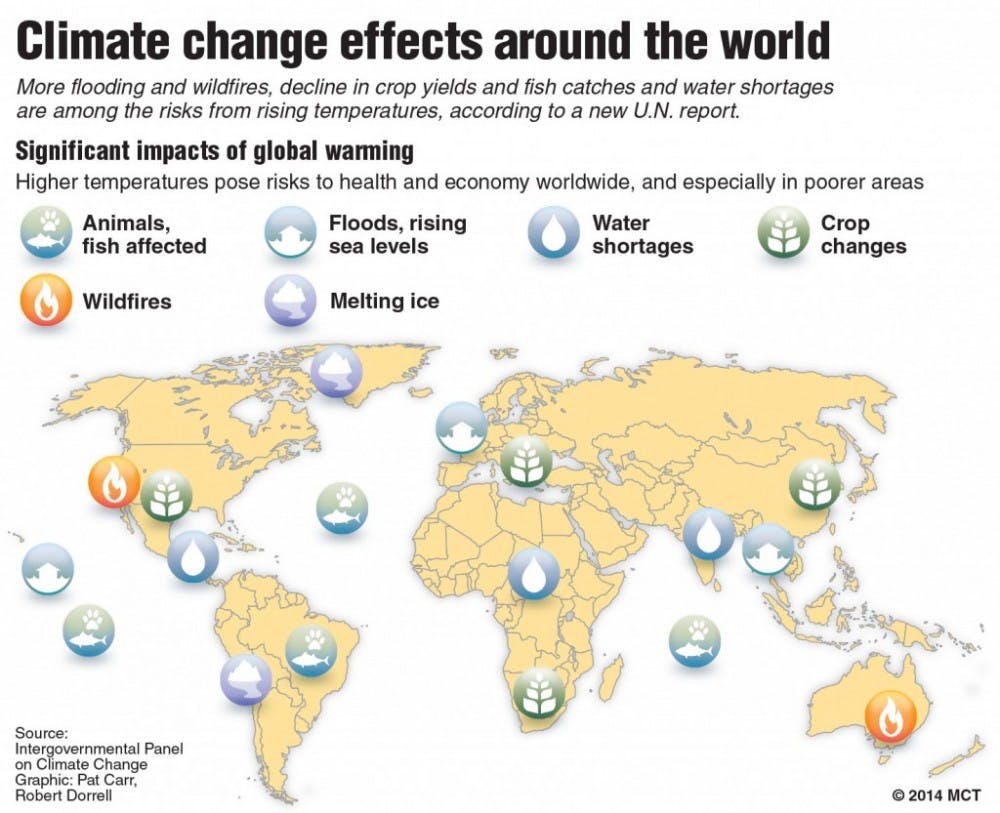 Students and faculty were invited April 9 to debate and discuss climate change and pick apart why it’s dividing the country.

For those who deny climate change, it is a scientific falsehood that could derail needed economic investment. And for those who believe in it, climate change is one of the largest threats to the environment and humanity the planet faces.

But only one student came to the discussion in the Numen Lumen Pavilion.

Randy Jackson, a sophomore marketing and entrepreneurship student at Elon University, defined himself as an environmentalist who believes in conservation and said he seeks out information on his own to come to conclusions on climate change.

“When I learned that Shell spills the equivalent of the Exxon-Valdez in Nigeria every year, I realized that people aren’t paying attention,” Jackson said.

On his specific views on climate change, also known as global warming, Jackson said he believes that climate change is natural, but that human contributions are speeding up the process.

“I’ve seen the core samples and carbon-dating and that all points to natural variances,” he said. “But I do think we’re contributing.”

Scott Morrison, assistant professor of education at Elon, led the discussion and said that even disagreements over the causes of climate change — mostly man-made versus partially or not at all man-made — impact the policy surrounding the solutions.

“If we disagree about what’s causing it, that’s going to change how we mediate it,” Morrison said, pointing to carbon dioxide and how much of its human-led production comes from coal power plants and other ways of generating energy. “If that’s not the cause, we don’t need to close them down.”

Morrison said he is not a climate scientist, but instead follows the communication of environmental values and

environmental justice to try and find the source of disagreement on climate change. Part of the source Morrison pointed to is the lack of effective science teaching.

“Unless the science was communicated to us, it might not be on our radar,” he said.

Jackson said this is why non-partisan science is necessary to get the message of conservation out to a larger audience.

“We need more Neil DeGrasse Tysons running around saying, ‘Hey, this is real,’” he said.

Merritt Chesson, a graduate student who interns with the Truitt Center and helped Morrison put on the event, said economics play a skeptical factor.

“The money might be in gas, oil and coal. If environmentalists say these things are harmful, people might want to deny that,” Chesson said.

Beyond just economics, Chesson said that fossil fuels are a major part of people’s lives now.

“The system we have in place would take a lot of effort to change,” she said.

Morrison said that the majority of the scientific evidence and the consensus of climate scientists is that climate change is not only real, but that humans contribute to it. This theory of anthropogenic climate change reaches back to the 1800s.

“When we have an idea in our head and new information tells us differently, it doesn’t match our frame,” he said. “It doesn’t matter how much science you give someone if they’ve got that frame that global warming isn’t happening.”

Morrison said that most political action on the climate change denial side comes from the Republican Party and conservative political groups and media, while Jackson added that more centrist networks like CNN and typically left-leaning networks like MSNBC also give airtime to climate denial.

“Conservation should be the position of the Republican Party,” he said.

Ultimately, Morrison said that information about climate change will reach people, if not through politics and the media, then through experiences.

“We’ll all feel it at some point,” he said. “Whether it’s droughts in the West or heavy rainfall in the mid-west or swarms of insects in the South.”