Kickin' It With Colie: Fundraising for soccer player with cancer 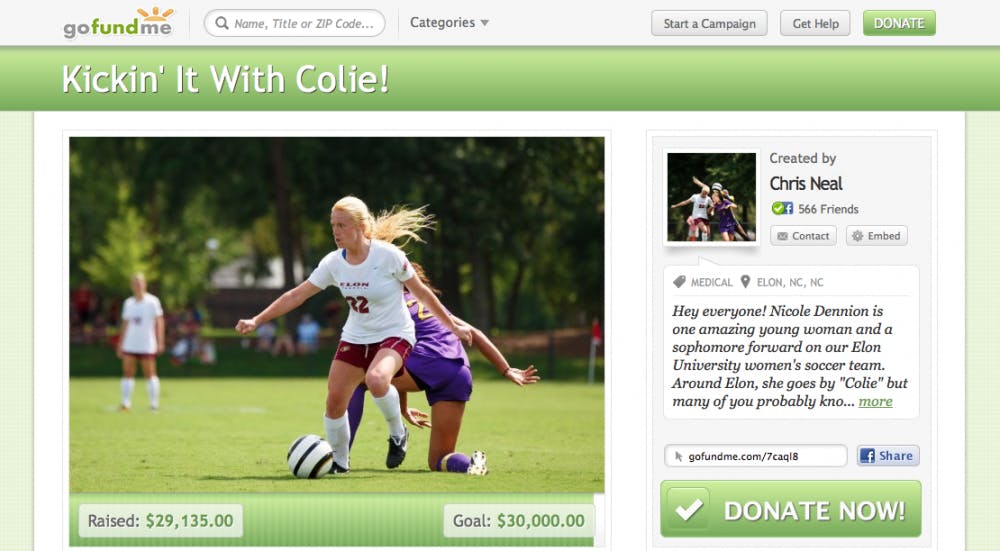 Students are coming together to show support for Elon's Women's Soccer player Nicole Dennion. Dennion was diagnosed with Ewing's Sarcoma in February, which is a type of bone cancer. The news for Dennion and teammates was a shock.

"It was hard to hear and it was really hard to accept at first, just because you never expect it," said teammate Kate Murphy.

Although the news was hard for the soccer team to hear, everyone on the team has kept a positive attitude.

Coach Neal and the team started a GoFundMe account to help raise money for Dennion to ease the financial burden. But the support isn't only coming from the Elon's soccer team. Many universities' women's soccer teams have supported Dennion as well.

"It means the world to me," Dennion wrote in an email interview with ELN. "Knowing that so many people in the Elon community and the soccer world are supporting me helps me so much."

Both Coach Neal and Murphy said that this experience has brought the team closer together in a positive way.

"A lot of times you take things for granted and this has just shown us that it, every single day, is a privilege and we need to take advantage of every opportunity that we are given because it can be taken away at any moment," Murphy said.

Dennion will receive treatment at the Fox Chase Cancer Center in Philadelphia. She said she is ready to face the challenges laid out ahead and looks forward to the day that she returns to the team. To donate to Nicole Dennion's cause, please visit Dennion's GoFundMe site.