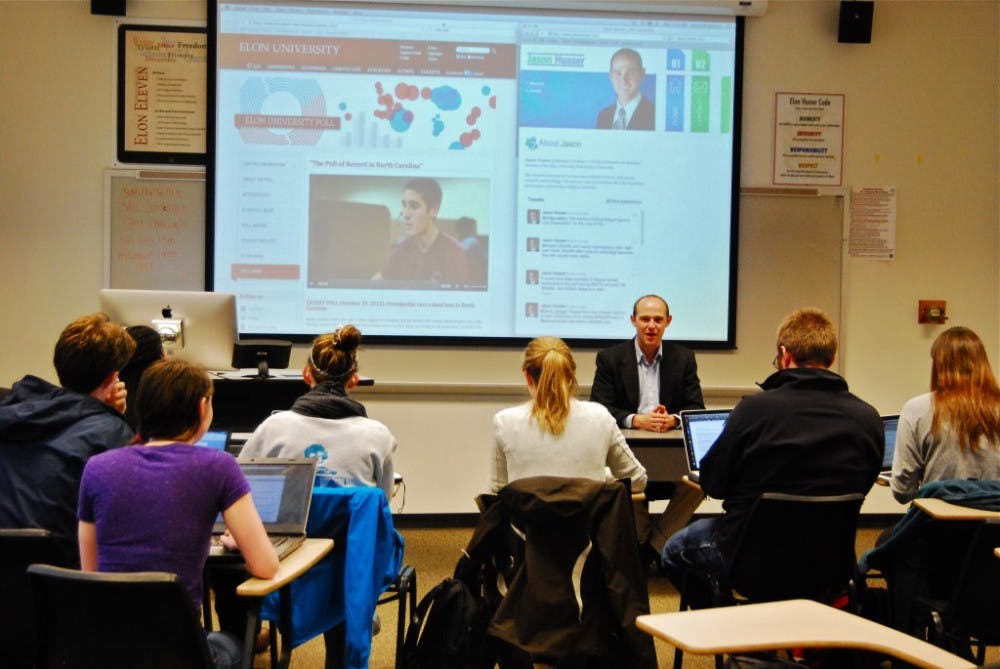 While politicians like Gov. Pat McCrory and President Barack Obama rose in voter support over the past four months, the latest Elon University Poll shows Sen. Kay Hagan, D-N.C., and Speaker of the House Thom Tillis, R-N.C., are less popular among North Carolinians.

Forty-eight percent of poll respondents said they disapprove of Hagan’s job performance, compared to 43 percent in the November poll.

Similarly, 33 percent of respondents had an unfavorable opinion of Tillis, compared to 31.9 percent in November.

At the same time, Obama and McCrory now have 38.9 and 35.6 percent approval ratings respectively, up from 37 and 33.3 percent in November.

The election increases the visibility placed on both candidates, hypothesizing that many voters may not even be able to name Burr right now because he is not running for re-election.

Jason Husser, assistant director of the Elon Poll, said the swings in Hagan and Tillis’ support will increase when the Republican primary is over. He attributed Hagan’s drop in approval ratings to campaigning that has started against her.

“Obama gets negative ads too, but he can give a speech and get on any network he wants,” Husser said. “It’s not as easy for Hagan to get press.”

While Tillis’ support dropped, the poll found that more voters — now 38 percent — recognize him by name, up 10 points from November.

Fernandez said early name recognition is key for a candidate because it allows him or her to build a narrative with voters.

“You have to define who you are or your opponent will,” he said. “McCrory did a good job of that. He talked about how he was a business leader, the mayor of a Democratic city and a pragmatist. And a lot of Democrats voted for him.”

Husser said that while incumbency rates for House of Representative members are very high, it’s harder for a senator to keep a seat.

Both Husser and Fernandez said Tillis is the likely winner of the Republican primary, and he will start working to downplay or redefine his relationship to the General Assembly, which has a 45.5 percent unfavorability rating in the latest Elon Poll.

“My prediction is that we will see a toned-down General Assembly this year because they want a Republican to win the senate seat,” Fernandez said.

In addition to asking North Carolinians their opinions on various political figures, the Elon Poll asked voters if they support or oppose the legalization of marijuana, with 51 percent opposed.

While 54 percent of those aged 18-30 support legalization, compared to 30 percent aged 41-50, Husser said this does not mean marijuana will eventually become legal in North Carolina.

“A lot of those middle-aged people are children of the 60s — pot smokers,” he said. “But these are people who changed their mind, so it’s hard to predict what happens in the future.”

He said that, with anything new, the default reaction by the public is “to say no,” but the future of marijuana will be determined by what data comes out of the states where the drug is now legal: Washington and Colorado.

“If there’s a lot of irresponsible use in Colorado, it could affect the whole country,” he said.

In the February 2013 Elon Poll, 76 percent of respondents said they supported allowing doctors to prescribe medical marijuana, but Fernandez said the example of “cancer” as one of the diseases a doctor would prescribe marijuana for could have affected responses.

“Once you start throwing cancer out, it changes people’s responses,” Fernandez said.

He also hypothesized if the poll had asked if voters supported decriminalizing marijuana, which would not give jail time to possession of small amounts of the drug, a majority of North Carolinians would have supported that as well.

Fernandez also noted that North Carolina has different laws and policies than states like Washington and Colorado when it comes to alcohol.

“When the world is changing, people can hold onto their beliefs more firmly,” he said.

Fernandez also said the passage of Amendment One, a ballot initiative that included a ban on same-sex marriage in the state’s constitution, could have communicated to  people are against same sex marriage that “it’s an acceptable way of thought.”

Over the course of years of polling, Husser said North Carolina is moving toward same-sex marriage, though the state itself is far from ready to legalize those marriages any time soon.

“There may be a lagged effect, but our political system tends to change with public opinion,” he said. “On gay marriage, it’s not a matter of ‘if,’ it’s ‘when.’”