Board of Aldermen detail proposed changes to downtown Elon 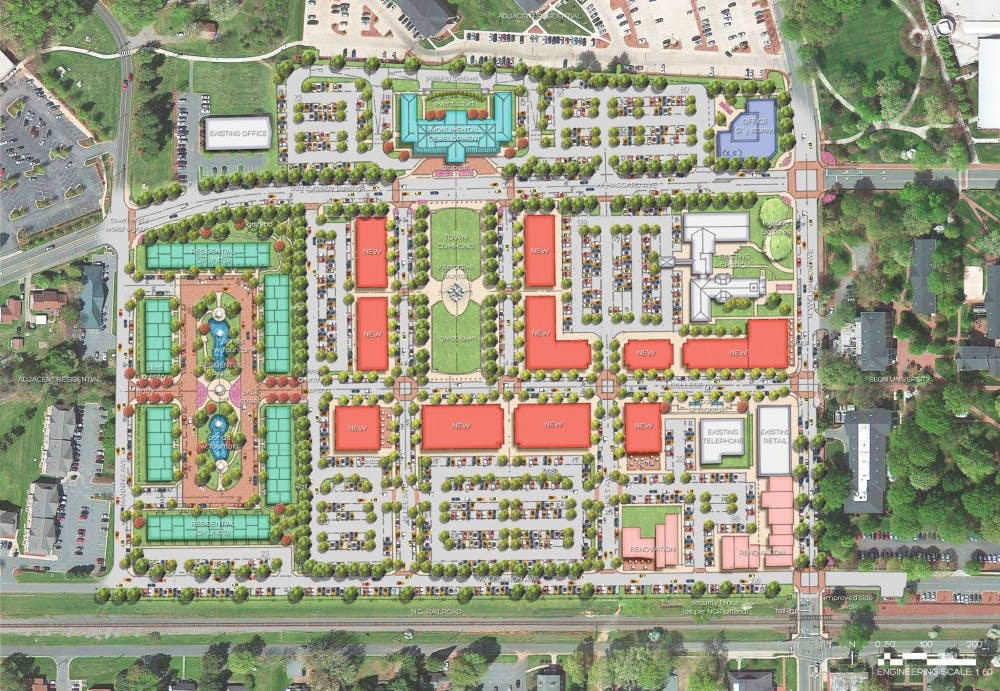 When it comes to downtown Elon, Alderman Mark Greene said it isn't about the students.

"If you build downtown for the students, it will fail," Greene said. "We want things that will appeal to town citizens."

Greene hopes the $160,000 proposal created by Kaufmann Associates will appeal to residents of Elon and create a bustling downtown.

The proposal's cost was split between Elon University and the town of Elon. It outlined major changes for the downtown landscape.

Kaufmann Associates produced a several-million dollar project that, if approved by the Board of Aldermen, would result in major construction.

"The several million dollars will be raised in cooperation with partners, investors and companies," Greene said. "We will not relay that cost to the taxpayers."

About a year ago, the town of Elon selected Kaufmann Associates, based in Lancaster, Pa., to lead the revitalization project.

A board consisting of Greene, Alderman Davis Montgomery, Elon Town Planner Sean Tencer, Elon University Senior Vice President of Finance Gerald Whittington and Interim Town Manager Ed Wyatt was formed to come up with ideas on what they want to create downtown.

"We didn't want this plan to sit on the shelf," Greene said. "But this is a marathon, not a sprint."

According to Elon's downtown master plan, the goal is to create a new district with its own recognizable limits.

"We want this to look different than Elon University but in concept with them," Greene said. "Elon University is top notch and we want to mirror that."

The master plan calls for the creation of a town commons. The proposed location is across from the row of townhouses on West College Avenue. The objective is to make the town commons a "central park" of downtown with a large grass area that could be home to events like Alive After Five.

A residential park is proposed in the current location of the Phoenix Villas. The master plan calls for the park to be a "communal place of leisure," surrounded by new residences.

A "Monumental Development" is proposed for the land that sits next to Skid's. According to Greene, the goal is to create something similar to the Carolina Inn in Chapel Hill.

Skid's and the Kangaroo Express are left out of the plan. Instead, a building titled "office" sits in the spot of Kangaroo, and there is a parking lot in place of Skid's.

There are extensive plans for construction of new restaurants and businesses. The proposal calls for businesses and services that appeal to town citizens like a drug store or dry cleaners.

If the proposal is followed completely, many off-campus houses and apartment complexes will not exist when it is complete.

According to Greene, the town of Elon will have to hire someone to negotiate with landlords and tenants on buyouts.

"It will take some time for things to go through," he said. "Certainly folks that have establishments will want to benefit, and they will from a bigger downtown."

Greene says plans are in place to replace the demolished houses and apartment complexes with new ones.

According to Kaufmann Associates' plan, white oak or northern red oak trees are preferred to replace the current trees on North Williamson Avenue.

The plan also calls for buffer trees in between the town center and residential property, as well as along the train tracks. Southern magnolia, Nellie Stevens holly, foster holly, willow oak, elm, maple and ash trees are being considered to be planted as buffer trees.

Parking meters could soon come to the town of Elon. The master plan recommends curbside parallel parking in the commercial area to have "metered parking for a nominal charge."

An emphasis on biking is proposed, with several special zones for bikers to lock and leave bicycles. Haggard Avenue would also expand to include a bike lane.

A public hearing on this plan will be held March 3 at the Elon Town Hall for input, comments and concerns about the project. The proposal will be voted on by the Board of Aldermen on March 11.

"It is highly unlikely, if approved, construction would start this year," Greene said. "The earliest I could see is 2015, and even with that, it could take 10 or more years for the full project to be completed."

According to Greene, the biggest obstacle could be zoning changes. Under the master plan, a new zoning district, Town Center 1, is proposed which would allow buildings to be a maximum of four stories and 30,000 square feet.

The new zoning district would replace the current area zoned as "town center." Town center allows for buildings to be three stories tall and 15,000 square feet.

No matter what happens in the coming weeks, Greene hopes for new life downtown.

"There isn't a defined downtown," he said. "That is something we really want to change"