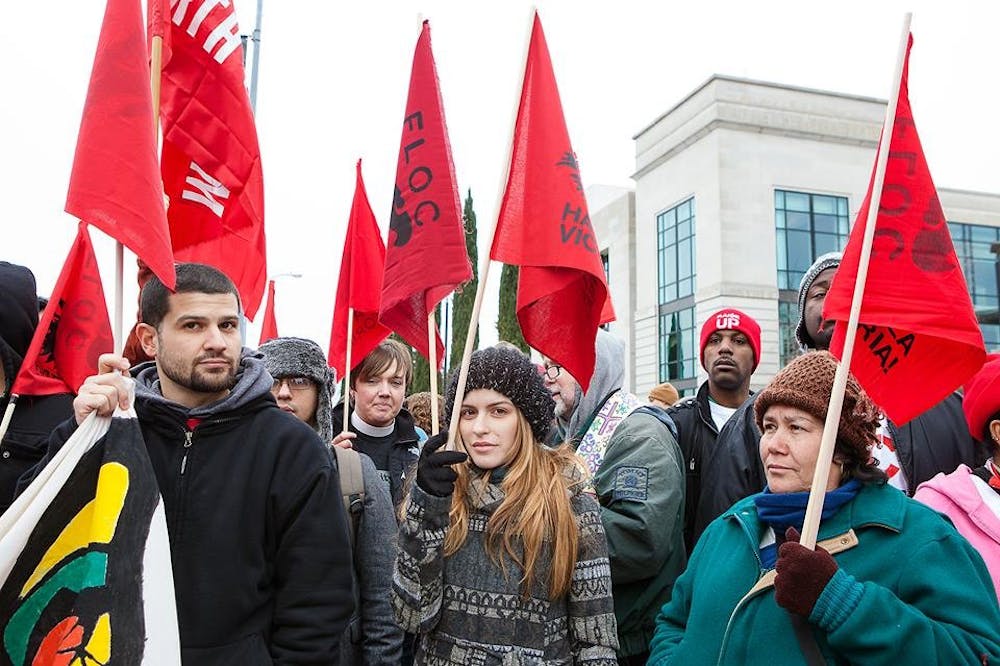 Thousands of students were among the rowdy crows. Photo submitted by Kaitlin Barlow.

After months spent writing their congressmen, banging on doors throughout the capital and launching a massive social media campaign, an estimated 80,000 to 100,000 marchers converged on Raleigh for the “Mass Moral March” Feb. 8.

Toddie Peters, coordinator of the Poverty and Social Justice program, required students in two of her classes to attend the march with provided transportation or write a paper on the movement’s history or themes. Out of a combined 40 students in both sections, only seven chose the paper, an attendance rate Peters said she was slightly surprised by and quite proud of.

“For most of them, they were learning on the ground,” Peters said. “I’m not sure how many of them had any background on what was going on. For the majority of them this was really sort of learning about what the issues were, seeing social justice in action and applying these issues, these themes to what we’re talking about in class.”

Though the North Carolina NAACP sponsored the march, the protestors who thronged the downtown streets came largely from grassroots sources — student-led coalitions and democracy initiatives. The N.C. Student Power Union (NCSPU), founded by a group of students through the University of North Carolina school system to combat budget cuts and tuition hikes in public education, sent dozens of activists to the march.

“The General Assembly has done things to attack groups that make up my generation in North Carolina, perhaps one of the most diverse generations of people around the country,” said Matt Hickson, one of six founders and the director of NCSPU.

From ‘civil disobedience’ to democracy

Calling the Moral Monday movement a “civil disobedience” campaign, Hickson said the march was meant to empower those he calls “the marginalized” – people of color, undocumented immigrants, the LGBTQ community and others living in a state with a “reputation for discrimination.”

Those Hickson calls marginalized may be bystanders to democracy, according to sophomore Claire Lockard, a member of Elon Feminists for Equality (EFFECT). The feminist group helped gather Elon students to attend the march in Raleigh.

Instead of traditional images of discrimination ­— the Ku Klux Klan and segregation in the old South — Lockard suggested racism hits hardest now in the face of democracy: the voting booth.

“Much of why I marched is to protect the rights of everyone, and I mean everyone, to vote freely and without restraint,” she said. “To pass a law that would make it harder for someone to vote is simply nonsense. There’s no other way to put it.”

The bill Lockard referred to was signed into law by McCrory in August 2013. Among other provisions, the controversial voter ID law required voters to show North Carolina-issued identification, outlawing college IDs, as well as out-of-state driver’s licenses.

To Democrats who have suggested voter fraud is a meager or non-existent problem within the state, McCrory emphasized that a valid ID is required to use almost all government services in North Carolina.

“The need for photo ID has been questioned by those who say voter fraud is not a problem in North Carolina,” he said in an August 2013 statement. “However, without the higher level of identification a photograph provides, is it possible to know? Even if the instances of misidentified people casting votes are low, that shouldn’t prevent us from putting this non-burdensome safeguard in place.”

But the North Carolina NAACP and Barber have something else to say entirely: that voting is the foundation of the American democracy, that depriving someone of the right to vote can’t be justified.

“We know justice must be fought for on many fronts, in the court room, at the ballot box, and also in the streets,” Barber said in a statement calling millions of North Carolinians to action.

Locked up for morality: civil engagement

Depending on who is asked, the Moral Monday movement has been going on for as long as eight years and as few as two, but everyone affiliated with the movement seems to agree on one thing: Moral Mondays were founded on a shared sense of civic responsibility to rebuild what protesters see as a broken political system.

In the time since, the protestors haven’t always been welcomed with open arms. A rap sheet of all the people arrested for crimes related to the movement would stretch dozens of pages. Almost one thousand people were arrested, most of them for trespassing, during 2013 alone.

The majority of people arrested intentionally outstayed their welcome inside government buildings in Raleigh, and McCrory has said the police had no choice. No arrests, though, were reported in Saturday’s march, which stuck to the streets.

Hickson said the people arrested went into it with the full knowledge that they would probably be jailed, but were willing to do so to become martyrs for the cause, to let their message ring loud and clear.

“There’s a clear precedent for people to occupy the halls of the General Assembly in order to be heard by lawmakers who might not be heard by regular folks,” he said. “I’m willing to put my body on the line, spend a night in jail in order to tell the state and the legislators that me and my neighbors don’t believe in what it’s doing.”

Toward the end of 2013, the McCrory administration tried to move protestors off  Capitol grounds and onto Halifax Mall, a grassy open space downtown, but a Wake County judge overturned the administration’s decision in late December, giving the go-ahead for Saturday’s march to spill through the streets — following a pre-determined route.

While Hickson’s young group of energetic and politically-active, well-informed citizens may grab all the headlines for protesting, they may remain a minority in the political landscape among the youth in the United States.

“I wish that I could say we are seeing some generational shifts,” said Jason Husser, assistant professor of political science and assistant director of the Elon University Poll. “But the reality is that young people today aren’t particularly that much more involved than previous generations.”

But according to Peters, exposing students to political dissent, and then allowing them to form their own opinions, may be a stepping-stone toward attracting this generation and those to come to politics.

“I tell my students my job is to make them think critically,” she said. “It’s not my job to tell them what to believe and advocate for in that sense. Your purpose in this class is to figure out what you believe, and to develop reasons for supported arguments using evidence and critical theory.”

Funding the future of education

One of the NAACP’s most important prerogatives, Barber said Saturday, is reversing the budget cuts that have been made to the state’s public education system under the McCrory administration.

Perhaps in response,  McCrory announced Monday Feb. 10 proposed raises to the salaries of 32,000 of North Carolina’s 95,000 public school teachers, or about one-third. Entry-level teachers in the state system currently bring home $30,800 per year. The proposed raises would increase that to $35,000 by 2015.

“I’m concerned about the school system as a whole right now,” Joe Ferrell, principal of Burlington’s Walter M. Williams High School, told The Pendulum in August 2013. “Why would teachers seeking master’s degrees come to North Carolina, where they’re now not rewarded for their work in furthering their own education?”

If the governor’s proposal passes muster in the state legislature, those teachers will again be rewarded.

But teachers can’t teach without students, according to Dhruv Pathak, member of the NCSPU and sophomore at the University of North Carolina at Greensboro. And stopping the upward trend in tuition isn’t enough for Pathak. He said he wants to see an eventual decline.

“Keeping tuition and education as accessible as financially possible is NCSPU’s goal, but also my passion because I know way too many folks that have dropped out because of financial burden,” he said. “We want make sure that the N.C. General Assembly and Board of Governors make efforts to hear students voices about tuition, but also to freeze for now, and eventually cut, tuition.”

NCSPU isn’t only interested in advocating for in state-students, though. Pathak and Hickson both criticized the Board of Governors deliberation to raise the sticker tag on out-of-state tuition by 9.2 percent, a move that will be voted on this month.

“We consider our involvement in education as broad as you can find it,” Hickson said. “We think about how our public schools impact the community, impact students and workers in these schools. We are going to advocate very much against raising tuition that much for out of state students. Our main mission is to protect the integrity of education at all levels, for all people.”

A well-educated populace is the key to sustaining a spirit of social justice, according to Peters, who said the movement's faith elements are a real-life example of the interposition of religious activism and democracy.

“It’s about asking what the actual issues are,” she said. “Social justice includes how people of faith express that faith in public, but looking more broadly at who are the coalition partners, what are they doing expressing or engaging as part of democratic practice and how are they advocating for what they believe.”

Even though student participation isn’t necessarily indicative of political engagement, Husser said the activism is a good place to start for young adults.

“These types of actions and activities, regardless of one’s party affiliation, can lead to long-term political engagement,” he said. “People who tend to engage early on in their life tend to politically engage throughout the course of their life cycle.”