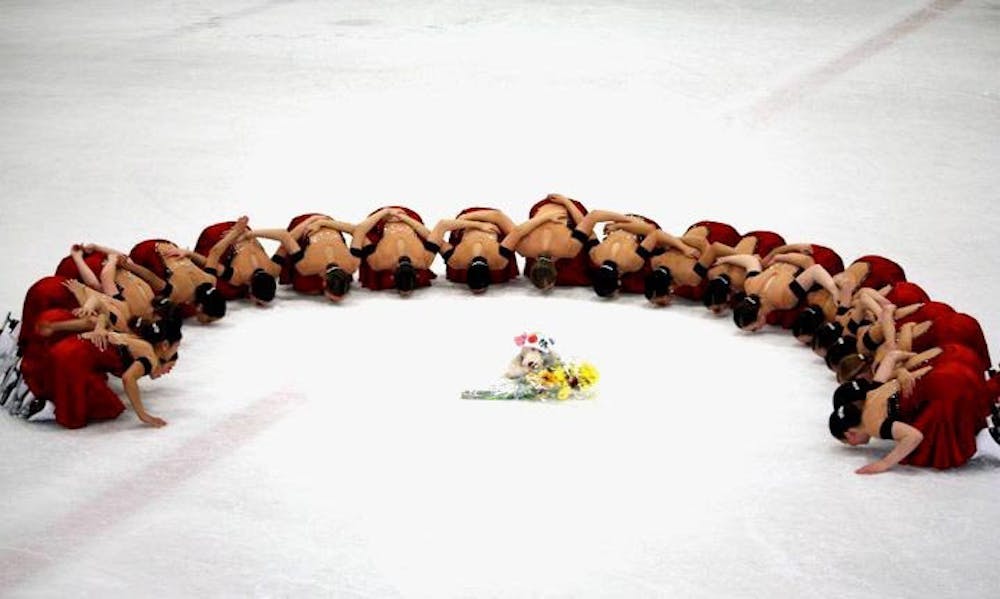 While most encounter international competition through TV, one Elon student experienced it firsthand by competing with her synchronized skating team, Skyliners.

Lauren Snow, a junior at Elon, began to skate when she was 3 years old and then started Synchronized Skating when she was 5 years old.

"It was at my rink, I wanted to get involved with a team sport because I was tired of skating individually and that just seemed like the best fit," Snow said.

What started out as a fun event held by her orthodontist turned into hard work and dedication.

"I skated thirty hours a week: on ice, ballet training, off-ice training. It was grueling," Snow said. "We traveled two hours to practice and two hours back. There were late nights and early mornings, I used to skate at 4:45 before school to just skate."

Snow was not alone; her twin sister, Ashley Snow, competed on the same team along side her. They did everything together from traveling to and from the rink, to standing next to each other, awaiting the judge's scores.

"She was definitely my strongest supporter in skating. I had my family and I had my parents, but having somebody who was skating with you was one of the most memorable experiences," Snow said. "I'm so thankful for her because that's one of the main reasons why we are so close and why we are best friends."

Snow said that competing internationally was an amazing experience from being able to represent the United States to even cheering on the other teams that did not have such a strong support system.

"Competing with all the international skaters really opens your eyes to what other countries are about, what their skating is about like how their team works compared to ours, and their sportsmanship compared to ours. The Italy team and the Australian team, I absolutely loved them: AUSIE! AUSIE! AUSIE! OY! OY!OY! [their chant] I loved it!" she said.

Snow competed twice with the Skyliners at Worlds taking fourth place and third place. After competing at Worlds, Snow realized she had made it as far as she could go in synchronized skating. She decided that she would go to college and focus on her studies. Snow is now studying strategic communications and works at Live Oak.