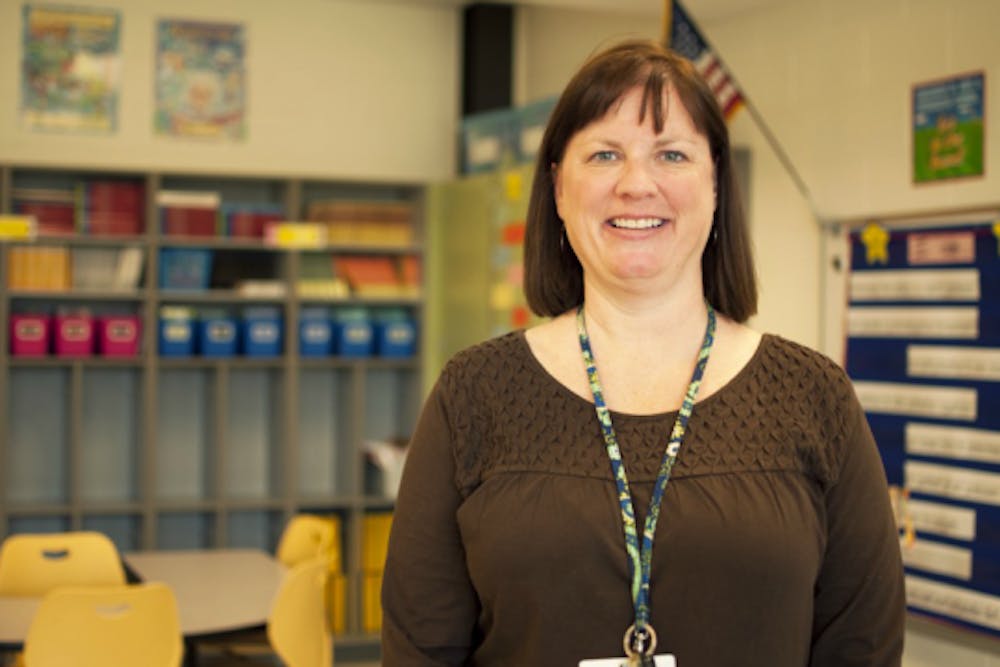 Amy Daughtridge is the AIG Facilitator at Sandy Ridge Elementary School in Durham, N.C. Please click the image to see a slideshow with audio.

This past summer, the North Carolina General Assembly altered the face of public education through various budget cuts, program changes and salary alterations. The new budget, passed in 2013, eliminated supplemental pay for advanced degrees, bonuses based on student gains and experience-based raises.

The budget also ended teacher tenure which is, at its core, job security for experienced teachers.

“One of the problems will be recruiting and retaining high-quality teachers for us in the school system because salaries have been pretty much frozen,” said Christine Kushner, vice chair of the Wake County Board of Education in Raleigh, N.C.

Legislators who approved the changes said the old system rewarded the wrong things, such as credentials and longevity, rather than rewarding teachers for classroom results. While this describes what was written in the changes, the budget includes only small steps toward performance-based pay.

“We have done so much good work to be 25th in the nation and we could really recruit top students to teach here,” Kushner said. “Teachers don’t go into teaching for the money, but at the same time, it is a profession. So that is a grave concern.”

According to the News and Observer, school districts are now authorized to give 25 percent of teachers four-year contracts that include $500-a-year raises. The 2013-2014 budget does not include any raises for teachers or other state employees, and new teachers must teach for five years before they will receive a pay raise. Currently, there is a state-wide task force to create a more comprehensive plan.

“In many ways, teaching is like missionary work because it’s something you do because you’re called to do it,” said Deborah Long, interim dean of the school of education and professor of education at Elon University. “You believe that it’s important work and you want your life to matter and you want to make a difference in the world. But sadly, we also have a lot of people who feel as though they can’t afford to go into teaching because they want to have a family. They want to send their families to college, and it’s unfortunate that people have to opt out of teaching for that reason.”

“When employers are begging for qualified applicants in a state with the fifth-highest unemployment rate in the nation…that tells me we have a disconnect between commerce and education,” McCrory said to a crowd in August, just days after teachers marched in the state’s capital to protest the changes. “All of us need to come together and eliminate this gap.”

After the July 2013 budget was approved, Governor McCrory created a $30 million innovation fund to provide $10,000 stipends to top 1000 teachers – about one percent of the state’s educators.

This does provide some additional pay for teachers, but many believe the biggest benefit in a change from the government would come from the reinstatement of a supplement for advanced degrees.

Nc general assembly education changes | Create infographics
Amy Daughtridge, the AIG Facilitator at Sandy Ridge Elementary School in Durham, N.C., said she feels much more prepared now to be a gifted child teacher, as she is in the middle of getting her master’s in gifted education through Meredith College in Raleigh. Daughtridge is in the last group of master’s students who will receive their degree with the supplement provided by the state.

“It has made me think, reflect, forced me to a higher level of thinking about my position that I don’t think undergrad would have ever done,” Daughtridge said. “Not only because I was undergrad, but because I was so much younger and I didn’t have the experience I have now.”

Daughtridge said the pulling of higher degree funding is a “slap in the face,” demonstrating to educators that the legislature does not care if teachers get any further education because “anybody can do your job.”

Lauren Kepke, a senior elementary and special education double major at Elon University, is in one of the last groups of North Carolina Teaching Fellows, a group that is required to teach in the state for four years after graduation.

Kepke said that while she is going to teach in North Carolina because she loves it, she wants to see improvements in the state regarding education if the state wants to bring in qualified teachers.

“I would like to see them value the furthering of education,” Kepke said. “If we want to see our education system improve, we need to have the smartest teachers and we need to encourage furthering education. This could be through master’s programs and professional development. That’s where a lot of our cuts are taking place, therefore putting less qualified teachers in situations with more students they are in charge of.”

The North Carolina pay scale ranges from about $30,800 per year for new teachers with Bachelor’s degrees to $65,520 for those with maximum experience and credentials. The UNC system research on North Carolina teachers found that those who had graduate degrees when they started teaching had a large impact on student scores in high school math and English.

For many professors, students, and current teachers alike, the lack of supplement provided by the state for an advance degree was a big change that many, including Long, would like to see changed.

Long wonders how many teachers can afford to get a master’s degree when they know they are not going to get compensated for it.

“We’re concerned about our numbers in the Master’s of Education program,” she said. “They are grandfathering in the students who just graduated and they are setting a May 7 deadline for the next cohort that will be graduating. What we have to do because our students don’t graduate until August is to accelerate their graduation so that they will graduate before the end of January so that they will come in under the deadline. We’re hoping that the legislature and the governor will see the error of their ways and decide that they are going to reinstate that supplement.“

McCrory asked the state board of education in September if it could guarantee extra pay for all teachers now enrolled in master’s degree programs, no matter of when they were planning to graduate. The board, however, said it was not possible.

“Master’s pay for teachers is one education policy I think we can change now,” Gov. McCrory told the board, as reported in the

News and Observer. “…”I’ve worked with my budget office, the Office of Management and Budget. I’ve talked to our budget

director, asking ‘is there any way we can find sufficient revenue, to find money and give them the dollars they deserve?’ My budget director said absolutely.”

The board chairman Bill Cobey said the board could not adopt a policy, but McCrory’s spokeswoman Kim Genardo and senior education adviser Eric Guckian said the state school board could adopt a policy to extend the pay to all students currently in master’s programs.

While this does not extend to all future master’s students, it does fit some of the demands from disgruntled citizens and educators.

“It makes me consider how much professional development is available and how I will continue my education after college,” Kepke said. “It makes me consider if I will continue teaching in North Carolina after I receive higher education and teach for the Teaching Fellows four years. I am afraid that nobody is going to move to North Carolina to teach anymore unless they are moving here for other reasons.”

Daughtridge believes that increased respect for teachers is the biggest need that would prompt the most change.

“I think if we were treated a little more like professionals, including our pay but not just through pay, that perhaps the public would see us a critical,” she said. “We are the reason for all of the other professions, and you would think that would carry a little bit more weight and respect.”