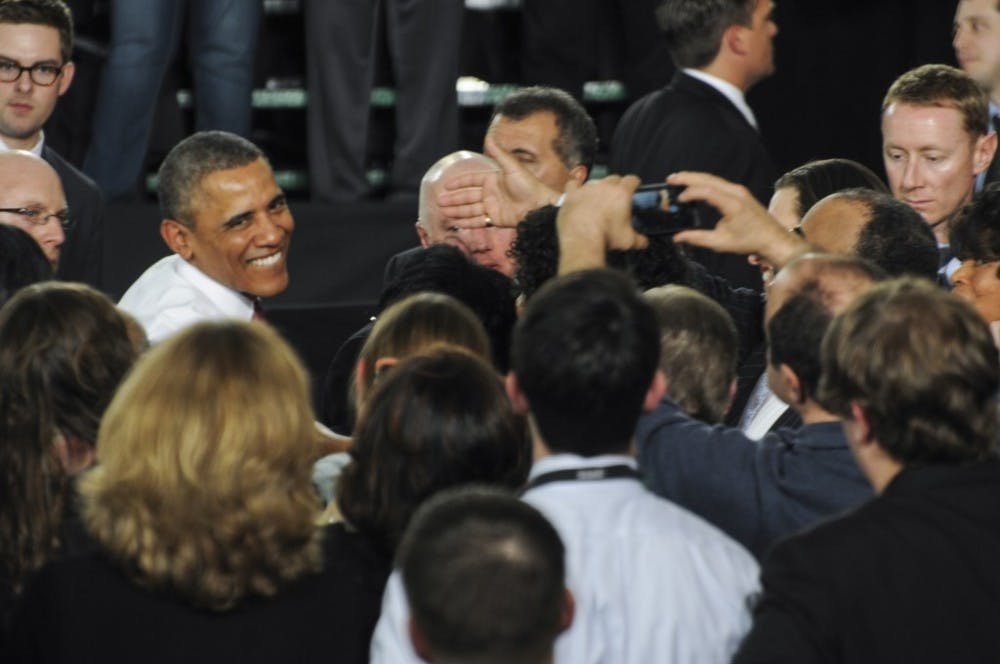 After speaking, the president mingled with students and invited guests before the Secret Service whisked him away.

NCSU will lead a group of six universities and 18 private companies, the Next Generation Power Electronics Institute, in developing smarter and more affordable electronic chips, which run everything from cellphones to industrial motors.

“We’ve got to do more today to connect universities like NC State with companies like Vacon to make America the number-one place in the world to create new businesses and new jobs,” Obama said to cheers from the sold-out crowd of 2,000 inside the J.W. Isenhour Tennis Center.

Vacon is a Finland-based producer of widegap semiconductors, a departure from traditional silicon chips that the president said are up to 90 percent more efficient, because they can operate at higher temperatures and are more durable. The company is one of the institute's 16 partners. Obama toured Vacon's Durham facility before coming to Raleigh.

The institute will invest in “long-term solutions” for developing more efficient technology, which will spur a growth in manufacturing jobs, Obama said.

North Carolina Republicans have criticized the president’s perceived failure to fix the economy after the federal government reported just 74,000 new jobs nationwide in December. But emerging from the recession is a marathon, not a sprint, Obama said, as he pointed out the 80,000 new jobs created nationwide in the manufacturing industry in the last five months.

“This is going to be a long haul,” he said. “We’re not going to turn things around overnight. A lot of jobs were lost. Ultimately, because our people are good and smart and hardworking and willing to take risks, we are going to be able to start bringing those jobs back to America.”

North Carolina Republican Gov. Pat McCrory said the program is a “good pilot” for bringing jobs to the state as he greeted Obama on the tarmac of Raleigh-Durham International Airport Wednesday morning.

The visit was Obama’s third to North Carolina since the battleground state went red in the 2012 election. Though the president’s emphasis on manufacturing was well received by most, the Young Americans for Liberty, a libertarian organization with more than 500 chapters nationwide, welcomed Obama with signs demanding his impeachment.

“We’re protesting his economic policy,” said Ross Bradley, NCSU student and member of Young Americans for Liberty. “Everything he has set up is creating lots of little loops that people aren’t able to jump through. He’s strangling the economy.”

“North Carolina has struggled,” said Brian Fitzsimmons, a Raleigh resident. “Raleigh has struggled. But it is absolutely clear that the president’s willingness to invest in this area will lead to the jobs getting better. We’ve got a lot of innovation, a lot of great people here. We need the direction.”

But the institute is still very much in the planning phase, according to Dennis Kekas, assistant vice chancellor of NCSU and interim executive director of the institute.

“The biggest challenge, and the first step, is getting these 24 partners together and on the same page,” he said. “We need to increase the flow of communication between the institute members and partners. We are still working out contracts, staff and all the components that go into creating a new organization.”

The federal and state government money, totaling $80 million, has already been allotted, Kekas said, but some of the matching $70 million pledged by private businesses is still being negotiated.

A five-year plan is in the works to get the institute up and running, according to Kekas, with the end goal of weaning the institute off government funding and becoming self-reliant.

If all goes according to plan, the first year will launch the program, and the second year will oversee the implementation of technology into products, followed by two more years of research and education on the technology. By year five, the institute aims to be entirely self-sustaining and devoid of government funding.

Obama said he hopes the federal funding will “get the ball rolling,” but the rest is in the “very capable” hands of North Carolina ingenuity and creativity.

“Middle class families that are going to be able to buy the products that result from this innovation will lead to a virtuous cycle where everyone’s working together, and no one’s left behind,” he said.

But as state Republicans are quick to counter, the president’s promise is less than reassuring for those who are currently unemployed. Obama responded in an aside by urging Congress to pass an extension of long-term unemployment benefits. The bill for the benefits is currently gridlocked in the Senate.

“Folks aren’t looking for a handout,” he said. “They’re not looking for special treatment. There are a lot of people who are sending out resumes every single day, but the job market is still tough in pockets throughout the country. People need a little support, a little help.”

While the fate of the bill remains up in the air, the president said he's no longer interested in waiting at the whim of Congress.

"Where I can act on my own, without Congress, I'm going to do so. And today I'm here to act," he said.

Obama encouraged North Carolinians to “get going” on harnessing the best and brightest of the state to lead another manufacturing revolution with electronic chip technology.
NCSU senior Daniel Salo said he is ready to go.

“We’ve been selected here in Raleigh," he said. “But at the same time, it’s a tough road to recovery ahead for the state and for the nation. It’s going to take technology, creativity and a desire to embrace the challenge.”