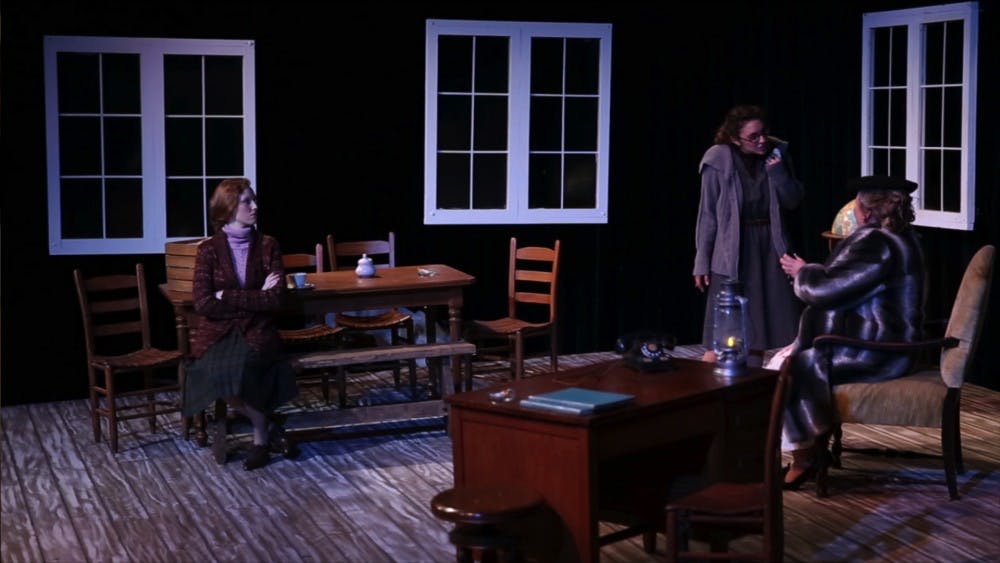 Every year, hundreds of students come out to the Organization Fair to see what more than 250 student organizations on campus have to offer. We took a deeper look into how five areas of those student organizations have grown and changed over Elon's 125 years. Those organizations are: student media, the center for the arts, Greek life, service, and Student Government Association.

Elon was founded as a Christian school so it's no surprise that its first student organization was the Young Men's Christian Association (YMCA). Early on in Elon's history, literary societies became a part of the social scene on campus.

According to Elon A History and Traditions, any student above second academic who is not an active member of one of the literary societies is required to write an essay of 1,000 words, every two weeks.

This led to the formation of Elon's first student publication in 1891, Elon College Monthly. Current Dean of the School of Communications thinks student media remains a core of the university.

As the years changed have changed so have the publications, from The Elon College Weekly to the Maroon and Gold, Elon's two student news organizations are Elon Local News and The Pendulum.

Senior Rebecca Ianucci was the editor-in-chief of The Pendulum in the fall.

"I think people expect to be able to know what's going on around campus. There are different corners of campus where your group of friends might know what's happening with their friends and with their classes and their campus organizations but there needs to be some way to get general knowledge about everyone else and what everyone else is doing" Ianucci said.

Journalism has not been the only part of student media on campus. The yearbook, Phi Psi Cli  started in 1913. The arts and literary journal, Colonnades first printed in 1937 and the radio station , WSOE hit the airwaves in 1978.

Gerald Gibson is a current professor in the School of Communications and former WSOE adviser.

"I think it was a really positive step to have a radio station to have a newspaper that students operated to give them a voice," Gibson said..

Dean Paul Parsons also thinks that as student media has grown on campus, so has students' passion.

"We like to call this building back here the building that never sleeps because when I come in late at night, when I come in on a weekend there are always students present," Parsons said.

Today studios A and B, used for different Elon Television shows, are in McEwen. But there used to be a television studio in the Black Box Theater in the Center for the Arts.

When the Center for the Arts first opened in 1987, communications students used to film some of the productions on camera.

The School of Communications and Center for the Arts used to share the same building.

"One by one over the years departments have moved out and we've expanded into it," Fred Rubeck, current Performaing Arts Department Chair, said. "Now we're at the point where it's just music and us."

The Center for the Arts is now home to Elon's acting, dance, and theater students.

The Playmakers of Elon College began in 1932. Past plays at Elon include, "Madea", "See How They Run", and "Midsummer's Night Dream". At the turn of the century, acting became a Bachelor of Fine Arts.

Sophomore Tony Weaver is an acting major at Elon.

"I can watch a play and it can completely change who I am as a person within that three hour block of watching people say words on stage. So being able to reach into people's souls and change them hopefully for the better, that makes everything that I do worth it," Weaver said.

Music theatre became a major in 1992 making it the oldest BFA in the Center for the Arts. For Elon's 125th anniversary, performing arts students put on a production of "Ragtime".

Sophomore Robyn Dalina worked in the "Ragtime" production as a stage manager.

"One, you have to love it and two, we wouldn't be here all the time if it wasn't a great place to be," Dalina said.

Dance became the newest BFA at Elon in 2007. All students in the program learn to dance and choreograph.

"I love coming here every day. This is basically where I spend all of my time. This is where all of my friends are. And this is where I perform, so basically this is my college experience," Champagne said.

Elon has its own chapter of Alpha Psi Omega, the national theatre honor society but going beyond just the academic societies, Elon works to expand its sororities and fraternities.

"I think you have people that don't understand Greek organizations and really see no value in them and think of them as people who pay to have friends or people who pay for some sort of experience," Shana Plasters, Director of Greek Life, said.

She sees how Greek organizations can benefit many students' college experiences.

"I think you have other people who, this is what got them through their undergraduate college career," Plasters said.

Residence life worker and 1979 Elon graduate Amy Vaughn was the sorority's first president and TKE's sweetheart. Today, she is one of the sororities advisers and believes Greek life at Elon doesn't end when one graduates.

"Even though time may separate for a little bit or several years, when you get back together its like the time never elapsed, its like you didn't skip a beat and you're right there," Vaughn said.

There are currently nine national fraternities and nine national sororities on campus. More than one third of the student body is Greek, including senior Bridgette Williams. She was this year's Homecoming Queen nominee for her sorority, Zeta Tau Alpha. Two years ago her sister was on homecoming court and 37 years ago, her mother was crowned Homecoming Queen for Sigma Sigma Sigma.

"I can't think of better footsteps that I would want to follow in," Williams said.

She likes how she and her mother have had a similar Elon experience.

She thinks her mother likes that, too.

The National Pan-Hellenic came to Elon in the late 1980s. They are traditionally African American fraternities and sororities.  There are currently six chapters on campus.

"It's one of those things that will always be with me no matter where I go I have a brother somewhere or NPHC sororities have sisters somewhere nationally, it doesn't matter where, you can always count on somebody to be there for you," Kyle Graham, President of National Pan-Hellenic Council said.

Fraternities are known for their philanthropic effort,s but the Kernodle Center located in Moseley is specifically devoted to service.

"It's the glue at Elon that helps us leave Elon and go out into the community and give to the greater good," sophomore Morgan O'Brien, the President of Habitat for Humanity, said.

Habitat for Humanity's celebrated its 25th anniversary on campus this year, making it Elon's oldest service organization. Habitat for Humanity falls under the umbrella of the Kernodle Center for Service Learning and Community Engagement.

"We're kind of in our own little world at Elon and being able to go outside of Elon into the Alamance community and work on things like this in neighborhoods that we wouldn't be seeing otherwise kind of opens everyone's eyes," O'Brien, said.

"I think what they learn through the Kernodle Center is not just about impacting others but how others impact us. A lot of students come away saying I received more than I gained I learned more than I expected to," Morrison said.

"It wasn't, 'hey, we believe in service let's have more people,' it was, 'there are so many needs in the community and we think we can do something about it, let's organize, let's coordinate and thus Elon volunteers and the success,'" Barnhill said.

Government on campus used to be a Men's Senate and a Women's Council. But it wasn't until 1945 when the two worked together under the name, Student Government Association.

Current SGA President Welsford Scott Bishopric said he is proud of how strong a voice SGA has on campus. But it took many years for SGA to develop that voice. Dean Jana Lynn Patterson is SGA's Advisor and she agreed.

"Our administration consults with SGA on every major initiative on campus now and 15 years ago that was not always the case," Patterson said.

In 1997 S-G-A debated over bringing the AIDS quilt to campus, which was a touchy subject at the time. Patterson thinks dealing with the issues are important for the growth of those who serve on SGA.

"It's going through those pieces that you struggle that I think make you come out a little stronger on the other end and I think they did as a group and I certainly know that many of them did as individuals," Patterson said.

More recently in the 2012 school year, SGA dealt with another controversial issue when some student organizations wanted Chick-Fil-A removed from Elon's campus when it was revealed the company donated to anti-LGBTQ groups. SGA lead the campus wide discussions on the topic.

But SGA has also passed legislation that was well received by most of campus. SGA is behind the library being open 24 hours during the week, and they pushed to have the new student center built.

"We've had good times and bad times but the one thing I've been proud to see is every time that we run into a bit of difficulty, just like the university does, SGA grows and rises to the challenge," Bishopric said.

Those are just some of Elon's student activities through the years. While the number of student organizations on campus continues to change, one thing that remains the same is the students passion to get involved in them.