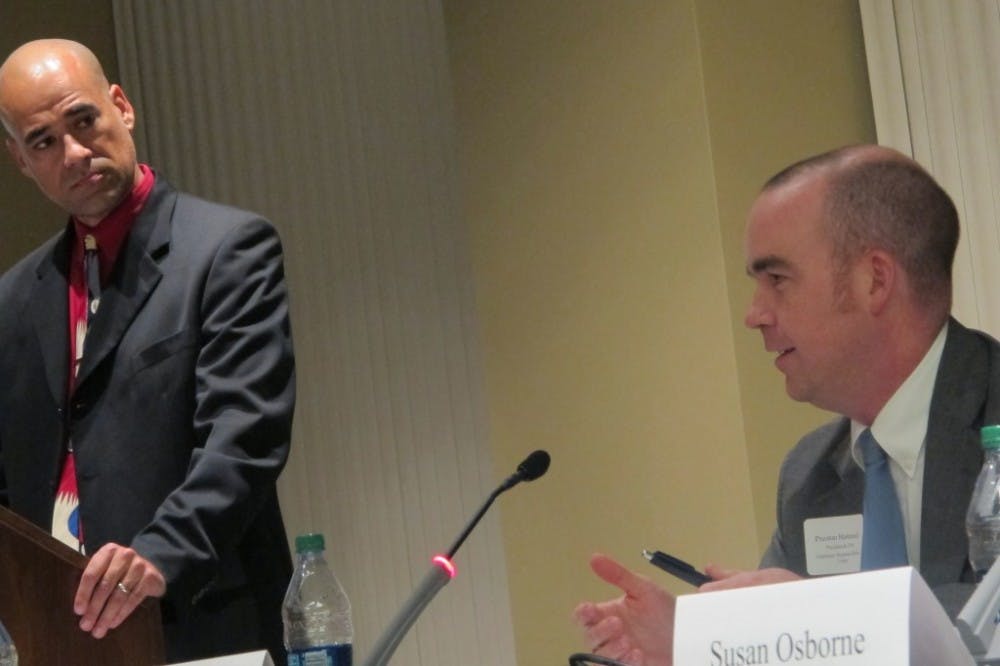 One rocky month into the implementation of the Affordable Care Act, a health care forum in McKinnon Hall found the issue far from settled on Monday.

Three invited professionals joined nine lay panelists from campus and the local community to expose the people behind the largely political debate. The panel was sponsored by a partnership between Elon University and the Burlington Times-News.

Each person left uninsured by the Affordable Care Act is an avoidable tragedy, according to Ginette Archinal, medical director of student health at Elon.

“My personal point of view about health care is that we have a moral responsibility to provide affordable, basic health care to everybody in society,” she said. “I find it morally reprehensible that so much of our society does not have access to basic health care.”

And now more than ever, these health care needs are increasing thanks in no small part to preventable lifestyle choices such as smoking, poor nutrition and lack of exercise, said Miles Grunvald, a first-year medical student at the University of Vermont and Class of 2013 alumnus.

“There will always be chronic diseases that will be costly to our country, but by encouraging preventative measures we can work to eliminate them,” he said.

According to the Center for Disease Control and Prevention, 65 percent of North Carolina adults are overweight and 28 percent are obese. Higher obesity rates are tied to greater need for health care, Grunvald said.

The less health care the average person requires, the reduced the strain is on a universal health care system, said Preston Hammock, president and COO of Alamance Regional Medical Center.

“The most expensive place to get care is the hospital. To fix this, we’ve got to keep people out of the hospital,” he said. “It is absolutely the right thing to do to have that patient live at home and contribute that much more to society.”

The debate now is less about whether people deserve basic access to health care, said Resa Walch, senior lecturer of health and human performance. The consensus is that people do, she said, but what defines basic access?

“It changes,” she said. “It’s a dynamic definition, and I’m not sure we can reach a conclusion on that.”

“We talk a lot about basic needs,” he said. “We don’t always probe into the definitions of what those words mean.”

“We all have mental health issues,” she said to laughter from the crowd. “I’m sure you can think of yours real quickly right now.”

Piedmont Health Services nurse Connie Bishop reminded the crowd that one in three residents of Alamance County will be affected by dementia or Alzheimer’s as a caregiver or sufferer of the disease. A person is diagnosed with Alzheimer’s every 60 seconds in the world, she said.

Bishop and her mother wore purple to the forum in honor of National Alzheimer’s Disease Awareness month this November.

“My mom here is 88,” Bishop said, waving to her mother in the crowd. “She just got her first Kindle today, and she’s not consuming a lot of Medicare. She’s pretty healthy. That’s rare.”

Joshua Moore, an alumnus of the University of North Carolina at Greensboro, said the mental health comments really resonated with him.

“It’s unfortunate, but a lot of times we as a society may not pay mental health the attention it deserves,” Moore said. “It’s a wonderful thing to take away from tonight, the value of preventative care and support for mental health.”

But while most support the ideas behind universal health care and providing basic care to all, funding it remains a different story.

“Is it fair that I, as a hard-working healthy taxpayer, have to front the bill to someone who can’t pay their own insurance?” asked senior Maria Restuccio.

But problems with universal health care may suggest a deeper mistrust of the U.S. political system, said senior Marissa Rurka.

Vice President of Burlington Metals Jeremy Troxler reminded the audience of the importance of the separation between church and state.

And to be realistic, Restuccio said, those who can’t afford even basic health care at Affordable Care Act levels shouldn’t expect the same level of care that those who can may take for granted.

“I don’t think that it’s financially realistic to say that everyone can enjoy the same access to health care that the average middle-class American enjoys,” Restuccio said.

“One of the panelists was making it seem too easy to implement,” she said. “It’s easy to say, ‘Yes, this is what we should be doing,’ but economically it’s usually more difficult. I don’t disagree with universal health care at all. I just think we need to be cautious, be smart in going about it.”

While the dust hasn’t settled on the healthcare debate, Greensboro resident Stan Mackay said programs like the panel could have helped iron out wrinkles earlier on in the implementation of the Affordable Care Act.

“To me it was very informative, very encouraging,” Mackay said. “There was such a broad range of ages, such diversity of discussion. If these talks had been held on a larger level before, a lot of the issues we’re now talking about would no longer be problems.”