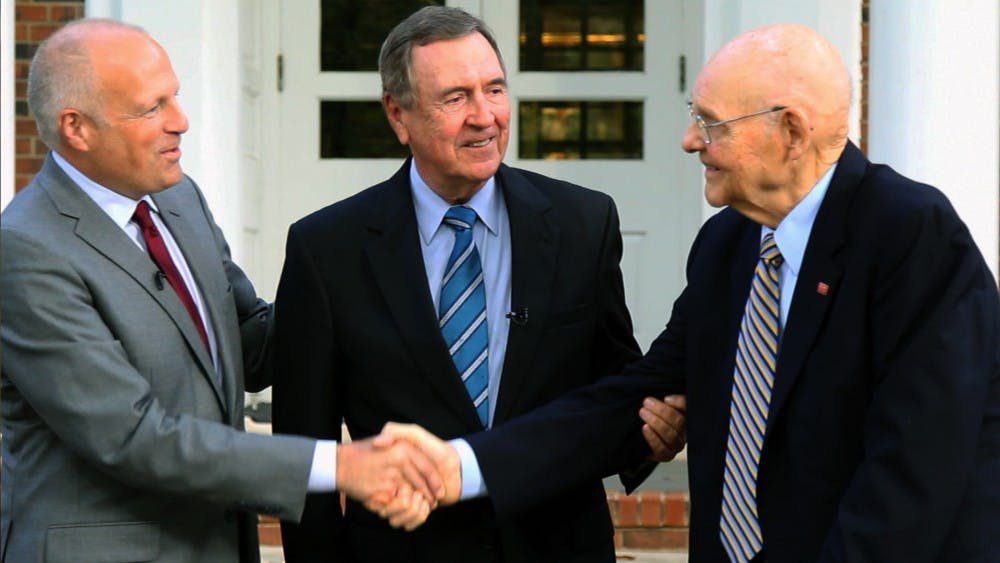 The reign of Elon's three living presidents over the brick pathways and oak trees of Elon lasts 56 years of the university's 125. And for the first time ever, all three of them gathered to be interviewed together, in the same room they lead the institution

It was on July 1, 1957 when Dr. Earl Danieley took over as president of Elon College. Dr. Danieley was a dean at the time and said he was not ready to be president.

"I was 32 years old, had no training, no experience and there it was. I was President of Elon College," Dr. Danieley said. "I knew pretty well how to do dean things but not presidential things."

The appointing of Dr. Danieley to the presidency even surprised his wife, Verona.

"I had substantial administrative experience so I wasn't really worried about the management but what completely eluded me as I look back now was the complexity and subtlety of a small historic institution like Elon," Dr. Fred Young said. "I don't think I knew enough to be overwhelmed.  I didn't understand the complexity of the organization."

Dr. Young remained as president for 25 years, one the longest serving presidents in Elon history. But when he retired in 1998, a selection committee chose a provost from the University of Wisconsin- La Crosse to secede him. His name is Dr. Leo Lambert and he is the currently the eighth president of Elon University.

"I feel like cathedral builders must have felt in the Middle Ages," Dr. Lambert said. "We are just part way through building the institution that will be bigger than yourself. That never gets old or dull."

One thing that all three presidents agreed on was being busy. Being president is not just addressing convocation and handing out diplomas.

"I think that students always assume that the president of the university is sitting in his office, here," Lambert said. "I  know I certainly spend much more time away doing things that need to be done for Elon in my fifteenth year than I did in my first year."

All three of the presidents played a major role into what the university is today.

"I think Elon is a place that spends a lot of time consulting and makes most important decisions in a collaborative and transparent kind of way," said Lambert.

Dr. Young knows firsthand. It was under his leadership, difficult decisions were handed down. Faced with low enrollment and average admission requirements, it was under his jurisdiction that tuition was raised 20 percent for three years in a row and increased the SAT requirements.

"Applications tripled, SATs went up, in other words it had a cumulitive effect," said Young.

And that is something Dr. Danieley wished he had done as president.

The tough decisions don't end there. Dr. Young decided against purchasing a school in bankruptcy in Hawaii and a hotel in London for the school. Dr. Danieley had to balance being a teacher and the president and Dr. Lambert wishes he took more time on key decisions.

"I think that leadership requires you to make tough decisions," Lambert said. "And sometimes you're going to make mistakes and I think you just have to own up to those and apologize for them when you do make them."

The story of Elon's growth is a remarkable one. So remarkable that George Keller wrote a book on it entitled "Transforming a College: The Story of a Little-Known College's Strategic Climb to National Distinction." In the book, Keller quotes a scholar calling Elon "a parochial bottom feeder," which Dr. Danieley aimed to change.

"As a high school senior, I hear snooty people in Burlington say, if you can't go to college, go to Elon," said Dr. Danieley. "And when I became president, I said I'd be darned if I didn't make them eat their words and nobody says it now."

Fast forward those 50 years and Elon is now completing its Global Village which is being constructed as a result of Elon's 10-year, $586 million strategic plan. But with new buildings going up, old buildings are coming down, something that President Lambert says isn't affecting the endowment.

"I don't think alumni give on the basis of  whether their old dorm exists or whether the senior oak is still alive," Dr. Lambert said. "I don't believe that for a second. I think it comes back to alumni believing in this institution as a place of human transformation, as a place where faculty and staff care about them deeply.

Endowment helps keep the cost of attending college down. College tuition and fees are increasing across the nation and Elon is no exception. The path to 2050 is a long and winding one that all three presidents' decisions help guide. But in the future, will an average middle class student be able to afford a degree from a private university such as Elon? Dr. Lambert recognizes the issue.

"I think the leadership of the institution, including the board, realizes that the issue that you've just put your finger on is a very important issue," Dr. Lambert said. "It means that we have to be just very judicious in terms of thinking about how we are going to use those additional resources that a more modest tuition increase brings to the university."

If all goes to plan, campus will look dramatically different in the next few years. A huge change from the former "parochial bottom feeder" which now looks to the future as one of the top ranked universities in the South. Dr. Lambert believes the university can only rise in its accreditation.

"I think Elon has a national brand and I think our national brand is going to keep getting stronger and more refined and better," says Dr. Lambert. "But, I am confident that we will have a bright future in 2050 and be doing even greater things."

"Satisfaction would have been my feeling then and my feeling now," Dr. Young said.

"I had a great sense of optimism," Dr. Danieley said. "I thought we were ready to go forward and boy, were we ready.

"I had a strong feeling of partnership with these two guys that you could not have asked for," Dr. Lambert said.

Dr. Young believes Elon has benefitted from all three presidents' hard work and dedication to the university.

"The greatest testimony to my work here at Elon is that Leo Lambert succeeded me," Dr. Young said. "In all seriousness, I'm not aware that I have ever said anything or had any reason to say anything negative about you (Lambert). But, it wouldn't matter. Elon is bigger than the three of us."

As the day comes to a close, Dr. Young and Dr. Lambert are reflective on how they have enriched each other's lives.

"I am grateful for what you have done. I admire it and they were asking me what I am most proud of at Elon," Dr. Young said. "Earl I may be most proud of you. I really mean that you've enriched the institution and our lives so much."