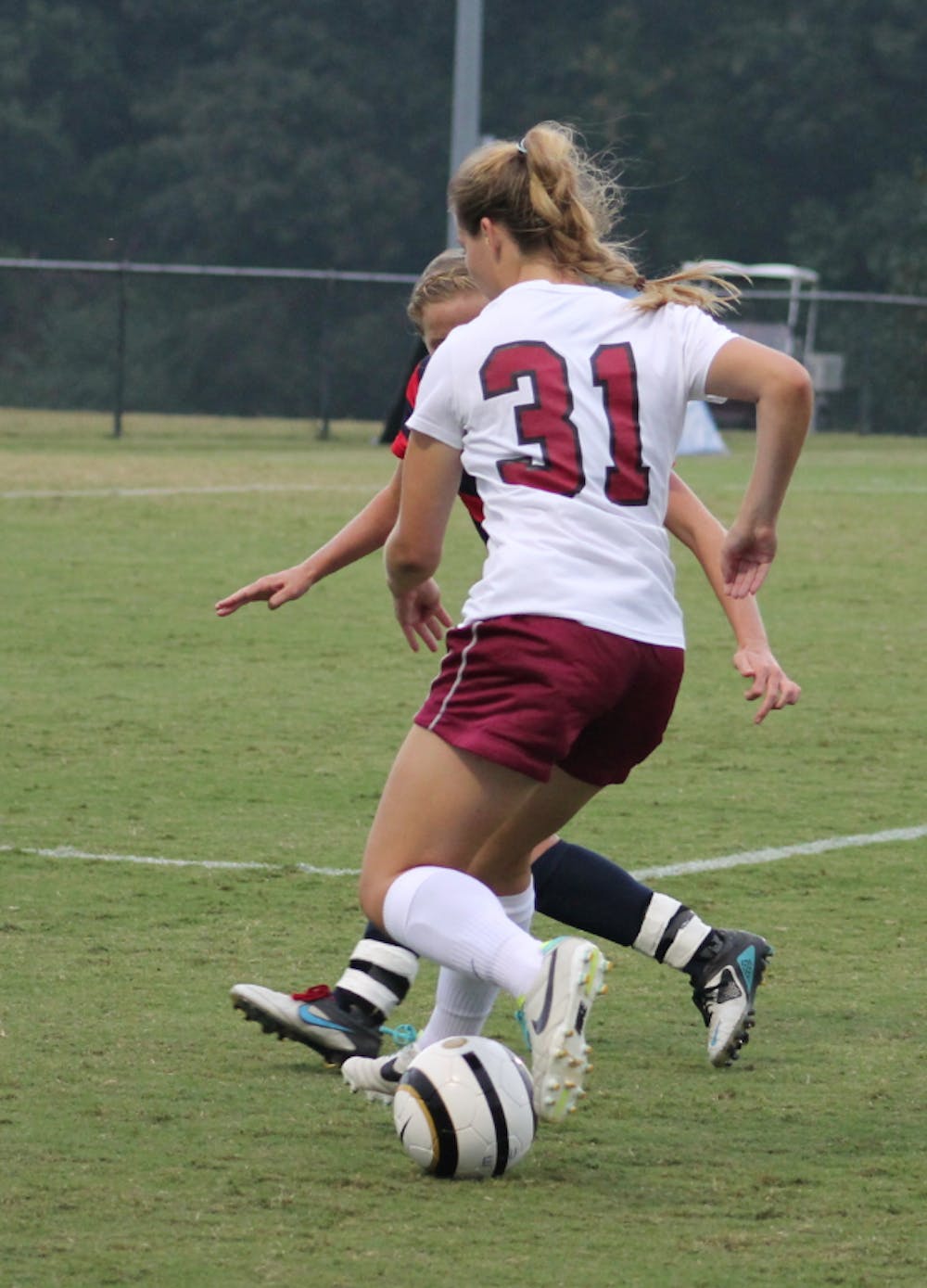 Jennifer McGorty was among the team's leading scorers this season having tallied eight goals on the year. (File photo by Ruth Gray)

The Colonial Athletic Association isn’t anything new for Elon University women’s soccer coach Chris Neal who was previously a coach at the University of North Carolina at Wilmington. For the rest of the team, it’s uncharted territory.

“I know the CAA like the back of my hand,” Neal said. “I’m used to that grind going to the Northeast to Hofstra [University], Drexel [University], [University of] Delaware and Towson [University]. I did it for eight years. I’ve got that experience, which ultimately I think will help our team."

After falling in the Southern Conference  Tournament finals to Furman University Nov. 10, the women’s soccer team became the first Elon athletic program to set its eyes on the new conference. All Elon athletic programs are competing in the SoCon this academic year before transitioning to the CAA prior to the 2014-2015 academic year. The move was announced in May by Leo Lambert, Elon’s president, and Dave Blank, the school’s athletic director.

Instead of traveling to the likes of Birmingham, Ala., or Statesboro, Ga., Elon will now head for the colder air against teams like Northeastern University, located in Boston, and Hofstra University in Hempstead, N.Y.

“The weather will be a big difference. It will be a little colder in early October even,” Neal said. “But we have a lot of kids from the Northeast that are used to it. They’ve been living the high life down here in the 70s during the season. Who knows how much of a factor it will be? For College of Charleston, it was a factor this year.”

As the College of Charleston, a former SoCon member that made the transition this summer to the CAA, saw, the going was quite different as the weather got colder and the Cougars went north.

“Colonial is a different style of play and different teams are going to play with different tactics,” said senior forward Jennifer McGorty. “I’m kind of excited for Elon to go into the CAA. You look at teams like Charleston and they’ve been a great opponent for us in the past. You see their record, but I don’t think it’s any reflection on how we’re going to do in it. We did great in our preseason playing those other teams.”

While Elon enters the CAA on a better note having gone 13-3-6 this season and reaching the SoCon Tournament championship match, Neal said there are a few factors that will play into Elon’s success in 2014.

“It goes without saying it’s a tougher league,” Neal said. “We have to get better. We’re going to let the kids enjoy the season they just had and the body of work they put in for the next week. After Thanksgiving, we’re going to get back in the weight room. As soon as January gets here, we’ll be right back on the field. That’s how we’re going to counter it. We can’t get complacent. We have to make sure our team gets better.”

Scoring will also be a big factor for Elon to replace. Though sophomore forward Nicole Dennion scored 15 goals this season and won SoCon Player of the Year, 27 of the team’s 56 goals were scored by graduating seniors.

In order to succeed in the challenging new conference, other members of the team, as well as any of the 10 incoming freshmen, will have to step up to help Dennion on the scoring front.

“McGorty had eight. [Senior forward Catherine] Brinkman had seven. [Senior forward] Kendall [Stanley] had four. [Senior forward] Chelsey [Stark] had three. With this senior class, we lose 27 goals,” Neal said. “Other kids are going to get a chance on the team. Whether or not we can manufacture goals next year like we did this year, I guess we’ll have to wait and see.”

While Elon did not match up against any CAA teams during the regular season, the Phoenix took on UNCW in a preseason exhibition and battled the Seahawks to a 1-1 draw.

“We didn’t really know who we were as a team at that point in our exhibition with UNCW and we tied them,” Neal said. “UNCW finished tied for fourth in the Colonial, so there are benchmarks we can look at, but it’s not going to be easy.”

The depth of the conference is a draw for the Phoenix because of the NCAA Tournament possibilities. With 327 women’s soccer programs, the chances of an at-large bid for teams not winning their conference tournament grows significantly. In the Southern Conference’s history, one team has earned an at-large bid. Year after year, though, the CAA can send multiple teams to the NCAA Tournament because of the strength of the conference.

“You literally can beat everybody on that schedule,” Neal said. “But literally everybody can beat you. There are a couple games in the Southern Conference, or at least one game every year, that you just get on top of early on for whatever reason and it just goes your way and you can rest people. You just don’t have that game in the Colonial. Every game is going to be nail-biting, one- or two-goal decisions. If we thought the Southern Conference was a grind, the Colonial is going to be even worse. And it’s going to be colder.”