Elon has no answers, No. 1 UCLA rolls in NCAA Tournament 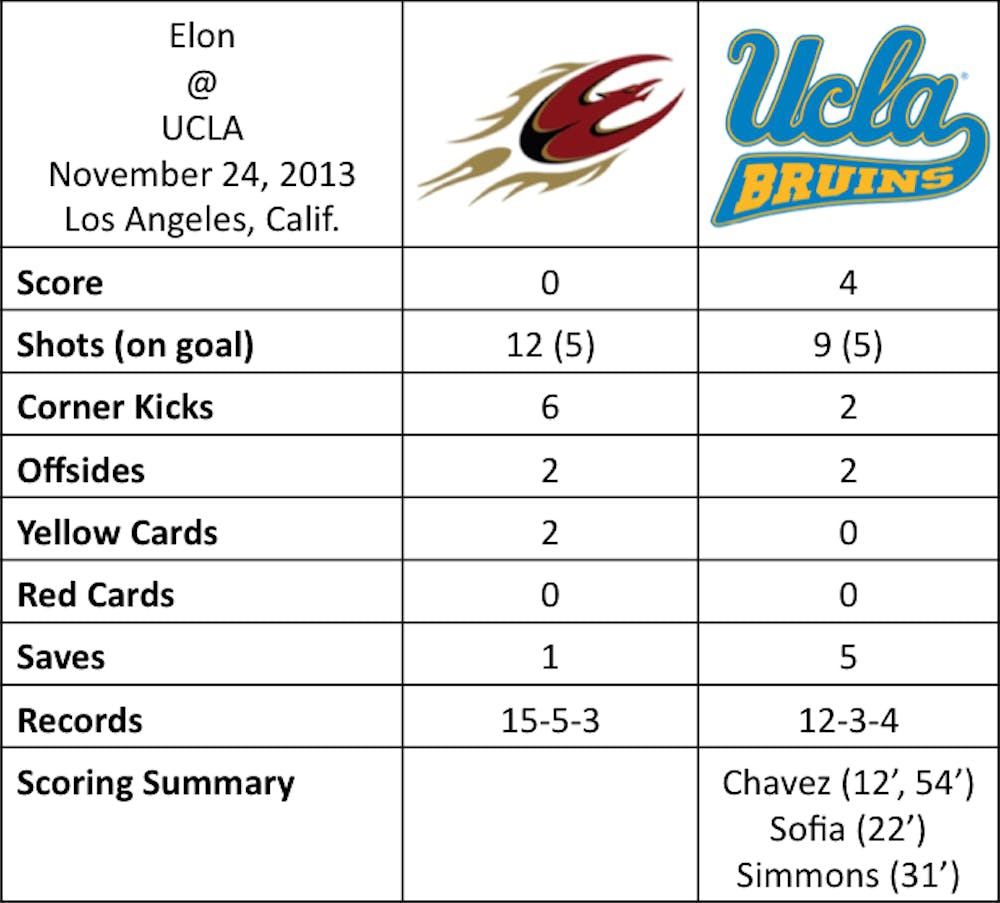 LOS ANGELES — Clinical. There’s no other word to describe the UCLA men’s soccer team in the second round of the NCAA Tournament against Elon University.

The Phoenix outshot the Bruins 12-9 in the contest, but UCLA capitalized on its chances where Elon did not, leading to the 4-0 victory for the Bruins at home in Drake Stadium in Los Angeles Sunday, Nov. 24.

“They were clinical in front of goal. They took their chances and finished well,” said Elon head coach Darren Powell. “I’ll go review some of the video just to see exactly what happened but they buried them. The fourth goal was very good. They just took their chances well and when you play good teams, good oppositions, that’ the name of the game.

UCLA, the No. 1 team in the tournament after finishing the season as the Pac-12 runner up to the University of Washington — the No. 2 seed in the tournament — jumped early and often on the Phoenix, scoring three goals in 31 minutes to open the match.

In the 12th minute, UCLA found the back of the net courtesy of senior forward Victor Chavez. A cross was played into the box from the left side of the penalty area and squirted through the goal mouth before finding sophomore midfielder Grady Howe on the other side of the box. Howe sent it back through the box and the ball found Chavez all alone near the left post for the goal.

“We really knew we had some strong outside wingers and from scouting and watching the Clemson game for Elon a few days ago, we thought we could really expose the wings and get some goals on crosses,” said senior defender Joe Sofia. “Our coaches did a good job preparing us before the game and we tried to execute it moving the ball out wide and being patient.”

The second and third goals also came via crosses of sorts, with the second goal coming on a corner kick that sailed long over the face of goal but found a wide-open Sofia on the back post. Sofia had loads of time to line up the bounding ball and put home a rocket of a shot in the top-right corner of goal in the 21st minute.

The Bruins’ third goal came in the 31st minute when junior defender Aaron Simmons headed home a free kick from 25 yards out to give the Bruins a 3-0 halftime lead.

As in games past, Elon came out strong to start the second half. Similar to its first round NCAA Tournament matchup when Elon scored in the 58th minute against Clemson University Thursday, Nov. 21, Elon dominated the first 15 minutes of the second half. The difference on this occasion was the Phoenix could not capitalize on the momentum.

Unlike Clemson, though, UCLA knew Elon was going to come out of the locker room with a high-energy, fast-paced aggression.

“Coming in, we knew Elon was going to come with everything starting the second half, and they did,” Chavez said. “They came out full force, 100 percent trying to do what they do best. We were able to contain them. We knew they were going to come out hard with a lot of heart and we contained that. They played great those first 15 minutes of the second half. They were killing us.”

Against the run of play in the 54th minute, Chavez again got loose in front of goal and converted on a diving header behind Elon junior goalkeeper Nathan Dean for his second of the night and the fourth goal for the Bruins.

“Watching Elon against Clemson, I thought us being able to change the point of attack was going to be something we could exploit them on in our final 1/3,” said UCLA head coach Jorge Salcedo. “Our guys did a great job of changing the point of attack and moving the ball side to side. Obviously the first goal comes from that scenario. We’re a team that Elon maybe hasn’t faced in terms of the type of technique and the technical ability we have, so we really concentrated on moving the ball side to side against them.”

Edwards Jr. stopped all five shots the Phoenix put on goal in the match while Dean was forced to make one save. Elon also took six corner kicks in the contest to UCLA’s two.

“We had a game plan just as any other game and we knew we’ve faced programs and teams with this type of talent that are very good at certain things and we wanted to take that away from them,” said senior midfielder Daniel Lovitz. “We did a decent job but not good enough in the first half and we dug ourselves a hole and gave up a couple soft goals and against a team like that, it’s very difficult to come back. Even then, we kept fighting and pushing and had half chances here and there. Just weren’t able to convert in the right moments of the game to give us a little bit of momentum, which is huge in comebacks.”

With the loss, Elon drops to 15-5-3 while UCLA moves to 12-3-4. Elon graduates five seniors from the team, including Lovitz, midfielders Charles Howard and Matt Wescoe and defenders Nick Butterly and Mark Berlin. Overall, the 47 wins for the five seniors makes them the winningest class in program history.

—Timeline: The crazy 73 hours between games for the Phoenix