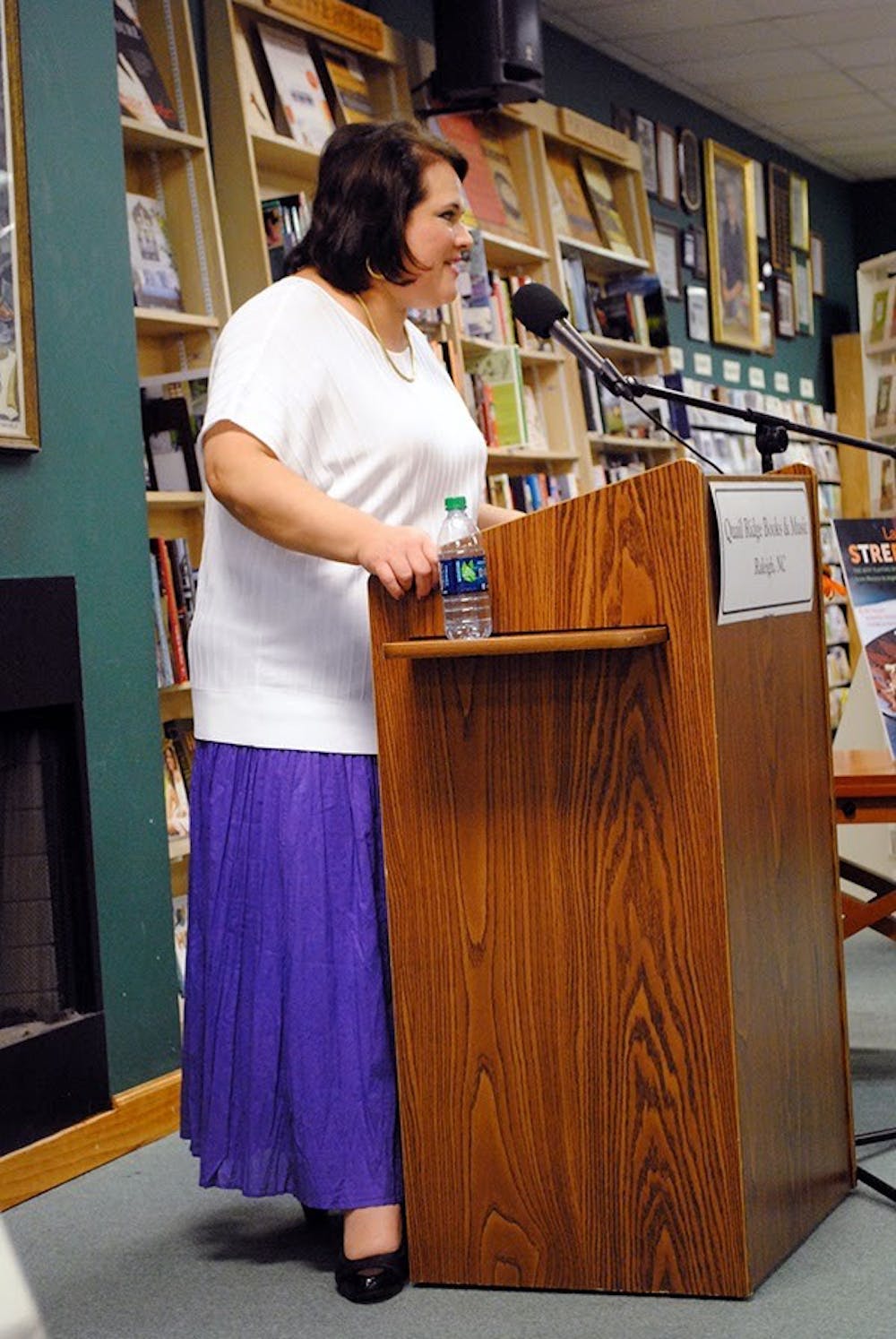 In fact, the type of enchilada Americans chow down on is very different from a Guatemalan enchilada, which is actually a tostada topped with peas, cabbage and a vibrant beet slaw. And those beloved hard shell tacos? You won’t find those in any city in Mexico, according to Donna Van Bodegraven, associate professor of Spanish at Elon University and long-time homeowner in Yucatan, Mexico.

The misconception that the food Americans find in Tex-Mex restaurants is indicative of all Latin American cuisine is just one of the stereotypes surrounding Latin American food that Gutierrez, who grew up in Guatemala City, aims to dismiss with her new book. In addition, her book highlights the diversity of flavors and dishes within Latin America.

“The food of Latin America is very different — it cannot all be boxed together,” Gutierrez told an audience of family, friends and colleagues at the cookbook’s launch event Sept. 3. “We do not all eat Mexican food, and Mexican food … it’s only what I call the doorway into the home that represents all Latin American cuisines. Once you walk into the door, you find that you have 20 other rooms in the house, each of them just as special and worth trying and discovering.”

While Americans may feel comfortable cooking a cheese quesadilla, many find the task of frying a churro a bit more daunting. Gutierrez hopes to eradicate this intimidation with her cookbook.

“In my opinion, there is no food that is less intimidating, more casual, more fun than street food,” she said.

Vanessa Bravo, assistant professor of communications at Elon University, who spent 14 years as a journalist and editor at a newspaper in Costa Rica, sees Gutierrez’s decision to include Mexican food in the cookbook as a smart way to accomplish the spread of authentic Latin American cuisine.

“The Mexican cuisine is very good, [and] there are dishes that are pretty simple to prepare, so it’s probably a good way to make people feel more confident and then try to go into more exotic dishes,” she said.

“I would say most Americans think of Mexican food as spicy, [but] the typical cuisine in the Yucatan is not spicy,” Van Bodegraven said. “There’s a particular chili pepper, the habanero chili pepper, [that] they will chop up and mix with a little vinegar and put on the side if you want to spice things up. But typically, the food itself from the region is not spicy.”

And just as dishes can take on very different forms from one country to the next, food terms can take on different meanings within the various parts of Latin America.

“In Latin America we may all speak Spanish, but it doesn’t all mean the same thing when we say it,” Gutierrez said. “Argentinians don’t eat tacos. ‘Tacos’ for them mean the little heel in their shoe. Just like if you ask for a fajita in Chile, and [the waitress is] a pretty woman, and you’re a man asking for a fajita, you’ll probably get slapped because it means ‘girdle.’”

The birth of a cookbook

It’s a lack of first-hand encounters with the food itself, perhaps, that gives birth to these stereotypes. Gutierrez said she believes there is an absence of authentic Latin American street food in America — a visit with other food writers to a food truck park in Portland, Ore. opened her eyes to this void. As they sat around the table enjoying food from Vietnam, Thailand, Spain, Yugoslavia and Poland, Gutierrez noticed there was something missing from the table: a plate of Latin American food.

Eight weeks later, the proposal for a book on Latin American street food was sold. The theme, Gutierrez explained, was ripe for the taking. Freelance food writer Jill Warren Lucas agreed now is the time for Americans to begin opening themselves up to Latin American flavors.

“I think most people will come to the book with a very open mind, and very open eyes and a very open palette,” she said. “When you look at what’s happening not only in North Carolina, but nationally, Latino communities are growing so much … and they are bringing their food cultures with them.”

“Young people think it’s the coolest thing in the world, and they track down [trucks] using their Twitter account, and some older people are still reluctant,” she said. “They may go for the cupcake truck, but they won’t go find the taco truck.”

The book, which launched at Quail Ridge Books & Music in Raleigh, consists of 150 recipes from 20 different countries. It is divided into chapter by theme, and while there are chapters focused on tortillas, soups, sandwiches, fried food, empanadas and tamales, the longest chapter in the book is dedicated to toppings.

“[Toppings] make you a participant in the dish you’re going to eat,” Gutierrez said. “What you put in your taco is going to be different than what I put in my taco. You become part of the cooking equation just by what you put on your food.”

Gutierrez is no stranger to making home cooking part of the experience — as a cooking instructor in both Chapel Hill and Cary, she is constantly teaching her participants about flavor and technique, through both hands-on demonstrations and personal stories. She also has another successful cookbook, “The New Southern-Latino Table,” and is the former food columnist for The Cary News. These experiences bring to her book both a voice of expertise and a welcoming quality, which gives readers more confidence when tackling the recipes, said food writer Warren Lucas.

“She has a tone that’s very encouraging, and I appreciate that as a home cook,” she said. “It’s very accessible food, and I think it’s a really exciting book because I love things like a ceviche, but I don’t feel especially confident whipping one up and serving raw fish to people, and now I have a recipe I can really trust.”

While street food in America is a relatively new phenomenon and is often seen as festival food or rodeo fare, it is very much a way of life in many Latin American countries, Gutierrez said.

There’s been documentation of street food in Latin America since the 1600s, and it, too, was relegated to festivals and special activity until the 1970s, when more and more people joined the workforce and traffic became extremely congested. The subsequent gas shortages made it so buses that took children home for lunch and back to school in the afternoon could no longer make this midday trip.

“Schools and universities had no places to serve food from — there were no cafeterias in schools back then,” Gutierrez said. “You either took your lunch box and stayed the whole day until 6:00, or there had to be an option, and street food vendors filled that niche.”

And while the service was quick, these street vendors weren’t selling “fastfood.” These food vendors made it their responsibility to serve home-cooked meals in the street, so that kids could find a sandwich similar to the one their mothers made back home. They attracted their customers not with plastic toys or giveaways, but with flavor and authentic dishes.

“You would walk an extra half a mile to get to that specific sope stand or pupusa stand or ceviche stand that had the food you liked or that reminded you more of home,” Gutierrez said. “You started meeting the people who used to conglomerate around that same [stand] … The importance of street food in Latin America is not just eating to eat, it is more than that. It is community.”

Between these stories, photographs of Latin American streets, extensive research and authentic recipes, Gutierrez said she hopes her book will bring readers into this community and invite others to share in it as well.

“This is meant to be a communal meal,” she said. “And that you’re happy every time you make it.”