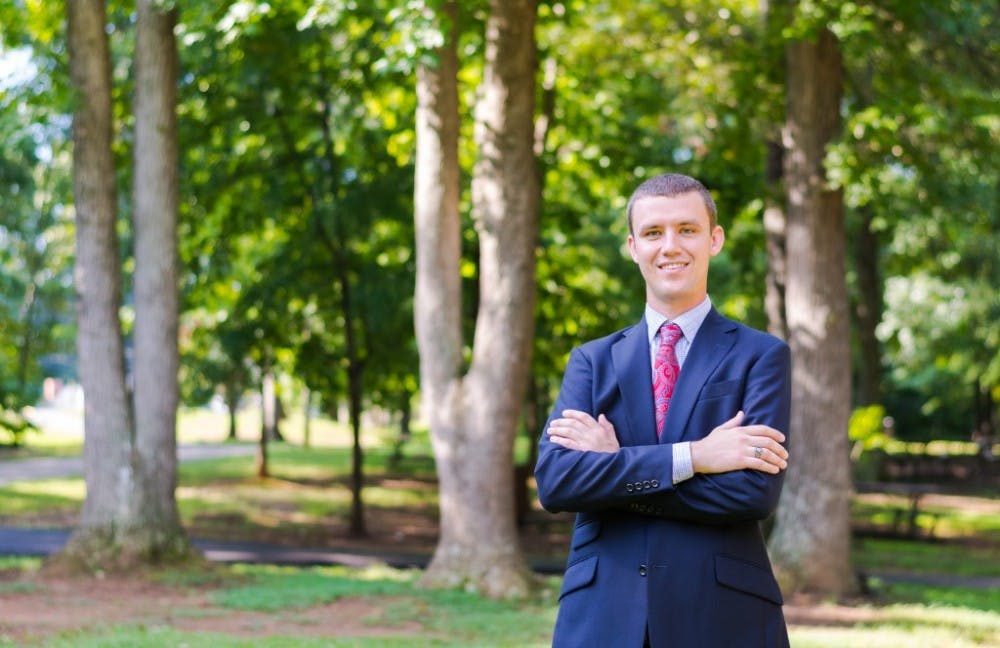 Even with his entrepreneurial and political pursuits, Baltutis still finds time to travel and walk his golden retrievers. Photo courtesy of Ian Baltutis.

Ronnie Wall was first elected mayor of Burlington in 2007. Since being re-elected in 2009, he has run unopposed, according to the Burlington Times-News.

This year, that statistic is about to change.

Despite only having lived in Burlington for eight years, Baltutis, a Minnesota native, has quickly gained recognition throughout the area.

“I haven’t done a whole lot in politics, and that is a strike against me, but I think that is a breath of fresh air,” Baltutis said.

Baltutis has played an active role in the Burlington community since arriving at Elon in 2005, but who exactly is this newcomer to Burlington politics, and why is he running for office?

From garage hand to entrepreneur

Baltutis began his entrepreneurial career in high school by working closely with the owner of a local garage.

“He had started the company from scratch and was very supportive in letting me work hands-on and learn all aspects of the business,” Baltutis said. “That got me really interested in entrepreneurship and having my own company someday.”

“During that time I decided I was more interested in business,” Baltutis said.

Halfway through his sophomore year, he transferred to Elon, where he majored in business administration with a concentration in entrepreneurship.

During his senior year, along with R.J. Yozwiak ’08, Baltutis formed his company The Vibration Solution, LLC., which manufactures vibration isolation products that silence noisy household appliances like washing machines.

“[Baltutis] was the best entrepreneurship student I have ever had,” said Barth Strempek, associate professor of entrepreneurship at Elon. “His analytical abilities, his maturity and everything was top-notch. He was way beyond his years.”

Throughout the past three years as co-owner, Baltutis has helped guide the company to 300 percent growth, according to Elon’s Office of Alumni Engagement.

“He was working full time at Home Depot and then at the Honda plant in Mebane,” Strempek said. “He quickly got to a level where he was funding his own education. It’s an unbelievable thing he did.”

After graduating in 2008, Baltutis remained in Burlington to work at Honda Power Equipment in Swepsonville, N.C., while also continuing to run his company.

“I was working around 100-plus hours a week between my day job and getting my company going,” Baltutis said.

While at Honda, Baltutis implemented manufacturing technologies that have helped save the plant multiple millions of dollars, according to the Office of Alumni Engagement.

He is also co-founder and member of the Board of Directors of Burlington Beer Works, which will be the third co-op model brewpub in the nation when it opens. It is set to be located in downtown Burlington.

He also founded the East of Elon Home Brewing Cooperative in Alamance County in 2009 and has since helped more than 100 people learn how to homebrew, according to Burlington Beer Works.

Two years ago, Baltutis began thinking about running for city council. When election nominations came up this past summer, Baltutis instead decided to challenge Wall for the position of mayor.

“Politics is supposed to be a discussion,” he said. “When you have an uncontested seat, especially at the mayoral level, politics is almost doing a disservice to the community.”

In a letter to the Burlington Times-News, Claude Lumpkin, adjunct instructor of business at Elon, said, “[Baltutis] has demonstrated excellent leadership and management skills which make him a more than worthy challenger.”

Lumpkin also said Baltutis deserves consideration because “he represents a positive alternative to ‘politics as usual.’”

This so-called alternative approach has Baltutis walking door-to-door and interacting with voters face-to-face.

“‘Politics as usual’ has been a lot of wealthy white men spending a lot of money on yard signs and getting elected,” Baltutis said. “It’s not somebody knocking on your door and asking you what the issues are.”

Throughout his campaign, Baltutis has strived to surprise voters by showing up to events where people would not expect to encounter a candidate.

“My goal is to accidentally run into our voters and make them aware that politicians are members of the community, too,” Baltutis said. “Politics in our country was founded in bars and living rooms, and that’s where it needs to continue to happen.”

Given his background, Baltutis approaches politics through an entrepreneurial lens.

“A lot of people are turned off by politics because they see it as a big argument, but if you look at it like a business that serves the voters, I think you can have fun with it while also making sure it serves its purpose,” Baltutis said.

His primary goal is to revitalize downtown Burlington and make the area a place where people desire to live.

Furthermore, “the biggest new companies in our area in the last couple of years have brought in under 1,000 jobs, which is why we have been stuck at 9.5 percent unemployment rate for years,” Baltutis said.

Baltutis’ plan to pull Burlington from arguably the worst economic point in its history focuses primarily on the idea of investing in the community.

“When we invest in the neighborhood, we encourage people to live here and we encourage businesses to develop here,” Baltutis said. “In turn that business pays taxes, hires employees and gives back to the city.”

The Burlington Beer Works brewpub is part of this plan. He said he hopes the restaurant will begin the process of revitalizing downtown by bringing in entertainment, shopping and nightlife and encouraging new businesses to set up shop.

“What I bring to the table is this business understanding and a modern perspective,” he said. “We are being led by a city council and a mayor who are 50-plus years old, and their business experience is decades old. We are a city on the precipice of opportunity and we need to be ready to take advantage of that.”

Although much of Baltutis’ focus is on increasing local business commerce, he said he has his eyes set on a full spectrum of issues.

One such issue, he said, is the city’s “big, massive, over-engineered transportation plan,” which he said no one has taken action on because it is so expensive.

He said he also hopes to invest in sidewalks and bike paths so if people choose these modes of transportation, they will have safe routes.

Baltutis’ transportation plans will require money from the community, and with Wall promising not to raise taxes, support for these investments may be challenging to cultivate.

“Yes, Ronnie has not raised taxes, but fees for city services have gone up significantly,” Baltutis said. “He has kind of shifted where we are spending the money.”

Since Wall took office, water rates have increased by 5 percent and sewer rates by 14 percent, according to the UNC Environmental Finance Center.

It’s all about looking at the community as an investment, Baltutis said.

“If you put a sidewalk in and the sidewalk is well-positioned to help serve businesses, then yes, you are spending x amount on a sidewalk, but you also open up business opportunities and you create commerce that then feeds back into the city through property and sales taxes,” he said.

Another issue at the forefront of Baltutis’ mind is the fact that it is currently illegal to own chickens or maintain a garden within Burlington.

Although there is a valid argument against noisy roosters, Baltutis said, well-managed chickens could be an asset to the community as a source of food and a means of disposing of food stamps.

“It’s simple things like this,” Baltutis said. “What is the city saying to people who want to try and make something? They are saying no; they are shutting the door on new ideas. What I want the city government to become is a partner in progress.”

With Baltutis’ busy schedule and long list of commitments, many wonder if the Elon alumnus ever has time to rest.

“A lot of people wonder if I actually sleep at night simply because I always seem to be doing something, but everything I do is something I enjoy," Baltutis said. "I do occasionally find time to relax, though.”

He said he enjoys spending time in his garage working on new inventions and his 1974 MG.

He has two golden retrievers that he walks every morning, and he and his fiancee travel often. He has been to 49 of the 50 states and plans on traveling to the last, Alaska, this summer.

“At the end of the day, the biggest thing about me is that I am passionate and I am involved,” Baltutis said. “I wake up in the morning ready to go and excited about the day.”

Traditionally, in off-year elections, about 2,800 of the 36,000 eligible voters in Burlington show up to the polls.

This year he said he hopes to see more young people from the community come out and vote, along with those who have been disenfranchised.

“One vote really goes a long way,” Baltutis said. “We need 1,401 votes to win, so if you bring one or two friends to the polls with you, you have really made a huge difference.”

“This is a big deal,” Baltutis said. “This is Burlington’s future we are voting on.”