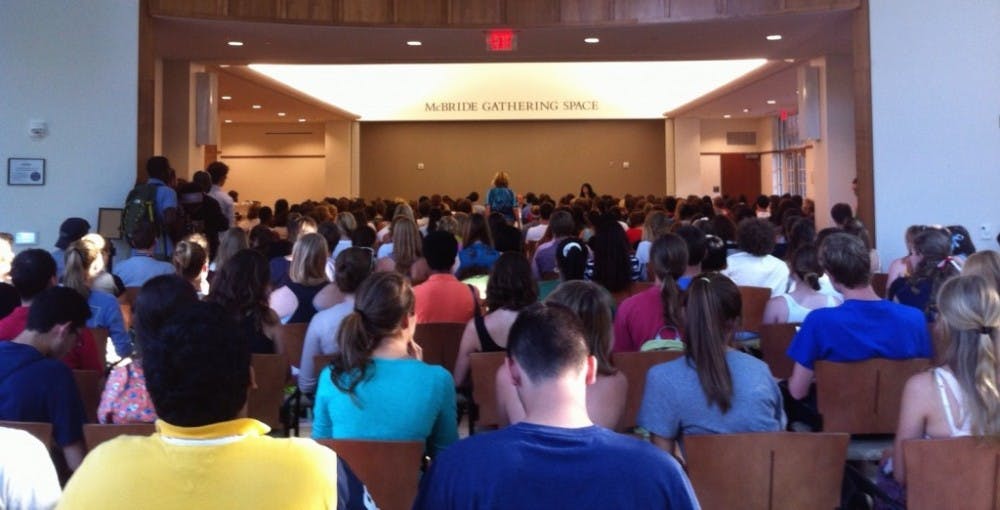 A panel of experts came together Sept. 11 at Elon University to discuss the alleged use of chemicals weapons ordered by Syrian President Bashar Assad and what the United States, and the world, should do about the ongoing conflict there.

Haya Ajjan, a native Syrian on the "Crisis in Syria: Prospects and Perspectives" panel said she lived in fear all her life in Syria. The assistant professor of management information systems worries each day for the safety of her friends and family still living in the region under Assad’s control. More so, she said her family thinks the world is content to watch the conflict unfold.

“My family said the world doesn’t care about us,” Ajjan said. “It’s like we belong to a different race, like we’re not human. They don’t care.”

Moral implications aside, Sarah Salwen, assistant professor of political science said, there are international legal justifications for U.S. involvement in Syria, mainly the Responsibility to Protect (R2P) norm. Created at the United Nations Summit in 2005, the doctrine states that if a government in power is unable or unwilling to protect the safety of its own people, the international community is responsible for stepping in and protecting them.

“The legal status of the Responsibility to Protect remains contested, but it does provide a framework,” Salwen said.

[quote]My family said the world doesn’t care about us. It’s like we belong to a different race, like we’re not human. They don’t care.” - Haya Ajjan, a native Syrian and assistant professor at Elon[/quote]

Assad breaking the Geneva Convention of 1925, which prohibited the use of chemical weapons, is a stronger legal argument for U.S. intervention, Salwen said. But the United States still lacks U.N. support for intervention, which Salwen said is critical to gather international support.

“Punishment is required when individuals break the law, punishment that is both retaliatory and appropriate,” Salwen said. “But the problem with this argument is that a unilateral U.S. military intervention would also appear to violate international law, because it would not have the backing of the U.N. Security Council.”

With or without international punishment, Syria must come to an internal peace once the civil war has subsided, said Stephen Gent, associate professor of political science at the University of North Carolina at Chapel Hill.

And U.S. intervention might actually prolong the conflict, Gent added.

“Intervention could actually embolden the rebels and increase the length of the conflict,” he said.

Salwen said the American people are weary of war, given the conflicts in Iraq and Afghanistan that have together lasted more than a decade, though another war may be necessary for stability in Syria.

“What’s required to protect the citizens in Syria would be a full scale toppling of the regime,” Salwen said. “It would seem to involve the U.S. in another major conflict, many boots on the ground, like the war in Iraq all over again.”

There is still hope for diplomacy, of a peaceful solution without further bloodshed, as Russian Prime Minister Sergey Lavrov suggested in his Syrian disarmament plan.  It would keep Syrian’s chemical weapons, which the government has for the first time admitted to possessing, under international control.

But a native Syrian and member of the audience, Muhammad Arida, said he doesn’t think it’ll make much of a difference for his people, who are getting “murdered by their own government every day.”

To silence comparisons of intervention in Syria to Iraq in 2003, Bojan Savic, assistant professor of political science, pointed out that the European front has been mostly quiet on Syria. He said European countries have also criticized NATO less on Syria than they did on Iraq, though NATO has so far taken a less definitive stand.

“There hasn’t been an open, overt challenge to the U.S. by Europeans on Syria,” Savic said. “Before the G20 summit, Europe was virtually absent on international debates on how to respond to the Syrian violence and use of chemical weapons.”

But the conflict isn’t between Syria and the United States or Europe, said Safia Swimelar, associate professor of political science at Elon. It’s between Syria and Syria, in a vicious civil war that has killed an estimated 110,000 people, created two million refugees and displaced four million Syrians internally.

There is a sectarian element in the conflict, Swimelar said, given that Assad’s regime is of the Alawite sect of Islam, a minority in much of Syria.

For the millions of Syrians who are Shiite or Sunni, without Assad’s protection, there are few attractive options. Al-Qaida is one of them.

“If the Syrian government take you and your family and start massacring you, and killing your women and children, and no one comes to help you, then I think I would become an extremist, too,”Arida said.

This event was sponsored by the Peace and Conflict Studies program, as well as the Political Science and Policy Studies, International Studies and Middle Eastern Studies programs.