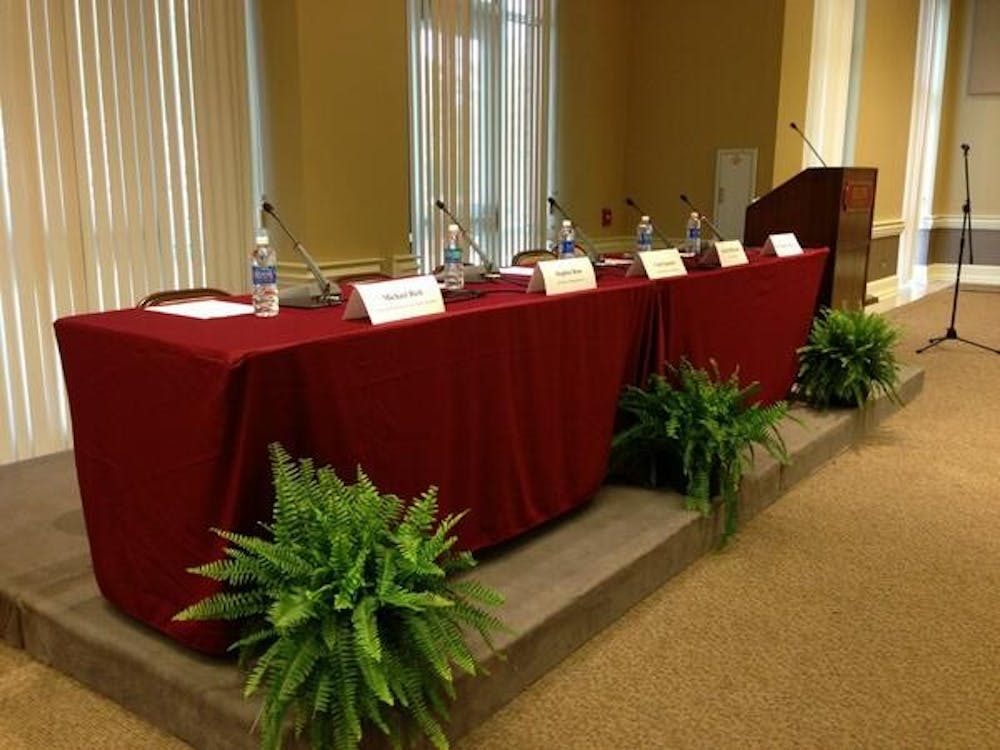 Elon University held a debate May 1 regarding gun violence in the United States. Photo courtesy of Tony Crider.

Members of the Elon and Burlington communities gathered May 1 to discuss issues, tensions and laws surrounding gun violence in the United States.

The evening began with opening statements and concerns from community panelists, which consisted of Elon professors and students alike.

“Taking a gun away from a person won’t make them any less violent,” said freshman Samantha Allen. “We have to look at where these violent acts come from.”

Other students raised concerns about the American population’s senses being dulled to the reality of violent acts due to graphic video games, movies and television programs, while some said they believed there was no correlation between the number of guns in the United States and the number of people who commit gun crimes.

“Opinions of the public are formed by emotions after violent events instead of facts,” said freshman Zoe Heiberg. “People committing violent acts didn’t care about the law when they committed these acts, therefore, stricter laws wouldn’t prevent violent acts from happening.”

Before transitioning to the expert panelists, Jason Springer, assistant director of academic advising, said he felt gun rights were a civil rights issue.

“If the national conversation is only about gun control, we have failed,” Springer said.

Cliff Parker, chief of the Town of Elon police, was one of the first expert panelists to speak after the community panelists.

“While I realize there are tensions on both sides, I find that when we come together to talk about issues like this we often find that we aren’t that far apart on what we want to happen," Parker said.

Stephen Ross, a member of the North Carolina House of Representatives, reminded those present that violence in the United States comes from more than guns.

"I don’t think you can pin the violence going on in the United States on any one thing,” Ross said. “I think it stems from a multitude of things.”

As the last expert panelist to speak, Michael Rich, associate professor of law at Elon, reminded community members of the reasoning behind the second amendment and how its structure is being implemented today.

According to Rich, after specializing in criminal law, he said the Supreme Court of the United States deems it necessary for citizens to own handguns because handguns are necessary for self-defense.

“The second amendment seems to leave open some room for substantial regulation,” Rich said. “So long as it doesn’t infringe on your ability to defend yourself, the government is allowed to regulate gun laws.”

The Rev. Richard McBride, chaplain emeritus of Elon, reminded the audience before the floor was opened for questions that no solution is perfect, but something should be done nonetheless.

“None of the solutions presented for gun violence are perfect solutions,” McBride said. “But if they provide a way to decrease harm done to other human beings, why wouldn’t we embrace it?”