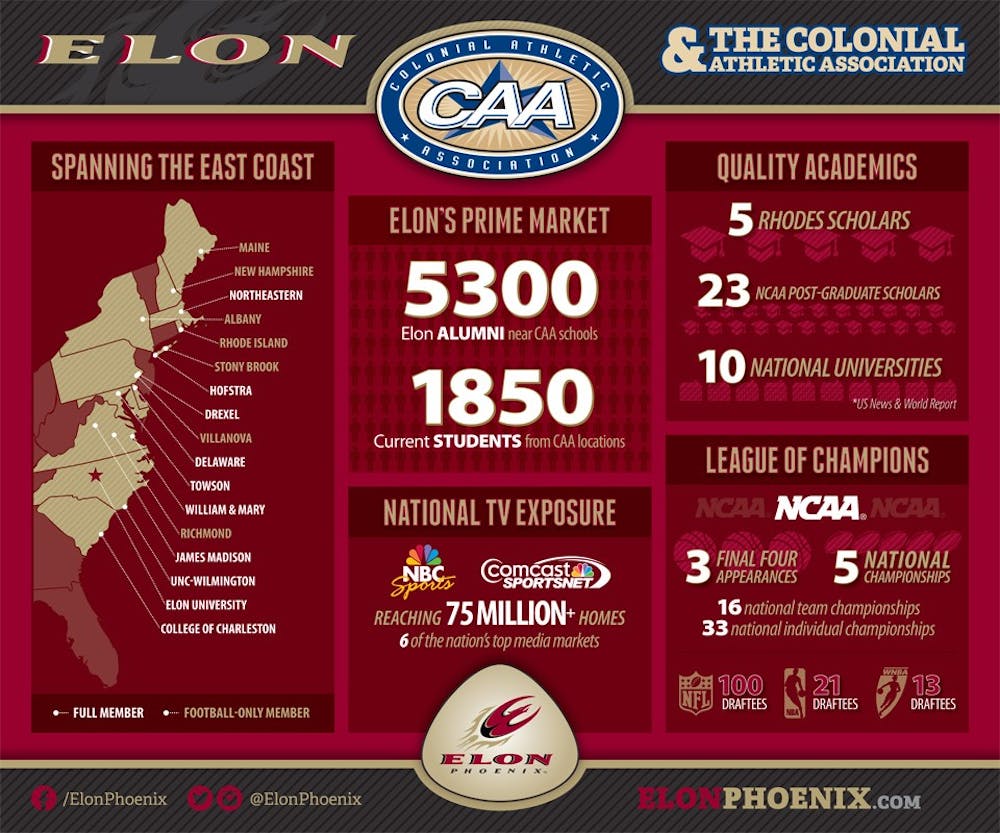 Elon University announced Thursday that it will leave the Southern Conference and join the Colonial Athletic Association (CAA) beginning in the 2014-2015 school year.

There are currently 1,850 students who are from the CAA footprint. Fifty-six percent of the incoming Class of 2017 also come from CAA territory.

"The CAA offers a great match with our strategic plans for Elon's future," said President Leo Lambert at a press conference in Elon's Alumni Field House on Thursday.

Elon has been a member of the Southern Conference since it split from the Big South in 2003. The Phoenix will remain in the SoCon until the end of next school year.

Lambert said the university spent the last month seriously considering the move to the CAA and on Tuesday, May 21, the Board of Trustees unanimously voted in favor of switching conferences.

The CAA is a Division-I collegiate athletic conference with member schools from Maine to South Carolina.

All 17 of Elon sports teams, including the newly added women's lacrosse team, will compete in the CAA starting in 2014.

"I think you have to look at it as we are committed to a Division I athletic program," said Athletic Director David Blank. "We're going to do everything we need to do to make sure our student athletes have great experiences."

How it Affects Elon

Since Elon is leaving the Southern Conference with less than a two year notice, the university is required to pay a $600,000 exit fee.

There will also be an increased travel cost which President Lambert hopes to combat with increased fundraising.

"There is no question about it, this does represent an expense increase for the institution," Lambert said. "But I like to think of it as an investment in brand recognition for all of Elon University."

Joining the CAA means Elon will have to travel up and down the East Coast to schools such as the University of Delaware, Northeastern University in Boston and Drexel University in Philadelphia.

"I can't move Philadelphia any closer to Elon," said CAA Commissioner Tom Yeager. "But we are working diligently to have our students best interests at heart."

"I know that our teams will love coming down here and competing in these beautiful facilities," he said.

But Lambert said the new changes are also about competing against schools that are on the same level academically. This will provide Elon students with more opportunities to present undergraduate research. The provosts of CAA schools formed the Colonial Academic Alliance in 2002 to work together on academic excellence.

"We believe the academic fit [of the CAA], with many nationally recognized institutions, is very much in line with Elon's expanding reach and national reputation," Lambert said.

Ten of the CAA schools are nationally ranked by the U.S. News & World Report and the conference has seen 22 NCAA postgraduate scholars. Lambert said that Elon is academically similar to CAA member, Hofstra University, a private college in New York.

How it Affects Elon Student-Athletes

CAA schools are in six of the top media markets in the nation. This past February, the CAA signed a five-year deal with NBC Sports Group to provide coverage of games to 75 million homes nationwide. Comcast SportsNet also provides regional coverage of CAA competition.

"It's also great for our student athletes to know that that kind of coverage is going to reach their hometowns directly and we're excited about that," Blank said.

Blank isn't concerned with the increase in travel. He said he doesn't expect many things to change.

"You don't go to every school and play them home and away," Blank said. "Travel will be very similar. We'll just replace the Southern Conference Championship with the Colonial Athletic Association's Championship wherever that venue is."

Besides the $600,000 exit fee, it is unclear if Elon will face additional penalties for leaving the Southern Conference.

Appalachian State and Georgia Southern were penalized by the NCAA after leaving the SoCon to join the Sun Belt, an FBS conference. They are not eligible for a SoCon title or a FCS playoff berth in 2013-2014.

College of Charleston and Davidson are facing no penalties for leaving the SoCon other than the exit fee.

"The precedent was set for the Southern Conference last year with the College of Charleston departing," Blank said. "The decision was made to allow the CoC to compete for championships during the year of their exit. We anticipate that will be a similar situation with all schools leaving the Southern Conference over the next year."

Blank and Lambert remain optimistic about the future of Elon Phoenix Athletics, along with the final year in the Southern Conference.

"Adults made these decisions, student athletes did not," Blank said. "They deserve the right to compete for championships."

The Commissioner of the Southern Conference, John Iamarino, released a statement on Elon's departure.

"In recent years, it became increasingly evident that Elon's negative view of the diversity in the Southern Conference was not shared by the majority of the membership," said Iamarino. "Our core group remains firmly committed to each other and to the academic and athletic success of the Southern Conference. We are preparing specific initiatives to achieve that success."