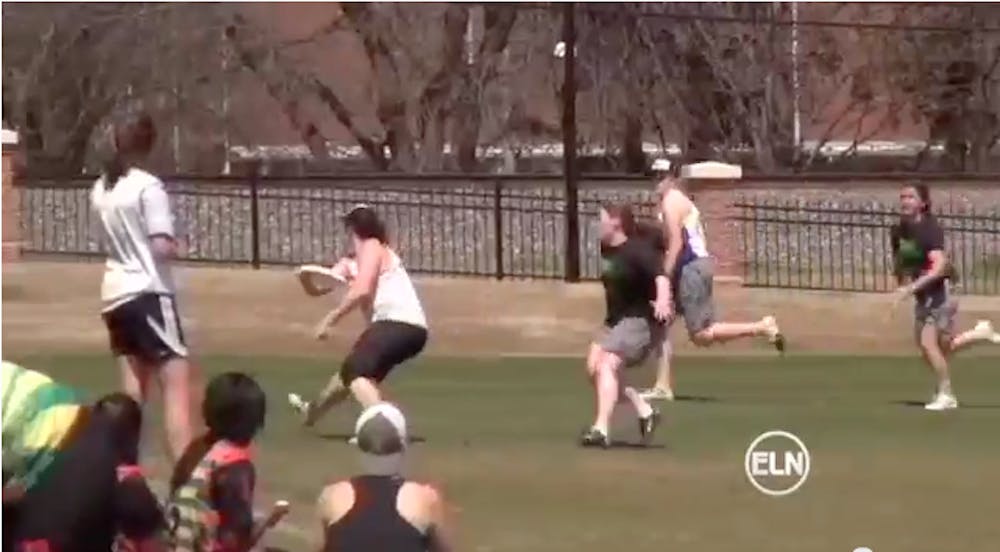 Alex Ziegler, a 2008 graduate, said the best part of the weekend was seeing how much the program has grown since she was at Elon.

"My freshman year was the first year there was even a girl's team. It's just grown exponentially so it's really nice to see what they've done with the program," said Ziegler.

Things got competitive as Elon faced off against their old friends and mentors. Coach Brian Dobyns pumped up the girls for the alumni game.

"You will find things as you go through the game that you can take advantage of," he said in the team huddle. "It's simply a matter of taking advantage of it - the choice is yours."

While this tournament gave teams the opportunity to show off their hard work and competitiveness, the ultimate goal was to have fun. Team captain Maureen Dougherty talked about the spirit of the game.

"We try to make it very fun very lighthearted, a lot of what ultimate is about is the "spirit of the game" so we call our own fouls and everything," Dougherty said.

Another tradition of the tournament was for teams to sing to one another after each match. Elon parents who came out to watch the tournament enjoyed this kind of fun and support among their daughters.

"I think all the parents enjoy watching a whole group of women support each other," said Jill Stempler-Olin, mother of co-captain Heather Olin.

With singing, dancing, and playing for the love of the game, the "Nutty Huck" tournament promoted friendship and competition, gave parents a chance to watch their daughters play and allowed for a homecoming for Elon alumni.

Although Virginia Tech took the championship leaving Elon to take fifth place, the tournament was a chance for the team to gear up for regionals, which will be held this weekend at Elon.