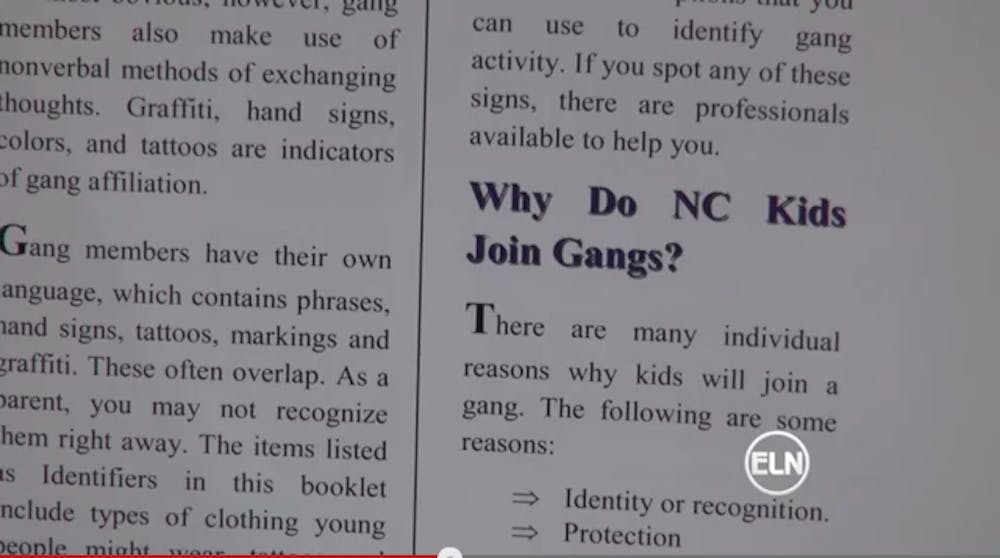 Right outside the Elon bubble students might not notice a big problem taking over Burlington - gang activity. I spoke with Sergeant Brandon Jones of the Alamance City County Gang Crimes Task force to find out more.

"On every level, I know in this county, except for maybe a Christian school or private school that I know of, I think we have documented gang members or gang affiliates in every single school from elementary school to high school in this county," said Jones.

Jones talked about kids and their involvements in gangs. Seeing young children involved has been hard on him.

"I know that anybody that has children, it's tough to see 9, 10, 11, 12-year-old kids that are 4th generation gang members and you're having to investigate crimes where they're either victims or they're assailants in these crimes because of this gang life and they don't know any better," said Jones. "That's the hardest part, just dealing with the young children that are the victims of all this."

"It's a feeling of acceptance or lack thereof and people prey on that. The gang members see these kids as easy targets that generally they'll have low self-esteem. They're gonna have some sort of bad home life," said Jones. "They may be out on the street at night because they've got nothing else to do because they've got parents that work 3rd shift to make ends meet. There's nothing there to keep them from joining these gangs."

So where in the area is gang activity highest? Jones said that's tough to answer.

"Our local gang members are so sporadic about where they commit their crimes and where they live. There's not an answer to that question," said Jones. "Another problem we have when people ask us that question is we have an influx of gang members from other areas such as Greensboro, Durham. They come to this area, commit crimes and then leave and that literally ranges from the east side to the west side of Burlington."

Once the task force starts enforcement on one crime, gang members just move onto another.

"The gang members, the gang crimes, they're so fluid, it may, it may be what we're doing that may affect that, you may see a trend. If we had a trend of home invasions like I spoke of last year, we ended up putting everybody in jail," said Jones. "So the home invasions went down, well then you have property crimes go up."

He told us that the Bloods and the Hispanic gangs are probably the two most prevalent in Burlington, but that neither is consistently more active than the other.

Along with their surveillance, investigating, and interviewing, the task force works to educate the community in hopes that it will also help reduce the problems.

"But we like to have an education and a prevention aspect to what we do because the way we look at it is if we can prevent the crimes from happening, then the enforcement is going to take care of itself," said Jones.