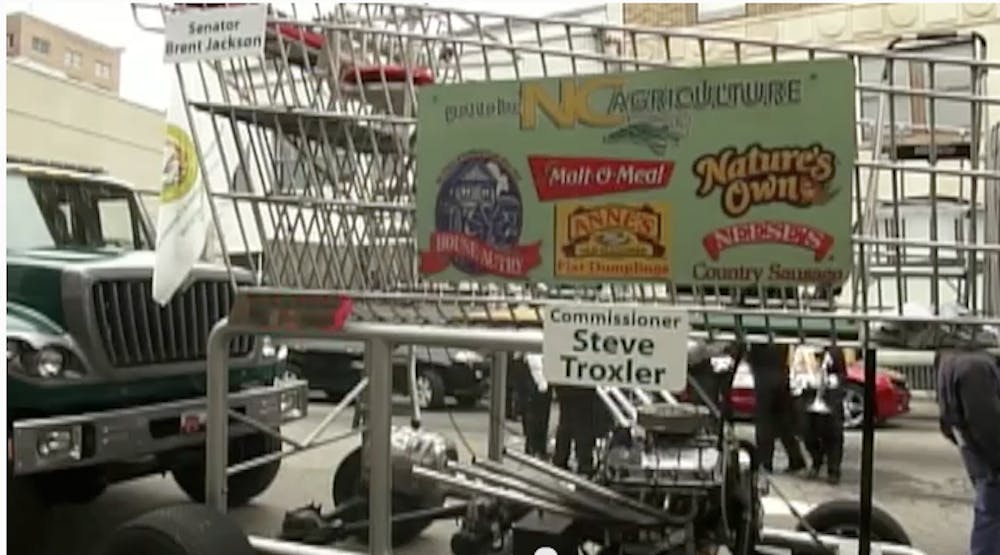 Floats are the main attraction at many parades but at Saturday's Gubernatorial Inaugural Parade, one of the floats promoted a local industry.

With more than 70 floats taking part in the parade it was hard to stand out, but ELN found one that made parade goers re-think how they buy their food.

Joe Sanderson, the Assistant Director of Marketing for the North Carolina Department of Agriculture said, "The cart is one of a few that are available. It came from St. Louis Missouri. We contacted them to bring one here for us to use to promote North Carolina agriculture.

They also use the massive shopping cart as a marketing tool.

"We use it to promote the fact that agriculture's our leading industry. We use it so that consumers can understand that it's a major part of what North Carolina's about. And we also use it as a tool to leverage sales to the retailers," said Sanderson.

The department thinks that the image of an oversized shopping cart is something consumers remember and associate with their cause. Sometimes they place the cart outside grocery stores to bring attention to the store.

"We've been in this game a long time, before the local foods were popular and um, but now it's an easier job to sell local products than its ever been. People recognize the importance of supporting the economy of the state," said Sanderson.

Resident Lucy Harris who saw the cart at the parade on Saturday agrees. She said, "I think, you always get attention when you do something unusual."

"You know, the bigger the better, the louder the better. It get's the attention of the consumer so we can get them the message about our leading industry," said Sanderson.

They use their RV as a marketing device as well but Sanderson said the cart is more popular.

"It's amazing how many people have seen the cart. They like the cart, they look for it wherever we are," said Sanderson.