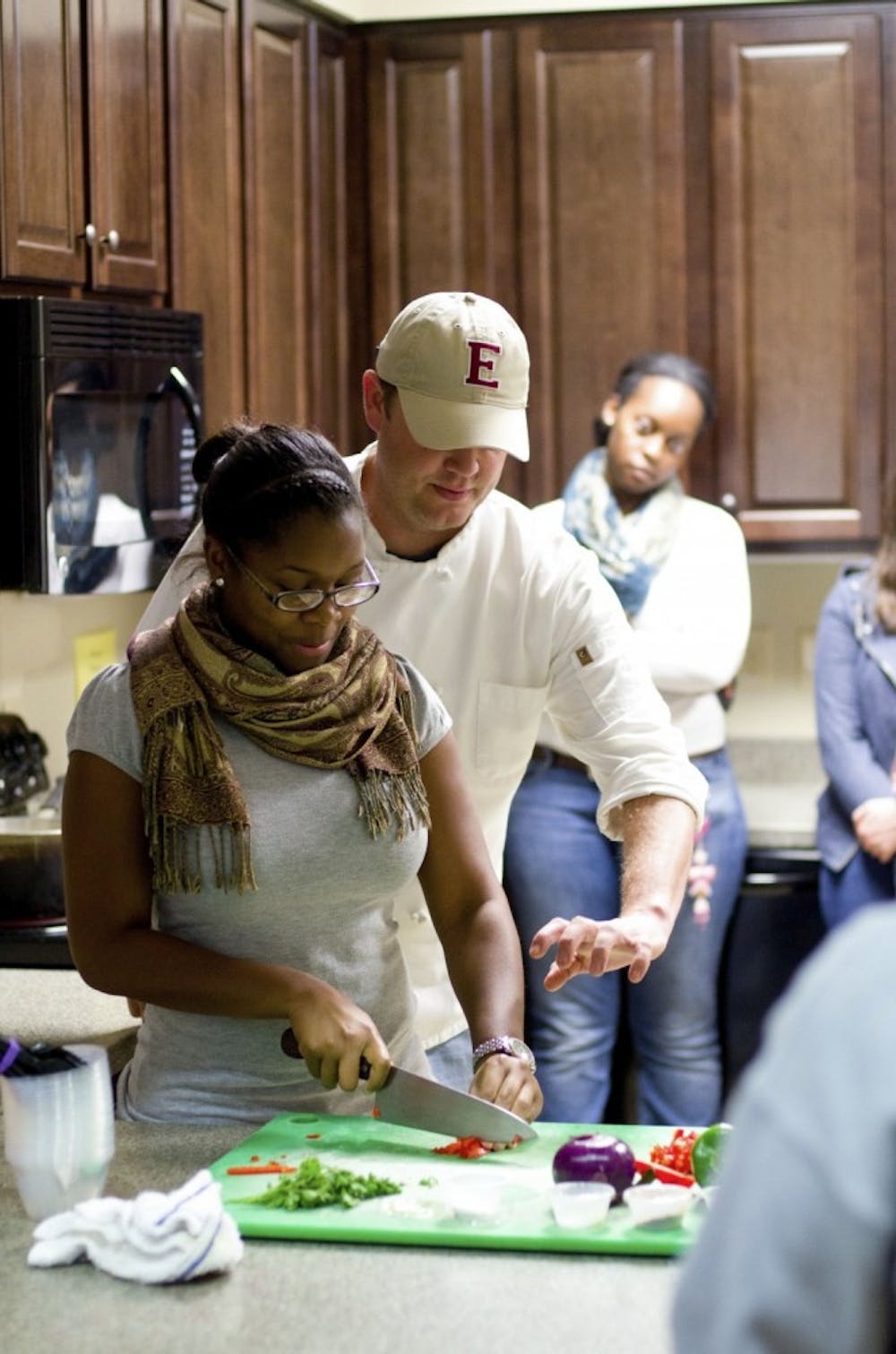 Cook Chris Russel shows Brittney Williams a student at elon how to cut peppers at the Station at Mill Point on Monday. Photo by William Kenyon, staff photographer.

Chef Christopher Russell has offered introductory cooking classes throughout the semester to Elon University students in each of the popular dining areas on campus. Russell is the owner of multiple local restaurants in the Elon and Burlington areas, including Town Table, B. Christopher’s and B’s Bistro.

“One of the things that kept coming up as they were building these beautiful facilities…was the amount of times the fire alarm goes off,” Russell said after his most recent session in the depot’s kitchen at the Station at Mill Point on Monday night.

In addition to the Danieley apartments and the community kitchens in particular dorms, the new Senior Village gives an additional 324 students living in on-campus housing the opportunity to cook their own meals.

He provided sessions for Resident Assistants at the beginning of the semester, and it has been left up to the RA’s to promote the remaining classes.

During the hour-long demonstration, Russell cooked a large pasta dish called Creole Shrimp Pasta. He walked through the process step-by-step, while offering detailed pieces of advice for each sequence, such as boiling water, properly handling pot ware, cutting veggies, and adding spices and herbs to dishes. Russell emphasized the fact his sessions typically involve cooking a healthy meal that could feed several people for around $15.

Senior Jesse Rexroad, said she was at the demonstration because she doesn’t successfully cook things.

“I’m an expert at the microwave, but I thought it would be interesting to learn other things,” Rexroad said.

Before the class, pasta, sandwiches and dinosaur-shaped chicken nuggets were popular items among students cooking repertoires.

“Why doesn’t Elon have a home economics class that you can take for credit?” she said.

Russell confirmed that the majority of his cooking sessions had been full; Monday night’s session exceeded the 10 student sign-up limit by about five students.

The second cooking session at Mill Pointe was originally scheduled for Tuesday, November 13th, but has been postposed until further notice.