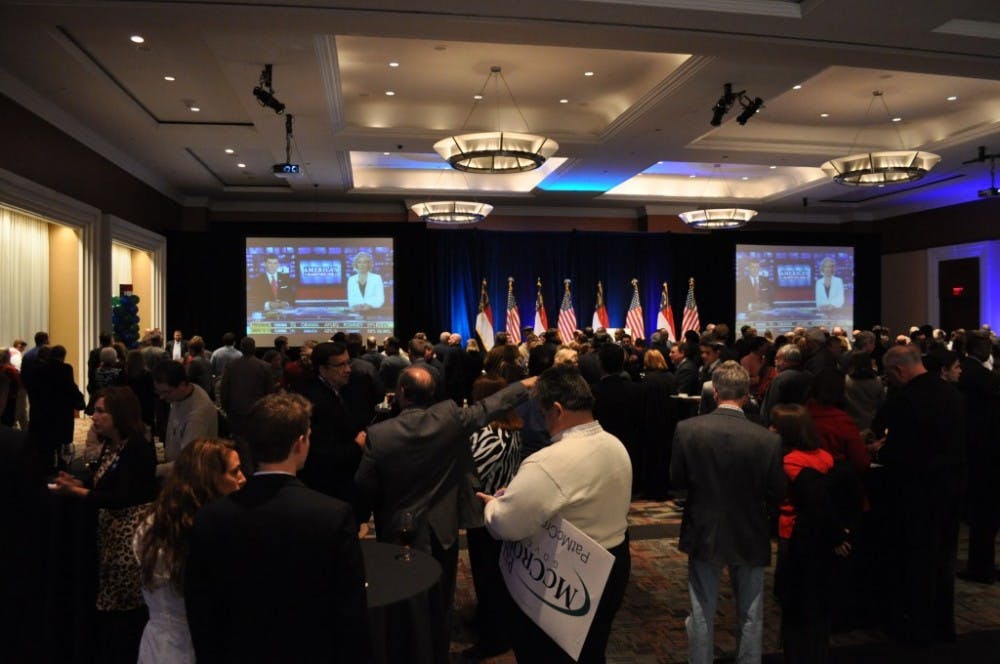 At the Westin Hotel in Uptown Charlotte, supporters of gubernatorial candidate Pat McCrory gathered to hear the results of the election. McCrory defeated Walter Dalton. Photo by Eric Dinkins.

CHARLOTTE-Republican Pat McCrory has won the race for governor of North Carolina with nearly 55 percent of the state’s vote.

This win makes McCrory the first Republican to win the N.C. governor’s race in 20 years. Lt. Gov. Walter Dalton (D) came up with 43 percent of the vote, while Libertarian Barbara Howe captured just above 2.1 percent.

In Raleigh, Dalton delivered a concession speech. He explained his journey throughout the campaign and how it taught him, and his party, a lot.

McCrory was the mayor of Charlotte, North Carolina’s largest city, from 1995 until 2009, serving a record seven terms. He ran for governor in 2008, but lost narrowly to Bev Perdue.

As governor-elect, McCrory spoke to a group of supporters in Uptown Charlotte on Tuesday night, emphasizing the “sense of urgency” in the state right now.

“People are hurting right now, and people are worried about their future, and that’s what we are going to begin working on immediately,” McCrory said.

McCrory emphasized a need for cooperation across party lines.

“We’re going to govern together, Republicans, Democrats, Independents,” McCrory said. “We’re going to bring this state together, the East, the Piedmont and the West, but we’re moving to Raleigh soon.”

“What we really need is for our elected officials to work together,” he said. “The reason I’m here is because there has to be a change.”

Aldrich wasn’t the only one to specify the need for change. Other Republican party supporters claimed North Carolina has been controlled by Democrats for too long and “100 years” was the figure used by multiple people in attendance.

McCrory assured change is possible, but only if every North Carolina citizen “exceeds their potential.”

“It’s time for a Carolina comeback, and it starts tonight,” he said.