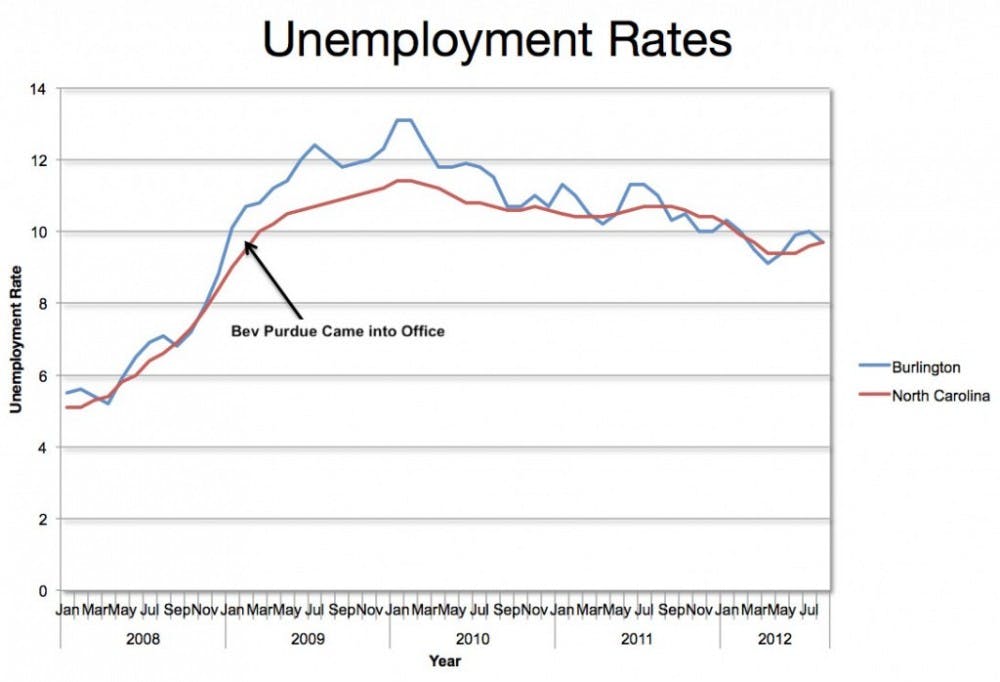 An election season inevitably brings much debate and discussion, especially with such different candidates to choose from. As expected, a majority of the chatter on social media sites, television ads and in–person centers on the presidential election.

But the elections at the state and local level will have a more personal impact on the lives of North Carolinians than some might realize.

For example, the next governor of North Carolina will have the power to appoint individuals to more than 400 different boards and committees, according to the Office of the Governor. These offices include Alamance Community College, Commission for Public Health, Domestic Violence, the State Board of Education and the Local Government Commission.

But the unemployment rate locally, in Burlington, in January 2009 was higher than the state’s average, at 10.1 percent. It has dropped to 9.7 percent as of September 2012, but is still above the state’s rate.

According to Dalton’s campaign website, he “will fight for businesses that make products in North Carolina, not overseas. He will push job training in growth industries like nursing and allied health, biotechnology, and in military contracts.”

In September, Dalton outlined his job creation plan, including the offering of tax incentives to companies that provide tax relief to small businesses and who hire long-term unemployed workers, according to a report by The Charlotte Observer.

Dalton also pointed out how his plan comes from numerous meetings he held with business, education and community leaders, helping him take a look back at the state of North Carolina’s economy and how he could improve it.

McCrory also offered a job creation plan in July that calls in both personal and corporate income taxes, as well as a more “aggressive energy exploration,” according to The Charlotte Observer’s report. Dalton said this plan could result in the increase of consumption taxes, ultimately hurting small businesses.

McCrory’s campaign website outlines his “seven-point” economic plan, which includes modernizing the tax code in order to “spur job creation, productivity and innovation” and reforming education to create a solid future workforce. Both candidates seek to alter education to fit the need for good workers in the state.

In the past four years while Purdue has been governor, there have been a lot of questions about her commitment to pushing for more funding in the public education system.

The 2009-2010 final appropriated North Carolina school system budget was $8,245,341,827 according to Department of Public Instruction reports. The budget was cut for the 2010-2011 school year to $7,360,833,223, down almost $800 million. This budget includes everything from central office funding to instructional supplies to funding for the bus system.

For the Alamance-Burlington School System (ABSS), which surrounds Elon University, this meant a $4.3 million reduction in federal stimulus dollars from 2011-2012, according to the ABSS website.

Along with the budget issue, the North Carolina high school graduation rate in 2012 was 80.4 percent, the highest in five years, according to the Department of Public Instruction.

Dalton aims to restore funds to public education, specifically by closing tax loopholes, according to his campaign website, directing revenue from these efforts to bring back funds. This would also give financial aid back to many students in college who lost it, according to WRAL.

In 2003, Dalton wrote the Innovative Education Initiatives Act, pushing for the establishment of the state’s early college high school system. This program links students directly with higher education partners, according to Dalton’s education plan. After five years, students get a high school diploma and two years of college credit or an associate’s degree.

This helps better prepare students to go to college or to enter the workforce after graduation.

McCrory hopes to develop two “paths to success,” according to his platform, that would allow for high school students to either have a diploma deeming them college ready, or one deeming them career ready. The latter would allow students to have skills to enter the work force or to attend community college.

His plan also calls for the implementation of new tests in the third and ninth grades to ensure students are at the level they should be in the respective grade level. McCrory also believes the only way to measure student success is to test students in basic skills in reading and math. This will allow the state to grade schools to establish “transparent, objective, and easily understood data to parents, educators and the public, and will spur improvement among all schools,” according to McCrory’s campaign website.

Republican candidate for the House of Representatives, incumbent Howard Coble, believes stimulating the economy through tax relief creates new jobs, according to his campaign website. Representatives from the House have the power to vote on legislation that would create these types of tax cuts for North Carolinians.

Former Sen. Tony Foriest-D, said job creation has to “supersede partisan bickering,” and according to his campaign website, the issue is finding the best way to do so.

Foriest believes each taxpayer should pay his or her “fair share” without concession, echoing Obama’s views.

Almost five years ago, the North Carolina unemployment rate was at 5.0 percent and between January 2008 and September 2012, the unemployment rate reached 11.4 percent at its highest point. Whomever wins this race could have a significant impact on the future of job creation both within the state and nationally.