Students weigh in on election year issues in political debate 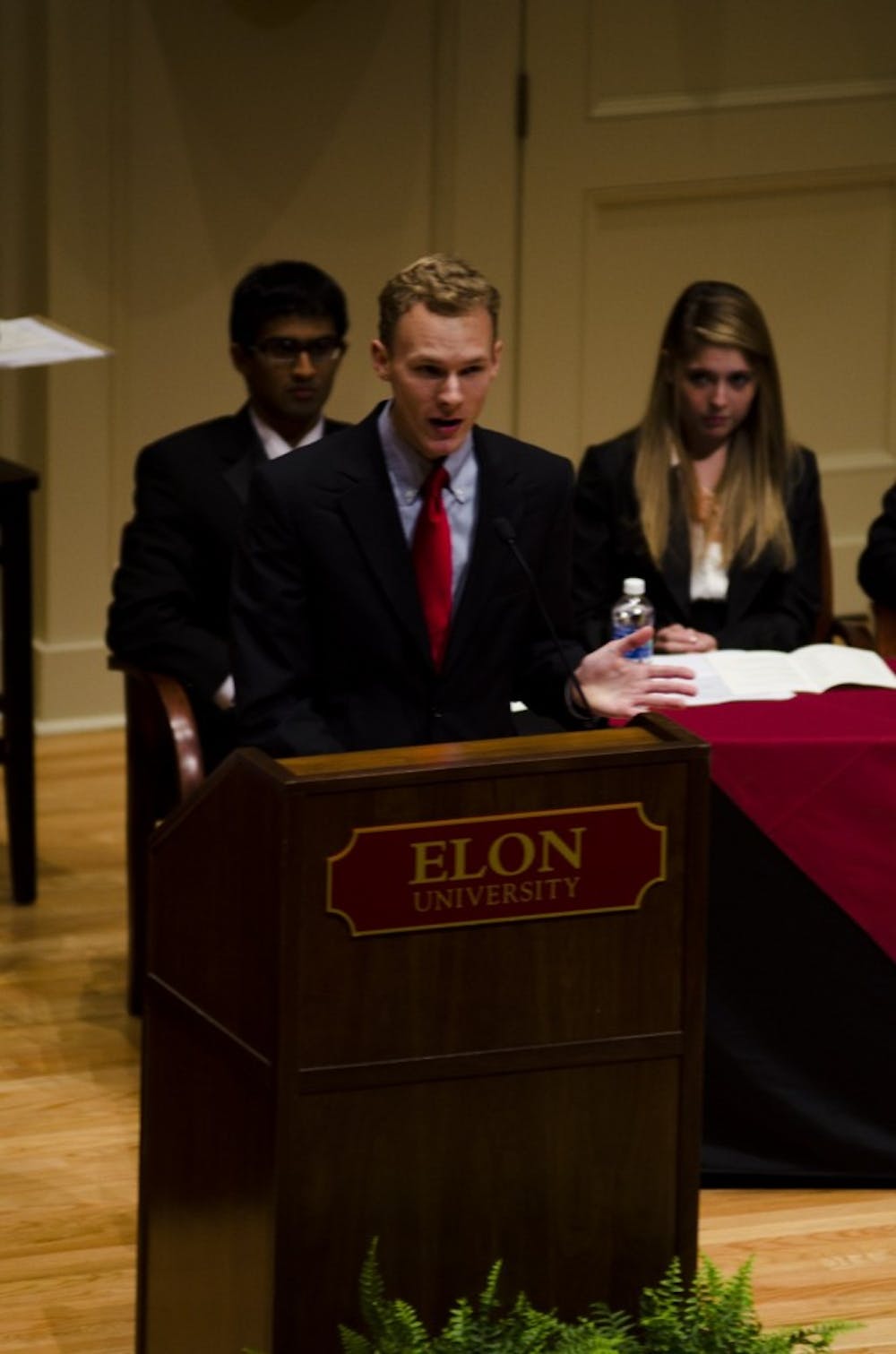 Twenty members of the Elon University community went head to head in a community debate. There was applause, there were challenges and there was a lot of waffling as four different ideologies met on stage in a mostly-full Whitley Auditorium Oct. 26.

Junior Ben Kashdan, one of the members of the committee that coordinated the debate, introduced the moderator, Dick Gordon, host of the WUNC radio show “The Story.”

“This is a terrific year for a debate,” Gordon said. “This isn’t play, not here.”

Several weeks ago, Elon students voted at College Coffee and online to select the debate topics: the economy, health care and same-sex marriage. The debate featured four teams of five students: Democrats, Republicans, Independents and Internationals. Team members either gave the team’s opening or closing statement or discussed one of the three topics. Each speaker was alloted two minutes of presentation time.

Following the structured format and a short break, Gordon engaged the teams with questions submitted by audience members and from Twitter via the hashtag #EUdebate. Topics included global warming, federal student loans, corporate tax rates and more on the topic of health care, among others. Gordon selected which teams would speak and even allowed for some banter between teams.

The tensest moment of the night came when Gordon veered from the agreed-upon debate format and asked each of the teams about the recent controversy on campus regarding Chick-fil-A and the rights of students to have a say in the choice of food vendors.

When Gordon brought up the topic, there was an audible groan, but at the end of the night, Gordon commended the teams for their performance.

“This is hard,” he said. “I’ve been particularly impressed with this group’s agility and intellect.” What did each team say?

In its opening statement, the team criticized the current state of the American political system and the bipartisan nature the first president of the United States warned against.

With respect to the economy, junior Natalie Cuzmenco said the current economic state of the United States is “indeed a crisis,” while pointing out the government’s failures in that area.

“We don’t need a new government Band-Aid for health care, no pun intended,” he said.

On the topic of same-sex marriage, Martin Fowler, a lecturer in the philosophy department, said independents neither endorse nor oppose the marriage of anyone.

To conclude, senior David Gagne pointed out that 40 percent of Americans now identify as “Independent,” something he attributes to the growing dissatisfaction with both the Republican and Democratic parties.

To open, sophomore Emily Ackers said the point of the International team’s presence at the debate was to remind the American people, especially those who are voting, that there is a world outside the U.S. that’s not limited to the Middle East and China.

“It is time for America to realize the world is changing,” she said.

Junior Ala Eddine Maaref compared the European Union and the United States during his statement on the economy, telling the audience the U.S. economy and other economies of the world affect one another, adding that while unemployment in the nation  has dropped to less than 8 percent, in the EU, it is still about 10.5 percent and forecasted to continue to increase.

On health care, sophomore Muhammad Musah recommended the U.S. look at other countries, such as France, as models for designing a new system.

To close, sophomore Nicole Payne urged the country to look at other countries’ programs as potential models for reform here.

In its opening statement, assistant bursar Jeremy Teetor caused a small stir when he implied the Republican Party and Tea Party movement were trying to “take the country back” from the president because of his skin color. A member of the Republican team later contested this point.

Regarding the economy, freshman John Crowder said under Obama’s leadership, the U.S. economy and its recovery were “alive and well.”

Ben Waldon, a senior, expressed his disappointment at how often  Obama’s health care law, the Affordable Care Act, seems to be misunderstood and tried to set the record straight.

But it was senior Carly Ledbetter’s statement during the same-sex marriage portion of the debate that garnered the most audible approval of the night.

Whitley Auditorium broke out in loud applause when Ledbetter said if the government was really concerned with protecting marriage, then they should outlaw divorce, not love.

Senior Joseph Perron repeated an idea heard multiple times at the Republican National Convention in August: Are we better off than we were four years ago? He cited statistics that the income of middle-class Americans has gone down, gas and health care prices have gone up and 70 percent of new college graduates are moving back in with their parents.

He said the fundamental difference between Obama and the GOP nominee Mitt Romney is that Obama believes all Americans should share in prosperity, while Romney believes Americans should all have the opportunity to prosper.

In the statement on the economy, freshman Rebecca Sansale shared the story  of her grandparents, who were immigrants to America who eventually started their own companies. She said Obama’s policies are stripping freedom from small companies like those her family owns.

Senior Mark Rehbein discussed health care by sharing facts and stating that the Affordable Care Act would take current jobs in the medical field away because it limited the amount of profit practices would make, thereby limiting their ability to hire more workers.

On the topic of same-sex marriage, junior Patrick Brown said that was a choice that should be left up to individual states, as it was with Amendment One in North Carolina this spring.

In their concluding statement, Senior Jack Minor said the U.S. was at a crossroads.