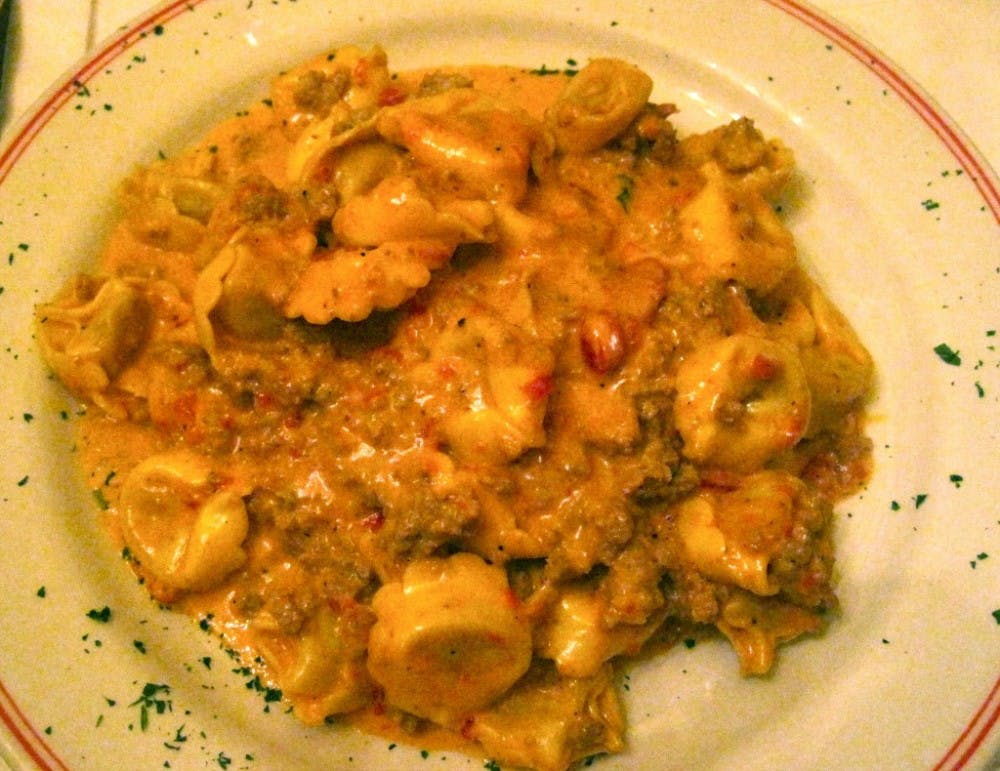 FLORENCE — When visiting or studying abroad in Florence, it is easy to get overwhelmed by the amount of restaurants. It takes time to tell the tourist traps from local, authentic gems. Everywhere you turn there are a number of places to eat, and all of them look delicious. Then you just cross your fingers that it will not hurt your wallet. Then you go inside, sit down and realize you want to eat every dish on the menu. That’s where I am here to help. I created a list of, in my opinion, the top seven primi piatti, or first course, pasta dishes in Florence that won’t break the bank. These are memorable meals from Italy visitors don’t want to miss.

This is definitely a dish that you cannot find in the States. The translation means “bows of pears in a sauce of cheese and asparagus,” but it was so much more than that. The different tastes in each bite take turns through your mouth. Each bite starts with the silky, creamy sauce. Then it leads to a taste of asparagus, followed by fresh, homemade pasta. Lastly, the surprisingly sweet pear explodes with flavor right as you are about to swallow. It is simply delicious. I have never tasted anything quite like this after being in Florence for two months and living in an Italian household my entire life. Quattro Leoni is a very nice restaurant with a variety of recipes on the menu, but this fiocchetti di pere is an absolute must.

Osteria Santo Spirito is a local favorite with authentic Tuscan cuisine. Everything on the menu sounded great, so I decided to ask our waiter if there was anything he recommended. Without hesitation, he pointed to the gnocchi. He told us people rave about the gnocchi every time they get it, and he was not exaggerating. This gnocchi, with soft goat cheese and truffle oil, was divine. It was cooked with a crispy top and was still bubbling when it was served. It was filling, creamy and full of truffle flavor. The warm, thick sauce mixed with the soft texture of potato gnocchi was just flawless.

Penne alla vodka became a staple in my diet last year. It was the first year I lived in an apartment with a full kitchen and was able to cook my own food. My roommate and I would always have cans of Paul Newman vodka sauce in our fridge and would dump it onto pasta and call it dinner. After eating penne alla vodka at Il Gatto e Volpe, I have a completely new perspective of the dish. Coming from my Italian family, I am spoiled with delicious pasta. Both my grandmothers and my Dad are terrific chefs, but focus on marinara sauces rather than vodka sauce. I decided to order the Penne alla Vodka because a friend that went abroad last year recommended it to me, and I wanted to finally taste quality vodka sauce. As I expected, the vodka sauce was so rich and flavorful.  The pasta was cooked perfectly al dente. It instantly became one of my favorite dishes in Italy. I was full after eating half of the dish, but had to keep eating because it was just too good.

Trattoria Anita is a local family-run restaurant that has become an all-time favorite. Its huge menu with a variety of choices always makes it difficult to decide what to order. Once I first tried the tortellini norcina, the difficulty on deciding has been forever gone. Norcina is named after the Umbrian town of Norcia, famous for their sausage and salami. The surrounding area is one of the largest producers of black truffles. Together, the two create a great dish for any type of pasta. Tortellini is smothered in a rich cream sauce, crumbled sausage and plentiful shavings of truffle. The crumbled sausage added a great texture and flavor to the sauce. This is a dish that generally is not found on most menus, so it was a delicious, unique treat.

Being in Italy for an entire semester, I have had the opportunity to try lasagna at many different restaurants. Nothing has come close to how delicious my Nana’s lasagna is, except for this one. I cannot say it is better or worse simply because it is cooked in a completely different way. The lasagna at Osteria Del Cinghiale Bianco is cooked al forno. Al forno food is baked in an oven, so the pasta is usually boiled before it is baked. This double cooking means it is served soft, not with the firm al dente consistency that Italians customarily prefer in pasta dishes. The soft lasagna covered with warm melted cheese was perfection. I don’t think I have ever finished a dish as fast as this one. I could not put my fork down. It had the perfect amount of cheese, meat and sauce that each and every bite had plenty of each. I highly recommend this for anyone who wants an Italian classic.

Trattoria ZaZa has mixed reviews here in Florence. Many people say it is a must for tourists, which is part of the reason it is not considered as authentic as many other restaurants. Nonetheless, my friends and I went one night and decided to make our own judgments. We were very impressed. I was recommended to order something with truffle sauce from one of the girls who studied abroad in Florence last year because Trattoria ZaZa is known for it.  What a great recommendation. My fettuccine was delicious. The creamy truffle sauce was light enough to not fill me up until I finished the dish, but heavy enough to be rich with truffle flavor. Northern Italy is known for their truffles, so it is a local specialty. Although I always like to try new things, I would definitely get this dish again if I return to Trattoria ZaZa.

My friends and I stumbled upon Osteria dei Pazzi while wandering around one night and decided to give it a shot. The food was great and the service even better. The chefs and waiters would sing to each other and make jokes. They were so animated and spirited while translating the all-Italian menu to us. I decided to order the spaghetti alla carrettiera after he told us it was a typical dish of Tuscany. Carrettiera means “cart-driver’s sauce” because it is the sort of thing that one expects to find in a truck stop. In Tuscany, it is any type of pasta served with a spicy tomato sauce. At Osteria dei Pazzi, this dish is simple, tasty and satisfying. It was the ideal amount of spicy with a definite kick, but not enough to make your eyes water. It was refreshing for such simple pasta to have just as much flavor as those with lots of other ingredients.