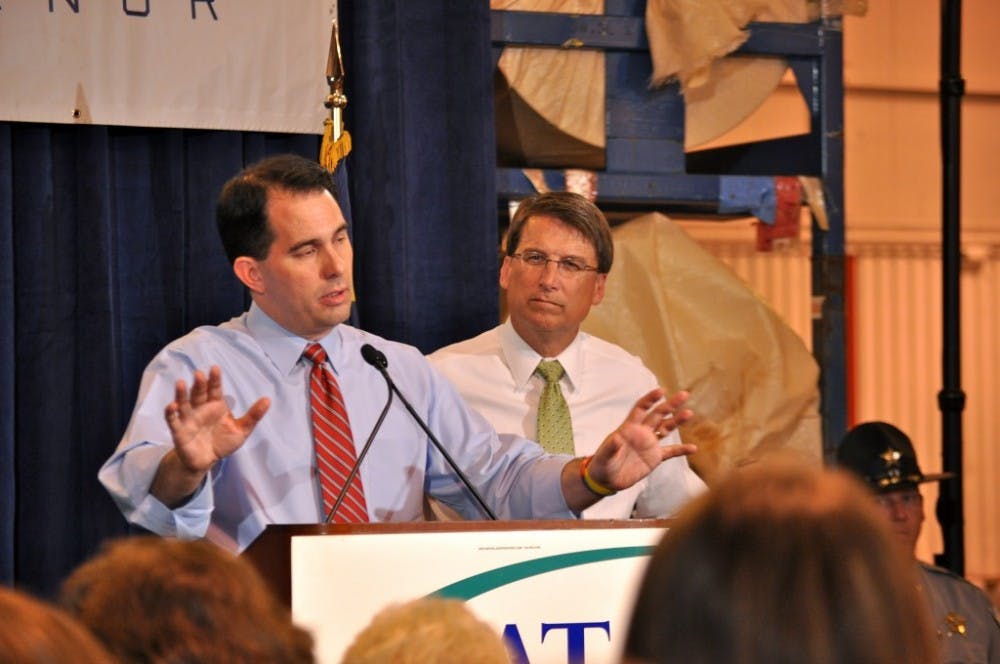 Wisconsin Gov. Scott Walker spoke alongside fellow GOP party member and former Charlotte mayor, Pat McCrory, promoting the North Carolina gubernatorial nominee’s “comeback” campaign to a small group of local party supporters in Burlington on Tuesday. The owners of Copland Fabrics, Inc. hosted the event in a small portion of one of the company’s warehouses.

“Isn’t it great to be someplace where they make something?” McCrory said.

[box] Check out more photos from the event.

This rhetorical question set the stage for what turned into a celebration of conservative idealism involving the current condition of the state’s economy. Both McCrory and Governor Walker emphasized the fact that NC has the fifth highest unemployment rate in the United States, while implying that the Democratic party is responsible for its continuous rise since 2008.

But the speakers didn’t solely focus on the Democratic Party’s mistakes over the past 4 years. Walker’s economic precedents in Wisconsin seemed to assure attendees that McCrory’s economic goals were achievable. Since elected, Walker has implemented major economic reforms in his state.

While recently speaking to the American Federation of Labor and Congress of Industrial Organizations, opposing gubernatorial candidate and current Lt. Gov. Walter Dalton even referred to McCrory as “the Scott Walker of North Carolina,” though his connotation was negative.

Walker is best known for the implementation of his infamous Budget Repair Bill in 2011 that aimed to diminish Wisconsin’s budget deficit by $3.6 billion dollars, which he claims to have accomplished by incorporating the same economic attitude that McCrory plans to establish.

“Real change isn’t going to happen in Washington, it’s going to happen in the states,” Walker said, and McCrory agreed. McCrory reiterated the importance of successful small businesses several times, and was supported by both Copland and Rep. Ellmers, both of whom operate their own businesses.

“If you elect the right person to be your next governor, you can turn things around,” Walker said.