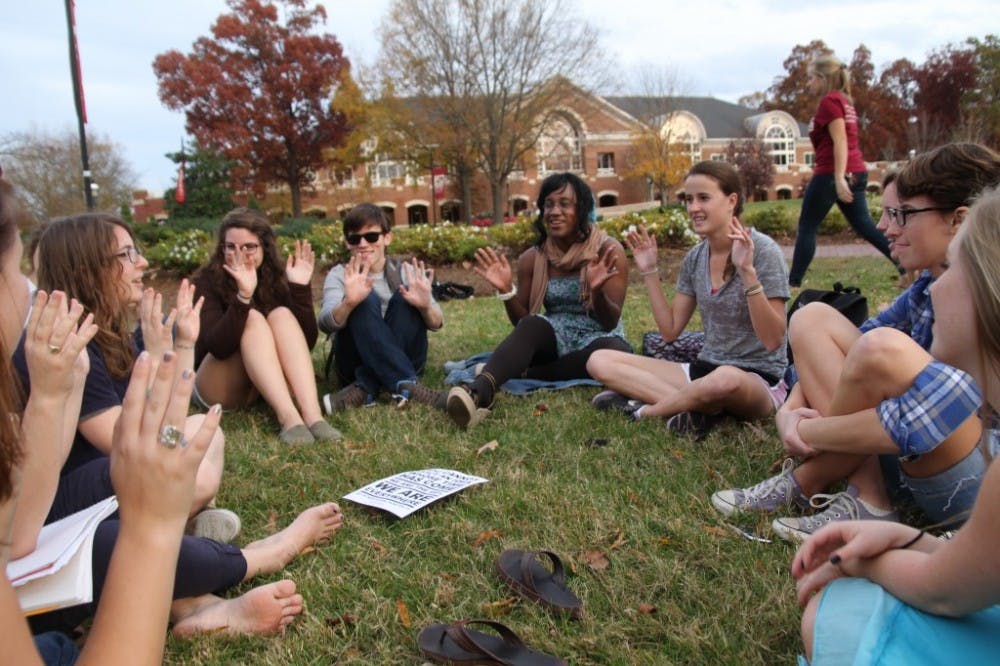 The Occupy Wall Street movement may have begun in Manhattan’s Zuccotti Park, but it didn’t stay there long. In October, a group of Elon students traveled to New York to join the thousands gathering in loosely organized protests to draw attention to corporate greed and economic inequality. But the experience, which included a standoff with the NYPD and triumphant march into Times Square, didn’t end there. In November, a small group of students assembled on the Moseley front lawn to launch a branch of the movement at Elon.

Within a matter of days in December, The Pendulum published two controversial editorials in response to the university’s policy of charging students with Honor Code violations for comments published by the media. After a sophomore received a notification of a violation for admitting to owning a fake ID in a front page story, The Pendulum ran “Hypocrisy Exposed,” a front page editorial questioning Elon’s approach to free speech. The piece was met with much criticism from students and staff, and The Pendulum published a follow-up clarifying the stance of the organization.

Bulldozers and orange construction wire have become just as common as squirrels and oak trees in some locations on campus, as the university juggles multiple building projects. This semester, Elon broke ground on the Numen Lumen Pavilion, which will serve as the university’s Multi-faith Center, set to open next January. The Station at Mill Point, a housing complex for upperclassmen, is on target to be completed prior to move-in day 2012, despite some pushback from locals. The Lakeside Dining Hall, an addition to the Moseley Center is set to open in December. Other projects include the construction of a career services area for the Elon Law School and a softball park.

Housing Selection
This spring, Residence Life revised the process for selecting housing, revoking the option for juniors and seniors to squat in university-owned apartments. With the addition of The Station at Mill Point for upperclassmen, The Oaks transitioned to a residential area primarily for sophomores. When the on-campus housing cap for juniors and seniors was met during the selection process, roughly 60 students were left on a waitlist without any definite housing plans for the fall.
Elon Remembers 9/11

In commemoration of the 10th anniversary of the attacks of Sept. 11, the university community reflected on a decade of change, growth and renewed hope for the future. Alumni and staff shared memories of an atmosphere of uncertainty and fear on campus that Tuesday afternoon. Witnesses of the attacks relived their experiences and shared how their lives were forever changed. Muslim-Americans spoke of the daily challenges and small victories of residing in a country that now viewed their religion as a legitimate threat. And on the morning of Sept. 11, 2011, the campus community gathered for a ceremony in memory of the attacks.

In September, two students were subjected to racial slurs while walking on campus and, within days, both the student body and university staff responded in force, forming movements intended to increase awareness of  diversity. Following the creation of the Not On Our Campus slogan, presented during a speech by President Leo Lambert at a special College Coffee, a group of students responded with the Now What? movement, challenging the university’s overall response to discrimination. In February, just weeks after a student reported being targeted with a homophobic slur, the faculty unanimously approved a new bias and discrimination policy simplifying the process of reporting such incidents.
Limits of Diversity

Residence Life at Elon issued an official apology following the forced removal of a poster from the room of senior Taylor Ferguson, a resident assistant in the Colonnades neighborhood. During a special tour of the new residential area, Residence Life staff asked Ferguson to remove two posters from her wall — one showing two women kissing and a second with two shirtless women but lacking any full frontal nudity — without providing her with an explanation. Ferguson, who identifies as a bisexual, said the experience exhibited a lack of understanding of diversity by the university.

Liquor by the Drink

In November, a referendum passed allowing liquor by the drink to be sold in the Town of Elon, following a push from local bar owners and an official vote. The idea was originally presented to the Board of Aldermen by Peter Ustach and Jeff MacKenzie, owners of The Fat Frogg Bar & Grill. The board discussed the measure in July and decided to add to the ballot a referendum, which passed with 75 percent of the vote.

The LGBTQ community on Elon’s campus has enjoyed an active year, including the creation of an official office on campus, sponsoring of a successful Pride Week and vocally opposing Amendment One. Kirstin Ringelberg, associate professor of art history, officially took on the position of coordinator for the new LGBTQ office in December but has not been alone in her efforts to gain recognition and rights for the community and its allies. Ross Wade, assistant director of career services for the School of Communications, maintains the QueErLON blog to share stories and the campus has repeatedly rallied against the amendment to the North Carolina constitution that succeeded in defining marriage between a man and a woman as the only legally recognized relationship in the state.  While this month’s pride week shed light on the stigma surrounding the LGBTQ community, the work is ongoing as, for example, junior Laura Lee Sturm leads the charge to offer gender-neutral housing on campus.

during the past academic year. Lauren Astley, an incoming student who would have joined the Class of 2015, was allegedly murdered by a former boyfriend last July. In April, her parents, Malcolm Astley and Mary Dunne, visited campus to commemorate Lauren’s life and share the dangers of dating violence. Earlier this month, sophomore Jordan West died after developing breathing problems in the middle of the night. An active volunteer both at home and within the local community, West is remembered as a bright, engaging student. The staff at Elon also lost some of their own last summer. Melody van Lidth de Jeude, a professor in the School of

Communications, passed away in May 2011. In September, a bench was dedicated in her honor outside of the School. In February, Elon lost Jim Pickens, a former professor of psychology, and Brian Collins, former associate director of Residence Life, passed away in March.

... and gains
Elon welcomed fresh faces into positions of leadership on campus this year. In a runoff election, Darien Flowerswas voted the incoming executive president of Student Government

Association, campaigning on a platform of experience, transparency and relevance. His term, along with the other newly elected students, began April 1. The university also welcomed Tom Brinkley as the new head of the revamped Student Professional Development Center and Cliff Parker as the new chief of the Town of Elon Police. Other additions included: Joan Ruelle as dean and university librarian, Susan Kirkland as assistant vice president of finance and Josh Hexter as the first coach of women’s lacrosse. The search is ongoing for dean of the Love School of Business.