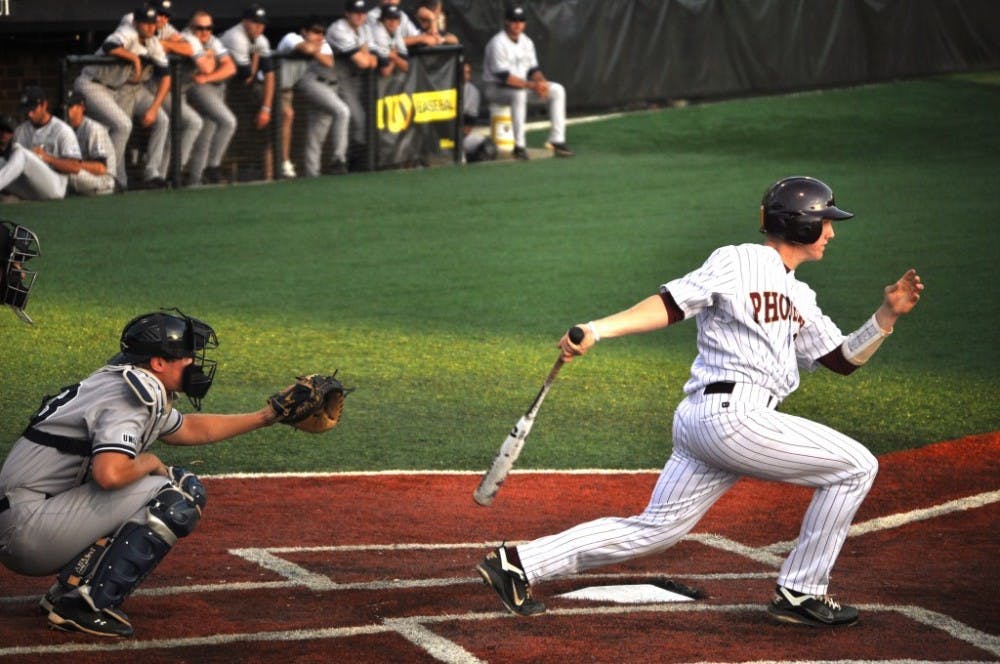 With one majestic swing of the bat, Elon University sophomore catcher Ryan Kinsella cleared the dugout and sent their victims, UNC-Greensboro, home on the wrong side of a three-game sweep.

It was the bottom of the 10th, the score tied at 1-1. Two outs had been recorded and an 11th inning seemed inevitable. But Kinsella launched a 2-2 fastball over the wall in left center field for a two-run walk-off home run and a three-game winning streak.

“It was just a fastball up,” Kinsella said. “(UNCG pitcher Tyler Hollstegge) has been throwing a lot of fastballs and I tried to sit on it and make something happen.”

The reason the Phoenix was even in position to win its series finale was the man on the hill.

Junior southpaw Spencer Medick struck out a career-high 13 hitters in a career-high 9.1 innings pitched. Brilliant location (zero walks) and damage control (only one batter crossed the plate) gave Medick a chance to keep his team in the game.

His performance earned him rave reviews from his head coach.

“I’ve been here 16 years, and I’m about 100 percent sure we’ve never had a guy go into the 10th,” coach Mike Kennedy said. “He was just so good. I’m looking up, thinking to myself, ‘I got to get him out of there.’ But the innings got easier.”

It was a series that ended a 2-4 stretch over the previous two conference series and brought a winning attitude back to the Phoenix dugout.

“Winning’s fun,”  Kennedy said. “When there’s a good atmosphere around losing, then I’m going to get away from it. I don’t want that a part of our program.”

Elon (26-20, 16-8 Southern Conference) has a home-and-home two-game series with Wake Forest this week before hosting Western Carolina University for three games May 5-7.

The Phoenix has had no luck against teams from bigger conferences this season. Elon dropped all nine games it has played against opponents from the Atlantic Coast Conference and Southeastern Conference. It’s a feat the team will try to change against the Demon Deacons this week.

“It’s not so much that it’s the ACC,” Kennedy said. “It’s just that we’re coming off a three-game series and we want to keep playing well. You want to enjoy that energy that comes with winning so we definitely want to do that.”

With just six conference games left, Elon is deadlocked in a third place tie with Samford University. The Phoenix will attempt to overtake the Bulldogs before the conference tournament begins May 23.

“(The series against Western Carolina) is definitely real important,” Kinsella said. “Every game’s important. But they’re a team that can really take a series from us and we can’t let that happen.”

If Elon can produce dramatic home runs and timely pitching, perhaps they won’t let it happen.