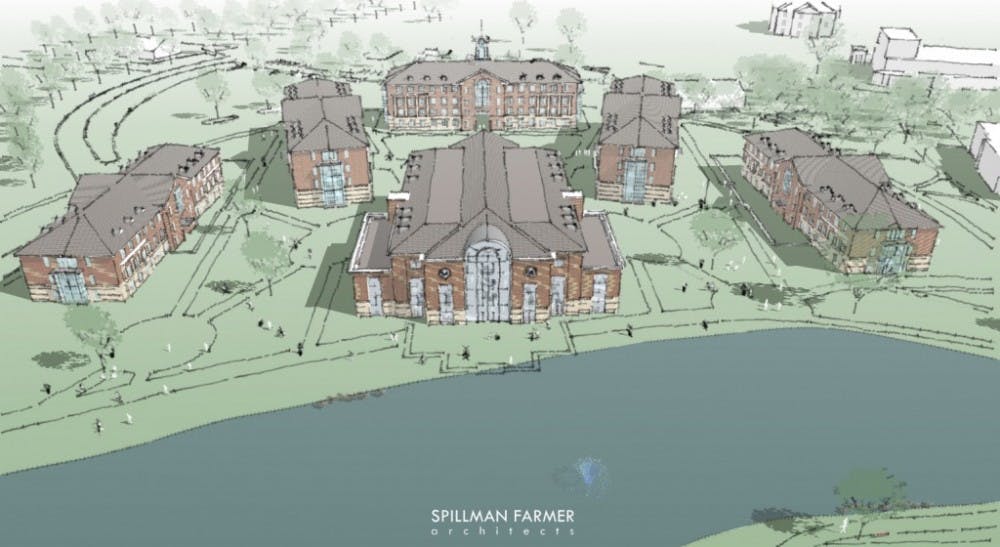 The Global Neighborhood housing complex, which is scheduled to be completed in two stages by 2014, has been re-designed because of financial concerns and new conceptual ideas.

The original site plan consisted of four four-story buildings, each with a common space on the first floor and residence halls on the upper three. The new plan consists of six buildings, which will either be three or four stories tall. Five of the buildings will be residence halls and the sixth, called the Anchor building, will be built specifically for a variety of programming. The common space areas, which will include faculty and staff offices and multipurpose rooms, are now designed to be in the Anchor building.

One of the primary reasons for the re-design was the push to be more cost efficient, according to Mike Dula, Elon town manager.

“There was some dissatisfaction with the costs when they put it out for bid the first time, and they thought they could re-engineer it and accomplish the same purposes without quite as much cost,” he said.

Specifically, the type of steel needed was adding to the expense, according to Brad Moore, associate director of planning, design and construction management at Elon University. But it was more than just the cost concern that inspired a new plan, he said.

“Because the common spaces were on the ground floor, it forced us to use structural steel, which is a lot more expensive than other building types,” Moore said. “But also, I really like the design of Colonnades C, D and E, so we are using a similar concept to that and it allows us to put everything in the same building, but also get a more programmatic space.”

The faculty and staff offices and multipurpose rooms will be larger than what they had been in the previous design, Moore said. The Anchor building will also contain a large grand hall, a small dining venue and a media room. The faculty offices and student meeting rooms will be located on the second floor, and the Isabella Cannon International Centre will be on the third floor, he said.

Construction will begin following graduation, Dula said. The first residence hall will be completed August 2013, and the rest of the buildings will open August 2014. Although technically part of the Global Neighborhood, the dining hall attached to Moseley Center that is currently under construction is separate from the re-working and will be completed by December 2012.

The Town of Elon Board of Aldermen, which approved the original plan last year, re-approved the plan for design, water and sewer hookups and traffic and parking, Dula said.

“It had to come back through with a new design, but it already had an approval, so it was just modifying that approval because the number of people involved is about the same,” he said.

Despite major revisions, some parts of the plan did not change, according to Moore. The new plan still calls for 595 beds and a variety of room types, including some singles, doubles and individual single rooms that share a bathroom.

The new residence halls will be occupied by primarily freshmen, but space will be reserved for sophomores, juniors and seniors as well. All students will have the option of joining a learning community, Moore said. He said he thinks the complex will be a very active and engaging place to live.