Cuthbertson thrives in maroon and gold through coaching change 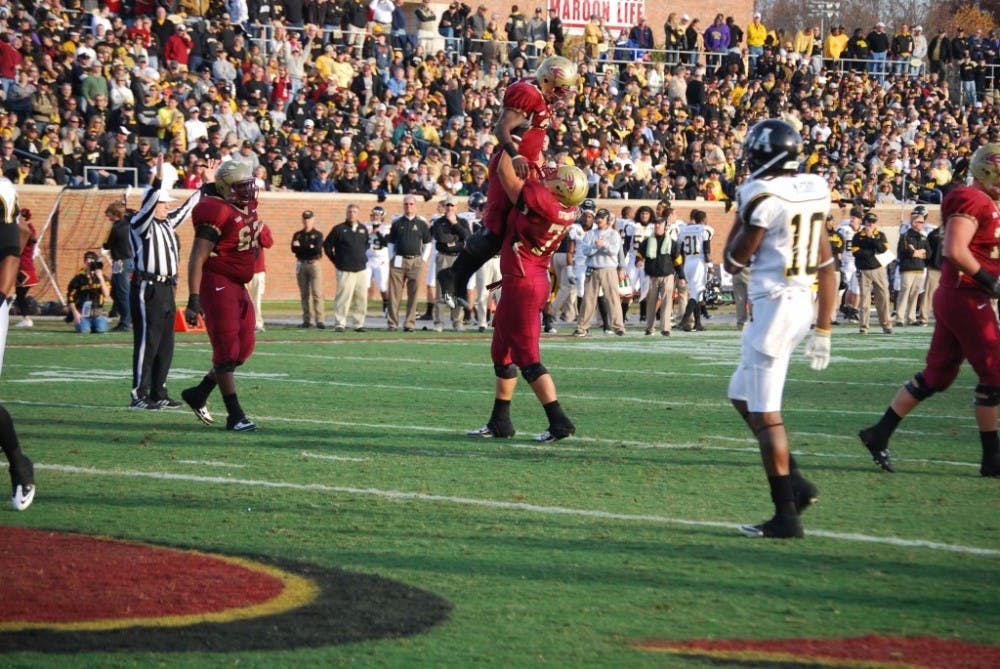 It wasn’t too long ago that Ned Cuthbertson had never heard of Elon University.

In December 2006, Cuthbertson was a senior offensive lineman at James F. Byrnes High School in Duncan, S.C. While going about the normal holiday traditions, Cuthbertson got a phone call from the Phoenix coaching staff asking him to make an official campus visit.

Cuthbertson agreed to tour the campus and four years later, he still remembers that trip vividly.

“I just felt like this was the place,” Cuthbertson said. “It just had that ‘it’ factor of everything I was looking for.”

A three-time state champion at Byrnes, Cuthbertson entered Elon already well-versed in blocking for talented running backs. And there was nobody better than teammate and future University of South Carolina star halfback Marcus Lattimore, Cuthberton's teammate at Byrnes for two years.

“Marcus was the man. Literally,” he said. “He was the only freshman that started my entire career there.”

Sixty-five months since receiving that phone call, Cuthbertson’s career on the gridiron is over. The physical education and health major will walk across the stage and claim his diploma May 19, exiting the life of a student and entering life as a high school teacher and offensive and defensive line coach at Chase High School in Forest City, N.C.

While his first four years at Elon (he redshirted as a true freshman) were a symbol of constants, Cuthbertson had to adjust on the fly to a new coaching staff his final year at Elon.

“The only big change was our offensive line coach put us in a three-point stance,” Cuthbertson said. “My entire football career I’ve primarily been in a two-point stance and so that was kind of shocking and new to me.”

Cuthbertson adjusted to the changes — and there were many, among them the transition from four-year starting quarterback and Cuthbertson’s roommate Scott Riddle, Class of 2011, to junior Thomas Wilson — and thrived in his last season, starting all 11 games. His efforts earned him the team’s Most Outstanding Offensive Lineman Award at the year-end banquet as well as being named to the all-Southern Conference first team by the league's coaches and the second team by the SoCon media.

“Ned is hands down a leader on and off the field,” sophomore offensive lineman Gavin Billings said. “He’s a guy with a lot of integrity, always positive and encouraging.”

Four and a half years ago, Cuthbertson would have seen no problem fitting into the crowd. Before he got a recruiting phone call, he couldn’t have spotted Elon on a map.

But as he’s about to leave Elon, Elon will never truly leave him.

“I bleed the maroon and gold now,” he said.