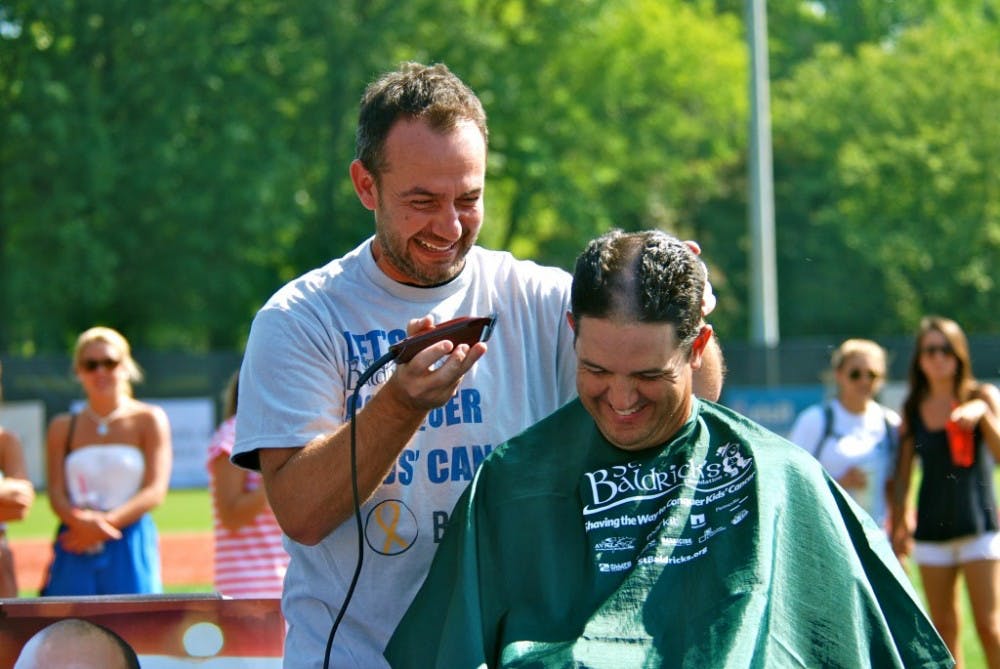 Garrett Koster is sitting in a chair positioned at home plate at Latham Park, posed to destroy everything he’s been working on for the past two years.

The senior shortstop is motionless as his girlfriend of two years, junior Emily Swapp, turns on a set of clippers and starts to trim away at Koster’s curly locks.

He is one of 39 players and coaches on the Elon University baseball team participating in BaseBald, a charitable initiative benefitting the St. Baldrick’s Foundation and childhood cancer research. It’s a great cause, but one that leaves Swapp nervous. She hands the clippers off to a barber, who finishes the job.

“I’ve seen (Koster with little hair) once and it wasn’t pleasant,” Swapp said. “So now I’m nervous because it’s taken him two years to grow it out.”

As Koster steps out of his chair, bald, he wonders aloud how on Earth he will be able to fit into his size 7 1/8 hat. It’s a common worry among the bunch.

Quinn Bower has perhaps the longest hair on the team, yet he’s still almost indecipherable from his twin brother Blaine in the eyes of head coach Mike Kennedy.

“There’s no way coach can tell the difference between me and my brother now,” Bower said. “He even got us wrong today and I still have (my hair). There’s going to be no way.”

Bower said he may have to stick newspaper in his hat to get his lid to fit properly because he’s not sure new caps are in the budget.

But budgetary concerns weren’t a problem for Tyler McVicar. The freshman infielder raised a team-high $5,445 for St. Baldrick’s, a surprise to nobody within the Elon program.

“He was asking people back home, his school (for donations),” Bower said. “Five thousand dollars is a lot of money. It’s awesome.”

McVicar’s motivation was personal. Back in 2008, his childhood friend, Danny Williams, passed away from osteosarcoma, a form of bone cancer.

McVicar and Williams grew up playing sports together in Melrose, Mass. The two didn’t talk as much when McVicar chose a different high school, but McVicar still maintained contact with Williams until he no longer could.

“He got to a point where he was sick and a lot of people couldn’t get in touch with him because his immune system was too low,” McVicar said. “I got a call from one of my friends one day and he said that he passed away.”

McVicar wears a green wristband each day to honor his friend. The band reads “Always in our hearts. Danny. 10-25-08,” a constant tribute to a friend lost far too soon.

On this day, before play has even begun, McVicar’s teammates have a surprise for him, a surprise that has the freshman choked up.

“I guess Coach (Mike) Kennedy talked to my dad about the green bracelet I wear,” McVicar said. “I came out to the field today and Garrett put his wrist in my face. The whole team and all the coaches are wearing the bracelet with his name on it. It’s pretty cool.”

While it’s true that hats won’t fit correctly, girlfriends will need to adjust to their boyfriends’ altered looks and coaches will have to separate once again identical twins, McVicar said things could be worse.

“After seeing what my friend had to go through and the stuff he had to do, I think shaving our heads is nothing compared to the pain he looked like he was going through,” McVicar said.