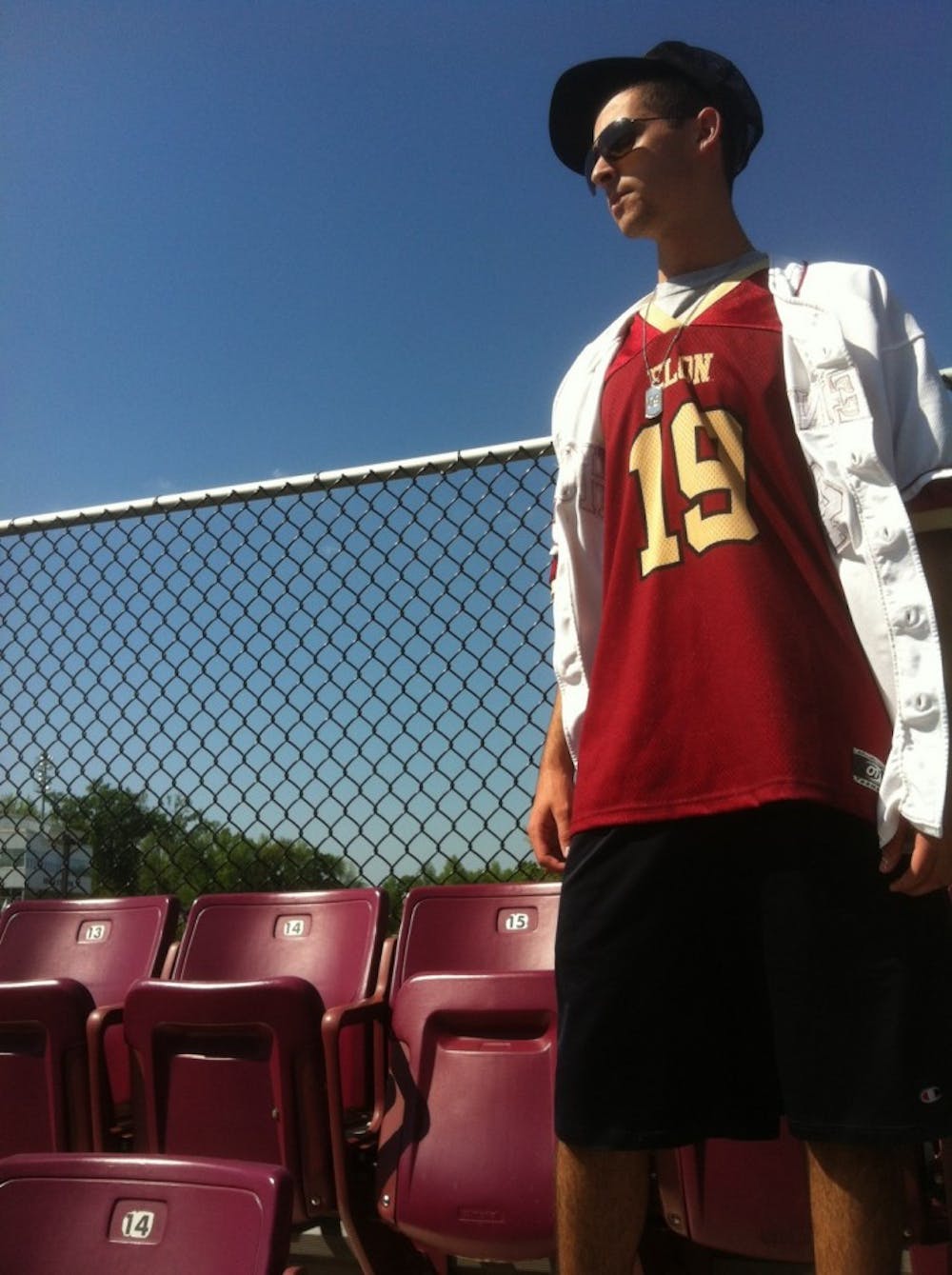 It takes about 15 minutes for Steve Roth to morph into his alter ego.

First, the junior throws on a No. 19 Elon football jersey. Next, he wears a Phoenix baseball jersey on top of it. After throwing some pants on, Roth grabs his Aviator sunglasses. It doesn’t matter what time of day or night — these shades are essential. Finally, he puts on a Coach hat and the look is complete.

Roth brings along his trusty sidekick and roommate, senior Max Gongaware, and a tub of props with him to the Elon Phoenix baseball game. For three years now, Roth has made his presence known at Latham Park.

“There’s not a whole lot of students that go to Elon baseball games,” Roth said. “And that’s a shame. So one thing I wanted to do was be loud and obnoxious so that not only could people enjoy the baseball game, but maybe get some entertainment, too, so it’s even more of a reason to come to baseball games.”

Roth’s taunting starts at the game’s first pitch — sometimes even earlier than that. As Towson University’s Brendan Butler steps up to the plate in the Tigers game against the Phoenix April 13, he’s greeted with a loud, screeching “Brendannnnnnnnn” that carries on throughout the at-bat.

Later in the inning, Tigers right fielder Dominic Fratantuono enters the batter’s box. This time Roth chimes in on the No. 3 hitter’s surname. “Fratatatatatanino!” Roth exclaims. Those in proximity to Roth, mainly adults past their college years, can’t help but laugh at the oddity.

In addition to yelling at the players, Roth must keep the umpires honest after what he perceives are bad calls.

“When I say something, everybody can hear, whether they want to or not,” Roth said. “So, when we all get on the umpires, they understand they messed up or at least they made a questionable call.”

Conor Glassey has been writing for baseball magazine Baseball America since 2008. His job description is to watch as much baseball as possible, so he makes it to about 70 high school and college games per year.

During a March 9 contest against Georgia Southern University, Glassey tweeted “I think Elon might have the most annoying fan in the country. A young Gilbert Gottfried.”

Gottfried is a popular actor and comedian who, among other roles, voiced Iago in the film Aladdin.

“Chris Beck was pitching for Georgia Southern,” Glassey said. “He was just screaming at him and kept yelling ‘Christopherrrrr’ in this really annoying voice, and that’s what made me think of Gilbert Gottfried.”

“Personally, I thought I was louder than Gilbert Gottfried,” he said. “But I still appreciate that as an insult-slash-compliment.”

Roth wears the distinction of “most annoying fan” like a badge of honor. He’s there to get in the other team’s head, and that’s just what he does. He’s even earned himself a semi-cult following because of it.

He’s been asked for his autograph a time or two. But nothing compares to what happened at the April 10 game against East Carolina University, when Roth had a run-in with the father of East Carolina catcher Zach Wright.

Wright’s father produced a printout of Roth’s face from Elon outfielder Niko Fraser’s blog and asked Roth to sign it. After introducing himself to Roth, things got stranger.

“He invited us to the East Carolina game later this year at East Carolina,” Roth said. “At that point, I said ‘OK, maybe we’re interested in doing that.’ He said ‘We got to get you guys out. We got to get you tickets.’ I’m like, ‘Oh, should we trade contact information?’ and he says, ‘I already got your number.’"

Turns out, Wright's father had printed out Roth's resume, which he had found online. The resume included “SuperFan's” phone number.

Wright’s father went on to greet Gongaware by name and said he enjoys the radio show Gongaware and Roth host together for WSOE. Roth said the incident creeped him out a little bit, but after taking a moment to process things, he went back to his heckling ways.

He doesn’t simmer down in the slightest when the Phoenix comes up to bat, either. In his prop bucket, Roth has swimmies for junior catcher Alex Swim, a Slim Jim for sophomore pitcher Jim Stokes and a stuffed elephant for freshman catcher Michael Elefante. He even has a “Thomas the Tank Engine” lunch box in homage to freshman shortstop Joey Tomko.

While not every opposing player or fan enjoys Roth’s antics, the athletes in maroon and gold love the support.

“He’s got me cracking up sometimes,” said senior left fielder Jake Luce, for whom Roth coined the nickname Abso-Luce. “He brings life to the ballpark, that’s for sure. We appreciate him.”

For Roth, going out to the ballpark means an escape from the monotony of everyday boredom. It’s a chance to get away for a couple hours — an opportunity to lose himself in the pageantry of America’s game.

“This is where I go to stress relieve,” Roth said. “A lot of people do their own thing or they go to the gym. I haven’t been to the gym in a while. Instead, I come here, I start screaming at people and I have a lot of fun.”