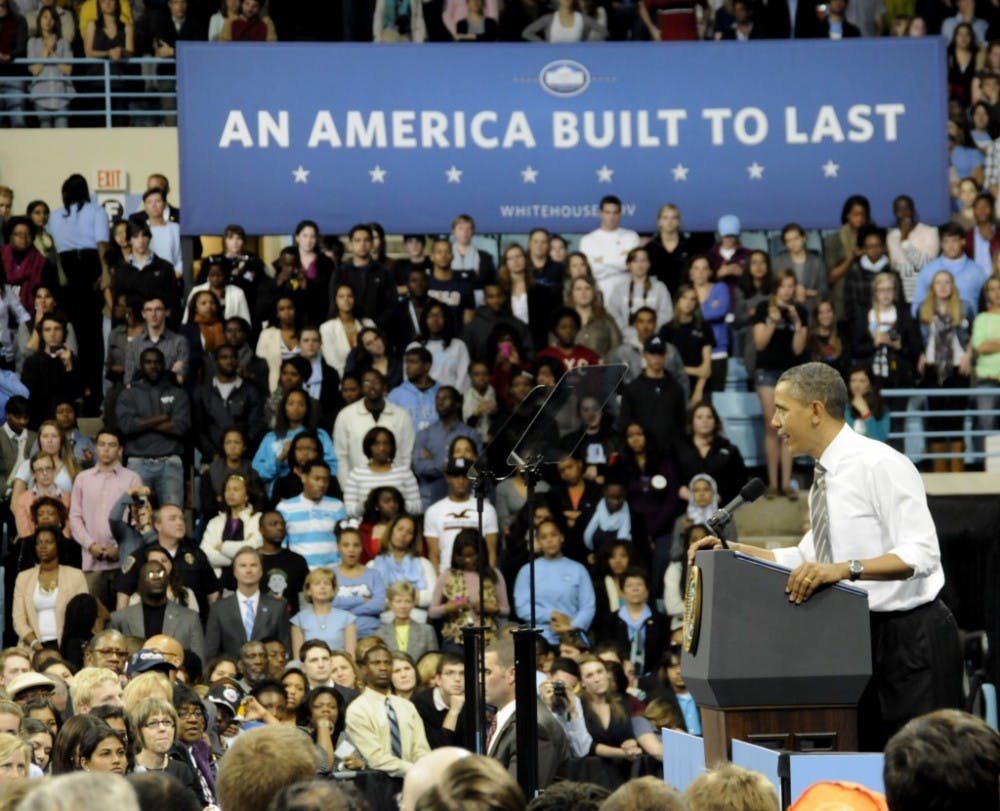 If Congress takes no action by the end of June, the interest rates on government-backed Stafford loans will double July 1. It’s a reality that millions of students face — and that many do not understand — but one that President Barack Obama said is not nearly a high enough priority on America’s agenda.

Obama spoke to an energetic and enthusiastic crowd of several thousand students Tuesday afternoon at the University of North Carolina at Chapel Hill. He discussed current issues facing those with increasing debt and also explained his own experiences with paying for school, sharing that both he and his wife, Michelle, shared a “mountain of debt” when they first married.

“We only finished paying off our student loans — check this out, I’m President of the United States — about eight years ago,” Obama said. “It wasn’t that long ago.”

But students today are struggling more than ever, Obama said, and since he’s been in their shoes, he said he is dedicated to solving the broken system, despite opposition.

Student loans and the rising cost of college degrees should not be a partisan issue and both Republicans and Democrats have made great strides for students in the past, Obama said. But he also quoted “a Republican congresswoman” who said she had “no respect for students who graduate with debt, because there’s no reason for that.”

Although Obama did not name her, the full quote comes from Congresswoman Virginia Foxx, R-N.C. He omitted her reference to students who graduate with more than $80,000 in loans without having worked to help pay for school.

The government can only do so much for students, though, Obama said. The federal government cannot continue to subsidize the skyrocketing cost of education, and must instead work on persuading colleges to keep costs down.

Obama referenced plans associated with the Race to the Top incentive program, offering a warning to institutions that cannot shrink their costs. The proposal rewards less expensive schools with more federal financial aid, and revokes aid from those schools that cannot lower costs.

Current college students are at major disadvantage compared to their parents, Obama said, because they’re entering the workforce with much more debt. He acknowledged that there’s still a great deal of work that needs to be done to liven up the economy, and said that investing in education by getting rid of subsidies for big oil and gas companies and the wealthiest Americans—including himself—is one of the best ways to do just that.

"We've got to make sure you're not saddled with debt before you even get started in life,” he said, adding that he doesn’t want students working two or three jobs just to get by.

Throughout Obama’s speech, student response was often so positive that he was drowned out, and even shouting into the microphone was not enough to overpower the cheers. Not surprising, though, as many students at UNC have student loans and find Obama’s speech to hit close to home.

[box]Obama on his own experiences with student loans and debt

Obama on how to save the student loan problem, without just subsidizing more money

“I think anyone with anyone with student loans should be interested in this cause,” said UNC graduate student Maggie Ellis. “I care about a lot of things, but student loans are something that I deal with every day. I’ll have to think about this probably for decades to come.”

UNC senior Katherine Bayard has dealt with loans all four years of college, she said, and they aren’t going away just yet as she plans to attend graduate school next year.

“It’s a daunting experience (having student loans), having to pay off that large of an amount of money with a large amount of interest when you don’t have any money to begin with,” she said. “I will have more loans going into grad school next year as well. But I would like to know a little bit more about what he’s planning to do exactly because I know that’s the main goal.”

One UNC junior, Everett Lozzi, said that he wants to know more about just that — he said that while Obama made many promises and discussed getting more funding into higher education, it is necessary to know where that money is coming from.

“I am not particularly supportive of his policies in the first place,” he said. “The one assumption he made was the tuition is going up but he never really explained why. His solution just seems to be to pump money into something without providing more supply, and that’s part of the reason why costs are going up. He doesn’t talk about where that money is coming from. If we aren’t paying as much in tuition then somebody is paying for it, and that’s a lost opportunity cost.”

Despite uncertainty in Obama’s full explanation, his emphasis was strong in that America needs to have a better, more affordable future for its students.

“I don't want this to be a country where a shrinking number of Americans are doing really, really well, and a growing number of Americans are struggling to get by,” Obama said. “That’s not my idea for America. I don’t want that future for you, I don’t want that future for my daughters. I want this, for everyone, to be a country where everybody gets a fair shot.”

For a full transcript of Obama's entire speech, click here.

[box]Obama asks for an Amen from the crowd