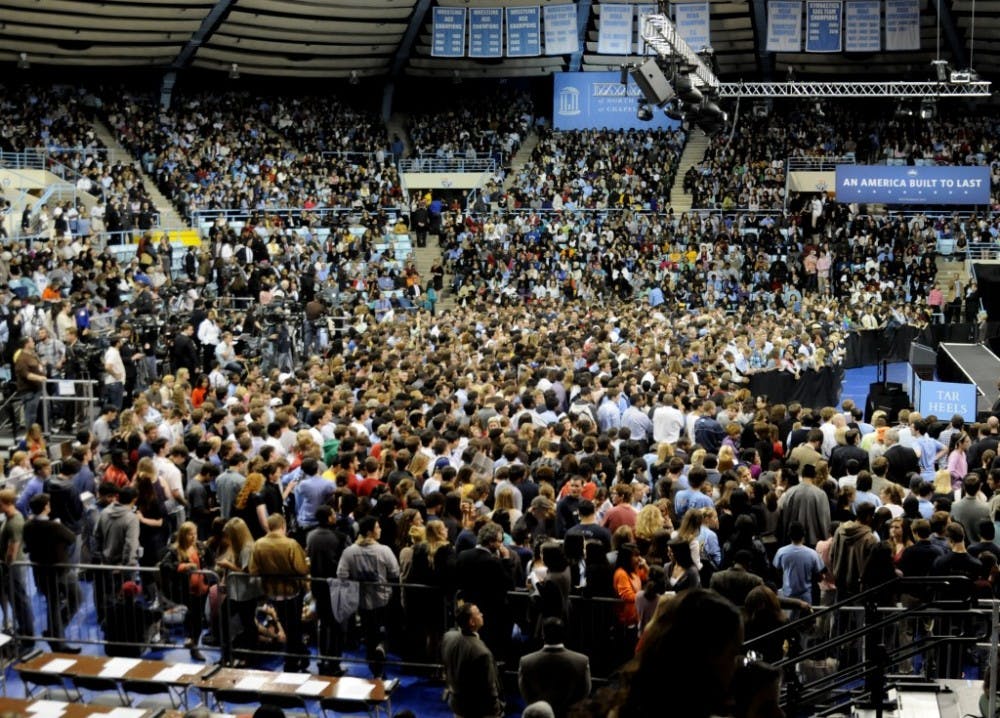 Follow @elonpendulum and @pendulumlive for the complete live coverage of Obama's speech.

In 2007, Congress passed a law that cut interest rates on popular federal loan programs for low- and middle-income undergraduates in universities across America. President Barack Obama is pushing for an extension of the law before it expires July 1.

If the law expires, rates on subsidized Stafford loans will double on July 1 from 3.4 percent to 6.8 percent, according to a report by WRAL.

“I actually have student loans,” said UNC Chapel Hill freshman Andrea Gonzalez. “I took out I think $6,000 in a year in Stafford loans which is what (Obama) is fighting for – to reduce the interest rates. I would really love to get out of college and not have a lot of debt so that I might be able to get into the work force. I think the youth is going to be the next level of the economy and if we all come in with a lot of debt, it’s just really going to mess everything up.”

In an earlier report, the White House said that it would cost 7 million students $1,000 or more to pay their loans. Obama called this a “tremendous blow” that is completely preventable.

[quote]I think that it’s going to take, especially from Washington, reevaluating how we’re using our money and putting emphasis on education and protecting the consumer. -Sam Robertson, UNC sophomore[/quote]

UNC sophomore Sam Robertson agrees and said that if America wants to stay competitive from a global standpoint that it’s going to have to make education more affordable for students of all financial backgrounds.

“I think that it’s going to take, especially from Washington, reevaluating how we’re using our money and putting emphasis on education and protecting the consumer,” she said, “which is purchasing an education, as opposed to corporations.”

Robertson said that she doesn’t have out student loans because she is fortunate enough to have a full ride, but both of her sisters are still paying back their loans from college.

“I know that both of my sisters have pretty tremendous debt and that it really affected what they chose to major in in college,” she said. “I’m fortunate to not have such a burden, but I know that it could have changed their life paths in the end.”

Students from both public and private universities alike have loans, including Elon University students. According to Kiplinger’s “Best-Value in Private Colleges” from 2011-2012, Elon was ranked 34th. The average need-based aid offered to students is $10,846 while the average non-need-based aid is $5,380.

At his speech at UNC Chapel Hill today, Obama will speak about interest rates on student loans in conjunction with his wish to extend the 2007 law.

UNC senior Tom Shane said he has a decent-paying job lined up for after graduation, but he has figured out that about one-eighth of his after-taxes budget will be consumed by his loan payments. Shane is an out-of-state student from Minnesota, and said he and others who are not offered lower in-state tuition are crushed especially by the weight of debt.

“This is how we bridge the gap,” he said. “With more student loans.”