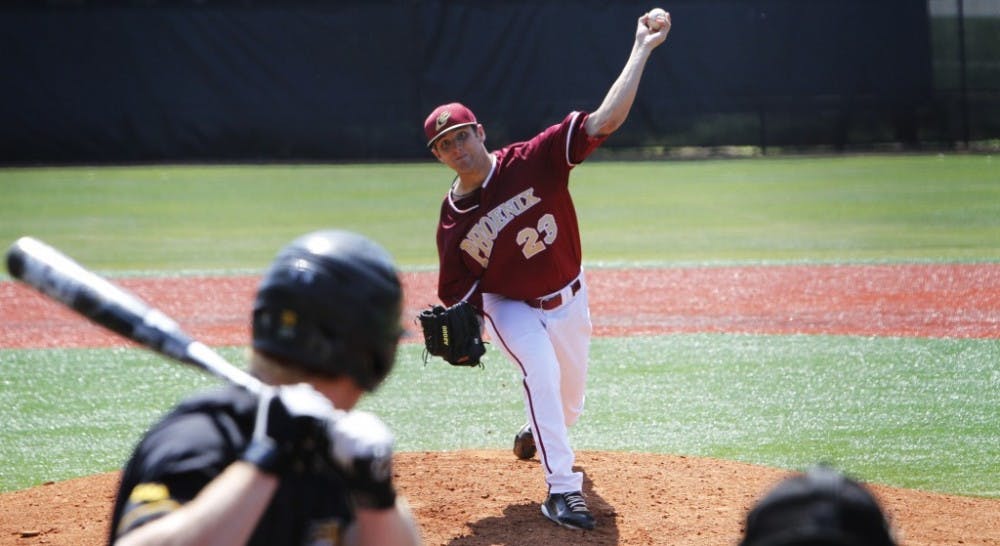 For Elon University freshman infielder Tyler McVicar, the 55 days between his first collegiate at-bat and Friday night’s game against Towson University could best be described as waiting for the proverbial opportune moment.

He saw the field sparingly in that time, serving mostly as a pinch hitter that had failed to hit. Then, a switch flipped on. McVicar deposited a 1-1 second inning pitch from Towson’s Sean Bertrand over the right field wall for his first collegiate home run. An inning later, he drove the first pitch he saw well over the fence in left center field — taking out his frustration  on back-to-back pitches.

The positive vibes continued on Sunday, when McVicar added a pair of hits and reached base four times in the series finale, a 6-2 Phoenix win that gave Elon (21-17, 12-6 Southern Conference) the series victory.

“It felt good because I was struggling big time,” McVicar said. “Nothing was going my way and then finally it came and I got some hits together. Hopefully I’m out of it.”

The wins halted a brutal stretch of five losses in six games, but there was still much to be desired. The Phoenix booted the ball around all weekend, making eight errors in the three-game series, seven during the last two games.

Adventurous defense has been a theme for the Phoenix this year. Elon has committed more errors (67) than any team in the SoCon.

“It’s always a concern and it’s got to be more important to our guys,” said head coach Mike Kennedy. “That’s the message we’re trying to hammer away. They’re all worried about hitting, hitting, hitting. Well, you know what, you can worry about that until you’re blue in the face but you’re not doing that real well right now. So we got to catch the ball to stay in games.”

The Phoenix will get to test its defense at home against High Point before heading on the road to face the team at the cellar of the SoCon, Wofford College. It’s an opportunity to correct what has been up to this point a subpar season by Elon standards.

“Personally, I don’t think 21-17 is where we want to be as a team,” said freshman outfielder Quinn Bower. “I think that we think we’re a lot better than that and our record doesn’t show. We have played tough competition, but we have to come away with wins.”

The fact that Wofford sits at the bottom of the conference doesn’t give Kennedy ease. He saw what happened when his team faced — and beat — top conference foes like Charleston and Georgia Southern.

But he was also there when the Phoenix dropped a pair of series to Furman University and Davidson College, two teams Elon had no business losing to.

“I think the mentality is to come out and play hard right from the start,” Kennedy said. “We try not to worry about who we’re playing. If you do, you get caught up in not showing up sometimes. It’s easy for kids to go ‘OK, Wofford’s 3-11 or 3-12, this is going to be easy.’ But it’s never easy.”

A key factor for the Phoenix may be the health of two key regulars. Junior center fielder Niko Fraser hasn’t played since becoming concussed at Furman April 6. It was the fifth documented concussion Fraser has suffered since high school. Kennedy said Fraser may play Wednesday against High Point and that returning Friday against Wofford is a realistic goal.

X-rays on senior utility player Garrett Koster’s elbow came back negative. Koster was hit by a pitch April 14 and did not play the following day. His status for the upcoming week is unknown.

But if he’s out, the Phoenix may need a breakthrough performance from an unsung hero to pull out a weekend series victory.

McVicar provided that for the Phoenix this past weekend as one of several freshmen making noise this year for Elon. The Bower twins are at the top — Blaine is batting .364 in 17 games and Quinn has eight RBIs to go along with a .254 batting average. Infiedler Joey Tomko has 13 hits and six RBIs, while fellow utility man Casey Jones has 7 RBIs in 18 starts. Redshirt freshman pitcher John Antonelli is second on the team with a 2.95 ERA and has two saves, second on the team.

With a key man down, Elon will need all hands on deck for the rest of the seaosn.

Baseball at a Glance