Elon students get paid to play 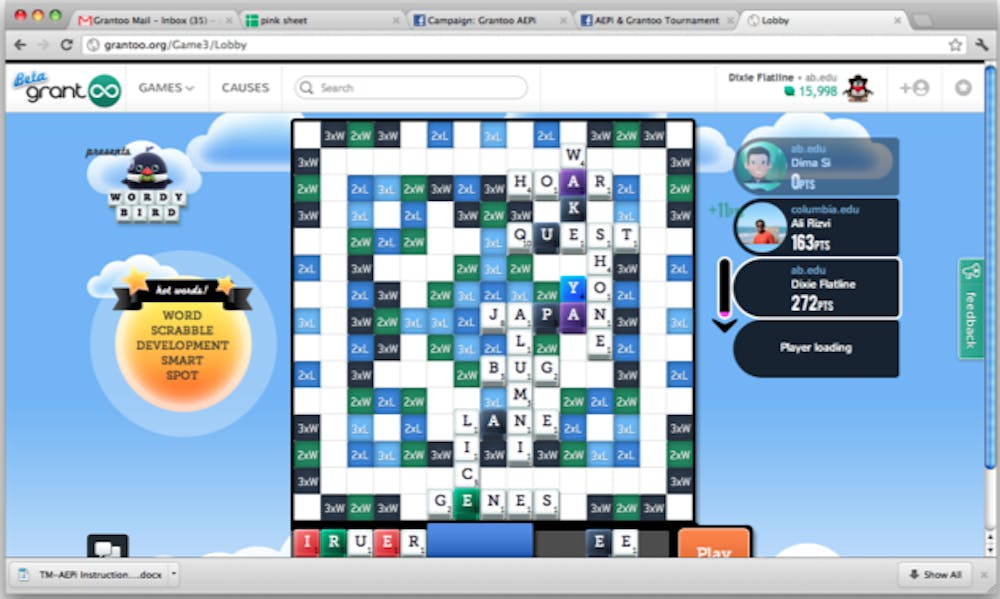 a social gaming community that gives college students the chance to win tuition money and donate to charity, recently opened its website to Elon University students.

Within the first week and a half of play, sophomores Taylor Pewitt and Katie Ryan each recieved the first place prize: a $1,000 scholarship.

Pewitt placed first out of 73 students in the April 8 tournament, and Ryan placed first April 15. Three other Elon students have placed in the top 7, all recieving at least $100.

Pewitt said practicing the Grantoo games with her friends helped prepare her for the tournament.

“My suitemates and I had played a few rounds during the week before, because it's a lot of fun even if you're not playing for money,” she said. “The game varies in difficulty, so I do a lot better in categories like pop culture than in categories such as international sports.”

Elon is one of 40 campuses that is part of Grantoo’s pilot program. The website does not open to the public until May.

“I feel like it’s the perfect opportunity for students to reduce their tuition costs while playing games, which they are probably already doing,” said Ali Obradovich, an Elon sophomore and Grantoo intern. “And it’s a way to increase the reach of your philanthropy.”

The premise is simple. Students sign up to participate in a tournament and compete against other students in one of three games. Before the tournament begins, students will pledge a percentage of their winnings toward a charity of their choice. The eight players with the highest scores receive money from the prize pool, and each finalists’ winnings will be divided based on how much they pledged to receive in scholarship grants and how much they chose to give to charity.

Before the tournaments begin, students can log into the website using their Elon email address and play the games to collect Tookens, Grantoo’s version of tokens.

The three games are Quiz Night, a trivia game; Wordy Birdy, a mix of Scrabble and Uno; and Grantoo Hold ‘Em, which is similar to Texas Hold ‘Em.

“It doesn’t take long to get into the games, and they’re very easy to play,” said sophomore Kristen Kibby. “I think students should get involved with this because there’s nothing to lose, and I think everyone could use some money for school.”

The tournaments are sponsored by companies that use Grantoo’s website to increase the visibility of their donations. The logo of the company that sponsors the tournament appears in the back of the play screen, and relevant words are incorporated into the games.

“If a (coffee company) hosts a tournament for us, and (in Wordy Birdy), say you use a word like ‘latte,’ you get extra points,” Obradovich said. “It allows the company to advertise and allows them to help pay off tuition costs.”

As the site progresses, more prizes will be incorporated into the games, Obradovich said.  If a player uses a long, complicated word in Wordy Birdy, for example, he or she could win a prize such as free ice cream from a national ice cream vendor.

In an effort to increase its reach and draw people towards the site, Grantoo has launched a social media campaign, primarily on Facebook and Twitter. This could help students who might otherwise not remember to sign up, Kibby said.

“I think some students might not get involved because they could forget about it,” Kibby said. “I think having it on Facebook and Twitter is good, because when students procrastinate on these sites, they can see Grantoo and decide to check it out.”

But Grantoo made a smart decision in choosing Elon to participate in the pilot program, Kibby said.

“I think it can be successful on Elon’s campus because of the smart and involved population of students,” she said.

Editor's note: This story has been updated to include interviews with Grantoo winners.