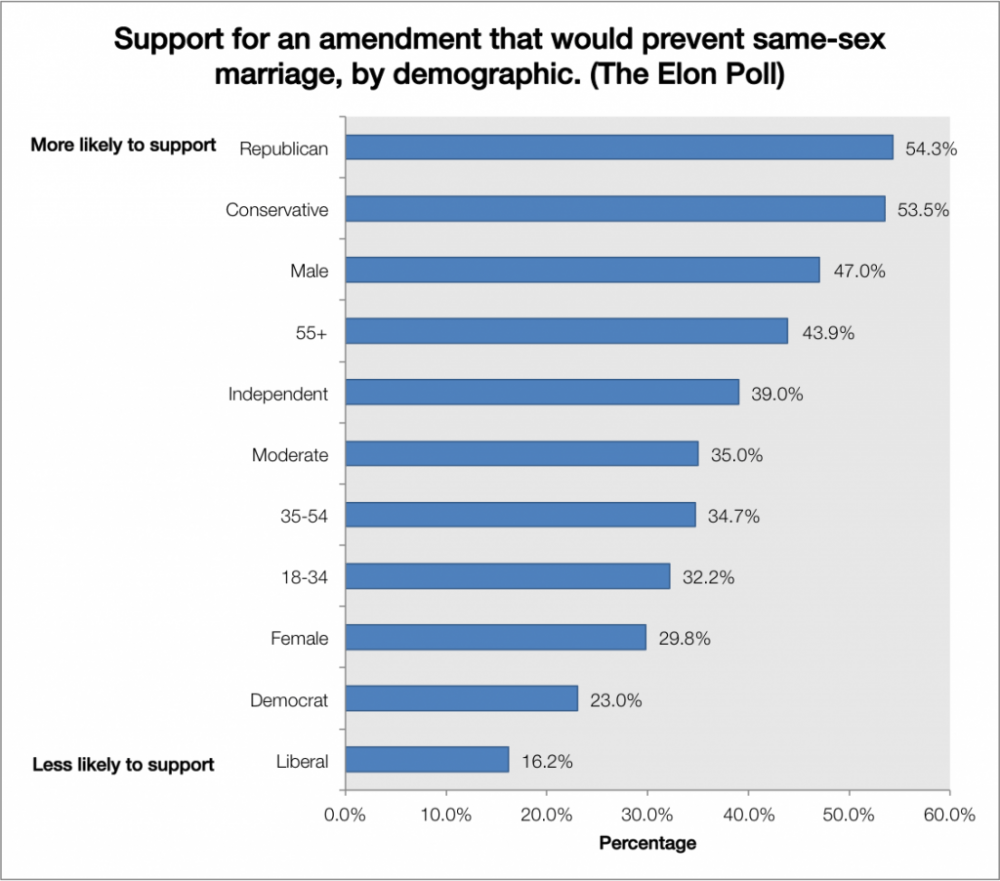 The results from the most recent Elon Poll reveal that North Carolinians have an increasingly favorable opinion of President Barack Obama and are more optimistic about the national economy.

Of the 605 adults that took the survey, 28.5 percent said they approved of the way Obama is handling his job as president, while only 22.9 percent felt the same in November. Similar questions, including how Obama is handling the economy, revealed a similar pattern.

“The improvement of President Obama’s favorable ratings is worth noting,” said John Robinson, director of communications for the Elon Poll. “He’s upside down in the sense that his unfavorables are still higher than his favorables, but that gap is narrowing.”

The increase in Obama’s approval rate is directly related to the improvement of the economy and to the way the Republican presidential candidates are campaigning, Robinson said.

“People associate the economy’s health, good or bad, with whoever the president is,” Robinson said. “People have watched the Republican candidates criticize each other in 20 different debates and campaign stops. They are criticizing each other rather than criticizing the president, and people feel better about (Obama) because he isn’t getting bashed by them.”

Choosing to have the Democratic convention in Charlotte was a strategic decision because of the influence North Carolina will have in the 2012 election, said Mileah Kromer, assistant director of the Elon poll.

Robinson also acknowledged the strategy behind the location of the convention and the significant role North Carolina will play in the presidential election.

In a separate survey topic, more North Carolinians responded that they expect the national economy to get better by the end of the year than they did in September.  They also feel more positive about their personal financial situation than they did in September, although the results show that, looking ahead, they are slightly less optimistic that their situation will improve.  Robinson said although people see improvement in the national economy, it takes some time before they may personally feel the benefits.

“There’s a trickle down effect with the economy,” he said. “Nationally, they see the economy is getting better. In terms of their pocket book, not so much.  There’s a lag time between the national economy and when you actually see a raise in your paycheck.”

And although the results showed the sentiment regarding Obama and the national government is improved, positive opinions regarding the state legislature in Raleigh have declined. In March 2011, 31.9 percent of respondents said they approve of the state legislature, while only 24.5 percent responded the same way in the most recent poll.

“I thought it was interesting that the state legislature got low marks from people,” Robinson said. “And I think that’s for the first time in years, the Republicans control both houses in the general assembly. And they came in and decided they were going to change things, and they did, and change is uncomfortable for people.”

North Carolinians were also asked to respond to questions regarding same-sex marriage.  The results show that less people oppose legal recognition for same sex couples than in the past three polls, and more people support full marriage rights for same sex couples. Opposition to the amendment to the North Carolina constitution that would prevent same sex marriages has also increased.

Although results concerning same sex marriage were of particular surprise to Robinson, he said they have little or no connection to how people will vote or who will turn out to vote in the May election.

“We survey residents in North Carolina, not likely voters,” he said. “If there are still (three or four) candidates for Republican nomination by the time the primary rolls around in North Carolina, more Republicans will turn out to vote for their favorite presidential candidate.  There isn’t a reason for a whole lot of moderates and liberals to turn out other than to vote against the same sex marriage ban. So, maybe a whole lot of the conservatives will turn out and vote for the ban.”

Considering the demographics of the respondents also reveals interesting trends in the survey results.  In all three same sex marriage questions, there was a significant divide between male and females in how they responded.  Only 28.4 percent of males said they support full marriage rights for same sex couples, compared to 42.2 percent of women.

“Men are very much opposed to same sex marriage in terms of legalities, and they definitely don’t want full marriage rights,” Robinson said. “As a man myself, that personally surprised me that the difference between the female view of it and the male view of it was so stark.”

In all four questions related to Obama, females answered more positively than males. Only 40.6 percent of males said they have a favorable opinion of Obama, compared 53.4 percent of women.  This is a consistent trend with what’s been seen in the past, Kromer said.

“Women identify with Democratic candidates more than their male counterparts, so the gender gap we see is really unsurprising and consistent with what we see nationwide and historically,” she said.

Residents were also asked what they consider to be the most important issue facing the state, to which more than half answered the economy. The economy was also considered the most important political and social issue facing North Carolinians, with education coming in a close second. Out of a list of common fears, North Carolinians are most fearful of losing their retirement fund and are more concerned about the price of gas than other concerns regarding economic conditions.