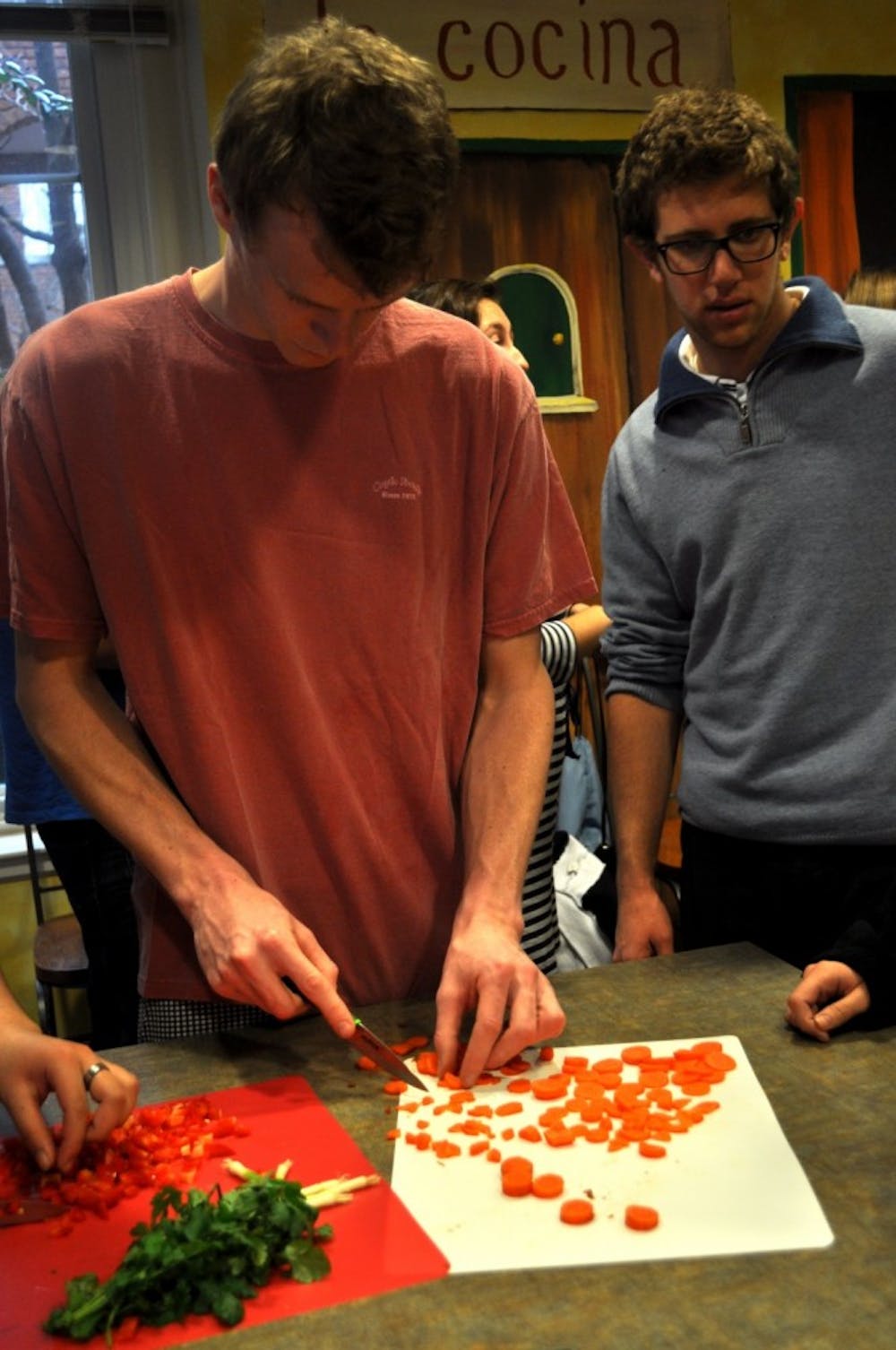 When first-time participants attend a cooking class at El Centro, they learn a little-known Elon secret — students don’t have to go abroad to taste authentic Hispanic cuisine. Tasty, Latin-inspired dishes are being served up right under their noses in El Centro, Elon’s Spanish center.

El Centro offers opportunities for students to improve their Spanish-speaking skills and experience the culture through hands-on events, conversational classes and community service.  One of the most popular events is the cooking class, held once a semester in El Centro’s kitchen.

Each class is inspired by cuisine from a Spanish-speaking country and the leaders of the class rotate depending on the menu. Members of the El Centro staff often lead the class, but students sometimes take on the responsibility and community members have even come to share their love of cooking, according to Sylvia Munoz, director of El Centro.

“What we try to do is split up depending on what kind of food we’re going to cook,” Munoz said. “There are students who do stuff from their own countries — Mexico, Spain, Costa Rica, etc.”

Members from the Elon and Burlington community also share their tasty specialties, Munoz said. Spanish proficiency is by no means a requirement to attend the class — students whose language skills are limited to ‘hola’ often end up chopping onions next to native Spanish speakers.  Munoz said she hopes that all students, no matter their skill level, leave not only with a full stomach and an easy-to-follow recipe, but also with further knowledge about Spanish language and culture.

“It’s a Spanish center, but we also understand that a lot of the people that sign up may not necessarily have a high level of Spanish,” Munoz said. “We try to do it both in English and Spanish, and hopefully they will learn a little bit of Spanish while they are here.”

Senior Alex Schreiner attended the most recent cooking class March 8, where the menu featured arroz con pollo, or rice with chicken, and dulce de leche cupcakes.  Schreiner, who is working towards a Spanish minor, said he signed up for the class because of his love for cooking and his familiarity with El Centro.

“I’ve been to El Centro plenty of times, but this is my first cooking thing,” he said. “I love cooking and learning how to cook things from other countries. I’m on the email list, and I just got excited when I saw (the menu) and I was like, ‘I want to learn how to make chicken and rice.'”

Although arroz con pollo is prepared differently in every country, Munoz said she taught the students the Costa Rican version of the popular dish in honor of her native country.

“The important thing is that we all pretty much use the same ingredients in every dish,” she said. “You all like chicken, you all eat rice — it’s just to learn that you can make them in different ways and have different flavors. In Costa Rica, we do it with veggies, like carrots and green beans and peppers.”

Sophomore Brigitte Olavarria, who spent the first part of the class chopping vegetables for the meal, said the dish is popular at her dinner table, and she was interested to see if Elon students could create a dish as good as her mother’s.

“My mom is from Ecuador and my dad is from Puerto Rico, but my mom does all the cooking,” she said. “She’ll cook Ecuadorian food and Puerto Rican food. We eat a lot of rice and chicken. She makes it pretty much every week, and it’s one of my favorite dishes.”

Olavarria said another reason she signed up for the class was to gain more hours towards her free plane ticket. Students who log 140 hours in El Centro over a span of two years receive a plane ticket to a Spanish-speaking country of their choice.

Students are encouraged to come to El Centro because of the variety of immersion programs offered, according to Raquel Cortes Mazuelas, assistant director of El Centro.

“We want to teach culture through language immersion and language through cultural immersion,” she said. “Most things that we do are around food because food is very important to our culture, and every time we have food, we have a lot of people.”

And Schreiner was confident that with 20 people present at the class — five more than the usual limit — the food would turn out pretty tasty.

“I’m a big believer that making something at home is a more rewarding   experience than going to a restaurant,” he said. “I think between the 20 people that signed up for the class, we can put something delicious together.”