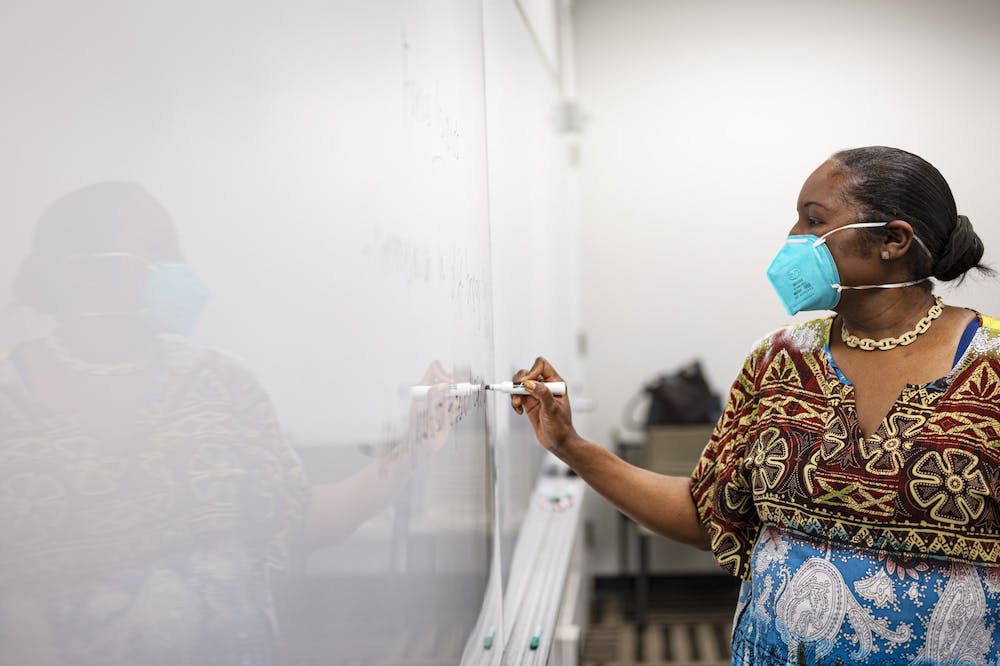 Photo by Luke Johnson | Elon News Network
English professor Prudence Layne writes on the board during her African American Literature Since 1945 on Feb. 10

A professor, a woman and an immigrant.

Those three intersecting identities allow English professor Prudence Layne to tell her life story and teach African American studies at Elon University. Layne’s 22 years teaching at Elon have taught her many things, but if there is anything that has stood out, it’s that education surrounding African American and Black history is overlooked.

“There is a kind of fairytale construction of the story of Black history,” Layne said. “It’s a story and a narrative that a lot of people don’t know.”

Layne said she is often asked the question, “Why is it African and African American?” when students are referring to different types of studies. Questions like these can sometimes lead to discrepancies in the U.S. education system. Throughout her time at Elon, Layne said she has seen firsthand how the education system has disregarded the importance of African American literature and history.

Her background — originally from the Caribbean but grew up living between the United States, Faroe Islands of Denmark and Barbados, Layne said she had a diverse education during her secondary and higher education years. Her experiences of living in different communities allow her to have a greater understanding of diversity — something she brings to Elon.

“I felt empowered to talk about race,” Layne said. “We make sure that we don’t talk about these as difficult conversations, it’s like riding a bike — it’s only hard when you aren’t practiced.”

Layne often encounters students at the university who have little-to-no background in either African American studies or history, primarily because many of their K-12 education systems relegated the study of those histories. A major example of this is when a North Carolina school district banned critical race theory from its classrooms in 2021.

Unlike Layne, associate professor of education at Elon’s School of Education Lisa Buchanan did not experience diversity in her education.

“Prior to graduate school, I had a largely incomplete knowledge of African American history,” Buchanan wrote in an email to Elon News Network. “What I did know was things about Black history, rather than learning about the world around me through Black history.”

Buchanan wrote that African American history is often taught about rather than taught through. She has seen elements of history censored in the general education system, which is why many students at Elon and other institutions have a lack of prior knowledge about America’s history.

Both Layne and Buchanan believe that the collegiate and K-12 education systems fail to teach important details about American history that have a connection to African American history or culture. According to Layne, there are differences between each of the African American cultures, and there are different fields of study for each culture. She said these subjects should be taught individually, but instead they have been intertwined with each other.

An observation Layne quickly made when she started teaching was that learning about new perspectives is important — early in her career, Layne said she could feel she was “pushing against the tide” when teaching some students. She felt like she didn’t have a universal set of open minds to teach to. Layne asks her students to look at their own privileges and experiences as a source of empowerment to make a difference.

Critical race theory and African American studies have made headlines in recent years about placing regulations on teaching Black history in some states. Critical race theory is a cross-disciplinary examination of race and law in the United States. It’s a way of understanding how American racism has shaped public policy. In North Carolina, the teaching of critical race theory has led to a debate on what racial concepts can be discussed in the classroom.

North Carolina House Bill 324 — which was designed to ban any teaching of critical race theory — was passed in September 2021 but has since been vetoed, was one recent reason why some teachers struggled to teach African American studies due to limitations in education.

Layne said that although Elon University is a private institution and has different teaching regulations than public universities, professors can still face challenges in teaching a diverse curriculum.

“There are lots of teachers who feel like their hands are tied,” Layne said. “They don’t teach critical race theory, but they want to be able to talk about the experiences of all of their students, not just any in particular. And so they feel censored … There are real effects about how and what they teach.”

The shift in the approach to diversity education might be the solution for censorship issues such as building into the educational process to foster an inclusive environment, according to Layne. By aiming for inclusivity and representation, students can reach a clearer understanding of African American and Black history.

“We need to expose our students to diverse perspectives from really early and young,” Layne said. “That's how empathy, inclusion and acceptance happens.”