Colorado water shortage is a first, but not the last

As record temperatures are recorded in the US and globally, concerns about water insecurity in Southwest, Midwest and South continue 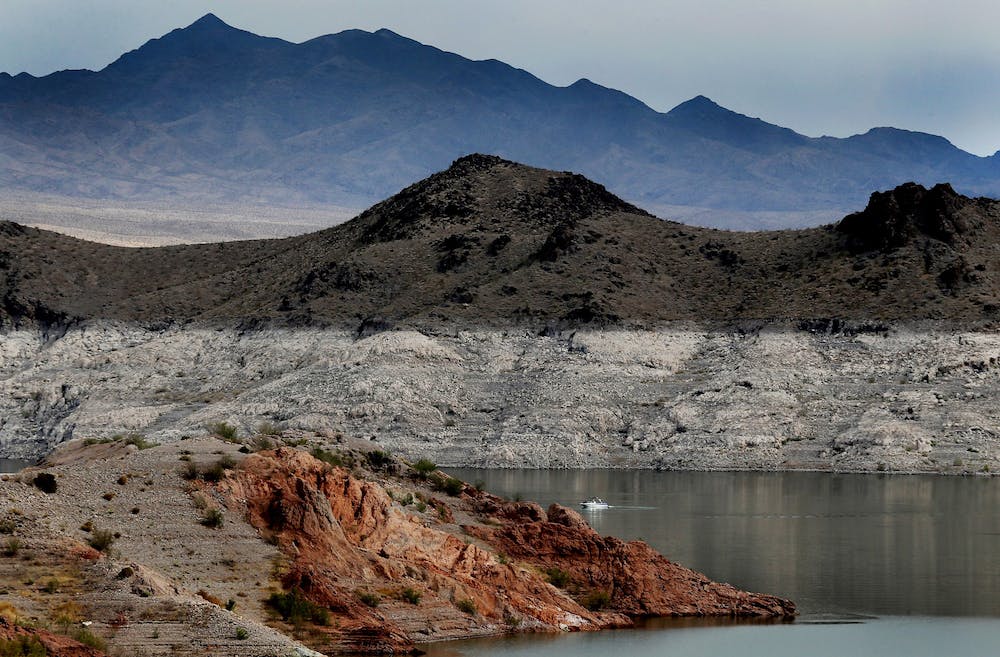 A boat navigates Lake Mead, where a white "bathtub ring" along the shore shows how far below capacity the nation's largest reservoir is on April 1, 2021. Water levels at Lake Mead hit their lowest point in history amid an ongoing megadrought, creating uncertainty about the water supply for millions in the Western U.S. (Luis Sinco/Los Angeles Times/TNS)

As news broke that the United States government declared its first water shortage on the Colorado River, Drew Ball felt frustrated, disheartened and sad — but not surprised.

“We’ve known that they were in a precarious situation and climate change has really added to that,” Ball said. “It’s something we’ve known could happen for a while.”

What’s happening in the Southwest

The federal government declared the first water shortage on the Colorado river on Aug. 16, announcing mandatory water cutbacks next year. The declaration by the U.S. Bureau of Reclamation was triggered by the decline of Lake Mead, a reservoir near Las Vegas which stores freshwater used by Arizona, Nevada, California and Mexico.

The reservoir dropped to its lowest levels since the Hoover Dam was built in the 1930s, standing at 35% capacity currently. The first shortage declaration shows the severity of the drought and impact of climate change on the river, according to federal water managers. The river provides water for nearly 40 million people.

“It’s no coincidence that the first time that Colorado is experiencing a drought at this level, at the same time we’ve had the highest global temperature for July,” Ball said. “It links up, it’s scary, it’s undeniable.”

Adding to the strain brought on by the drought is population increase, one reason water shortages can occur. The population of Arizona has also increased: In 2010, the US Census Bureau estimated Arizona’s population to be 6,392,017 people. Now, the state has over 7,151,500 people.

The Earth’s surface is over two-thirds water, but less than three percent of that water is freshwater. Freshwater is used for many purposes, from drinking water and laundry to agriculture, industrial needs, recreation and thermoelectricity.

Increasing global temperatures, decreased precipitation and increase in water demand all impact the amount of freshwater available. According to Earth’s Future, a research article published by Advancing Earth and Space Science, nearly 204 watersheds in the United States could experience water shortages during the 21st century, some within the remainder of the year.

“Areas that are typically very lush are becoming barren and we can see it before our eyes and the data is telling us it’s getting worse,” Ball said.

""We can do it, and we honestly have to do it ... It's time for leaders to step up and make the tough decisions that they have to make to save the planet — to save us."

“The Midwest, the Southwest and the South really are going to be experiencing some pretty extreme global weirding as temperature increases,” Ball said. “We have the risk of losing freshwater to encroaching sea level rise.”

North Carolina faces many of the same challenges as the Southwest — a growing population, higher temperatures — but also faces individual, state specific challenges. North Carolina had major drought conditions in 1998 through 2002, resulting in widespread record-low streamflow and ground- water levels in many areas. More than 200 municipalities throughout the state operated under some form of voluntary, mandatory or emergency water conservation.

“The United States government’s reports have shown that places like Raleigh to the Piedmont region are going to get much hotter,” Ball said. “Climate change compounds a lot of these things.”

The hog industry, the impact of agriculture and PFAS, or polyfluoroalkyl substances, contamination also impact North Carolina. Pollution from emerging chemicals, specifically PFAS, impacts the Haw River and the residents of nearby Pittsboro, just 35 miles away from Elon’s campus.

“There have been elevated levels found in Pittsboro, Chatham County and the Triad,” Ball said. “What’s really sad is we don’t always fully understand where those are coming from.”

When it comes to water conservation, there are some “common sense water conservation” techniques individuals can do. Watering lawns with water collected by rain barrels, at night to beat evaporation or for shorter periods of time, and using low-flow toilets and shower heads, are just some of Ball’s suggestions.

But individual water conservation is not enough, Ball said.

“Individuals can’t get there on our own. It can go a very long way if you do your part as a global citizen when you are thoughtful about how you use things like water,” Ball said. “But at the end of the day, to protect everyone, sometimes we need laws in place that require that everybody play by the same rules ... to ensure that things like clean water are there for future generations.”

Buildings constructed with low-flow, smart water technology from the beginning are the best way to put water conservation into infrastructure, Ball said, rather than replacing structures after the fact.

“We can do it, and we honestly have to do it,” Ball said. “It’s time for leaders to step up and make the tough decisions that they have to make to save the planet — to save us.”