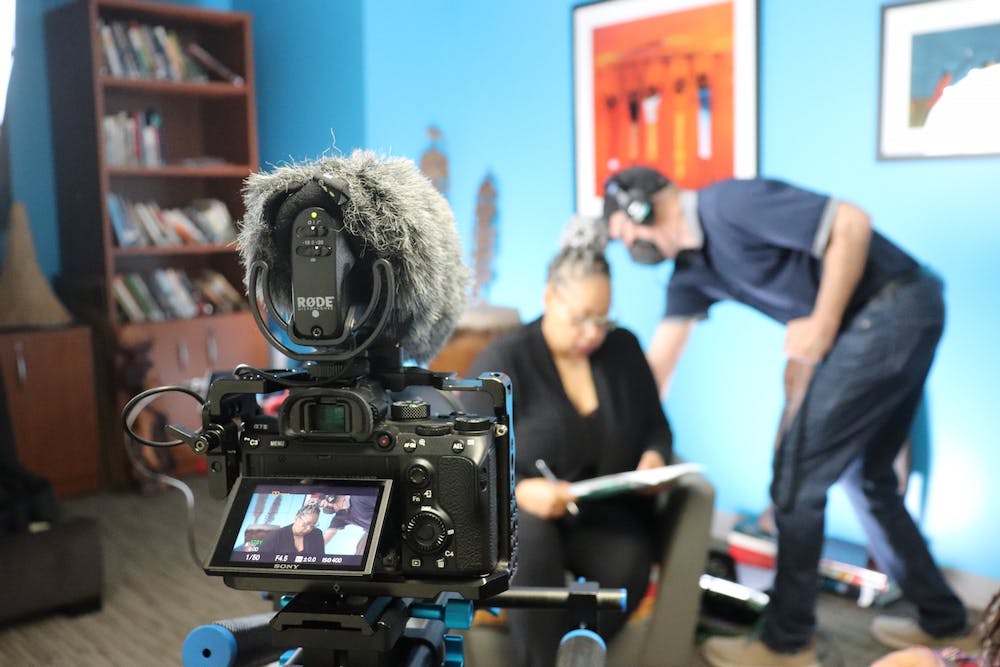 
The “Unlearn” documentary team interviews Rev. Donna Vanhook ‘07 on her experience with racism in the Black Community Room in Moseley Center.

Toni Autry was seven years old in 1992 when she realized that the color of skin would be an issue for her as a resident in Alamance County. She was uninvited from her friend’s birthday party because she was Black. Fast forward to 2021, and the issue of her skin color still exists.

In the wake of George Floyd’s murder by a white police officer last May, Autry used her social media platforms to create the film “Unlearn: The Consequences of Racism.” In partnership with co-director Martin Buchanan and producer Alex Klein, the film aims to capture the fight for racial justice in Alamance County through interviews with county residents and activists.

“We are trying to show through human experience that racism does exist, and that it can be unlearned because what you are taught is not true, and what you are doing is affecting other humans,” Autry said. “It took a man being murdered by police officers on national television to make people open up their eyes and see that Black people are not just speaking out of nowhere. There’s a blatant difference in how Black people are treated by the police.”

A string of local and national incidents following Floyd’s murder are also connected to the creation of the short film, according to Autry. These occurrences include months of protests and rallies in front of the Graham Confederate monument, the riot at the U.S. Capitol on Jan. 6 and fatal police shootings involving Black people like Andrew Brown Jr., who was shot by a deputy sheriff in Elizabeth City, North Carolina on April 21.

"It took a man being murdered by police officers on national television to make people open up their eyes and see that Black people are not just speaking out of nowhere. There's a blatant difference in how Black people are treated by the police."

Co-director of the film "Unlearn: The Consequences of Racism"

Autry and her team’s initial plan for the documentary was to create a short video that would then be shared to social media platforms. But as more local residents began to speak up about the racial issues they experienced in Alamance County since childhood, the interviews began to shape into a longform documentary. The film crew realized that not only did racism go unrecognized in the area, but that some local stories were never told.

“We knew we had to keep going, and it wasn’t just going to be something we would throw on Facebook. There are some deep issues as we targeted people around where I’m from,” Autry said. “All of these things lead up to this underlying racism that has been in this specific space, in this small town mentality, that really takes over.”

Interviews in the documentary had to keep up with the numerous incidents in North Carolina and the nation of racial injustice where Black people were the victims.

“Things keep happening at a rapid pace in our society,” Burnett said. “Some people would prefer that we be quiet about it, and I think they think that if we are quiet about it, it will eventually go away. But we’ve been quiet about it for a long time in Alamance County, and it’s not going anywhere. It’s still very much here.”

Burnett attended middle and high school in Graham with Autry and said she saw similar systemic issues growing up in the county.

“I saw things from ninth to 12th grade that I thought had long since dissipated,” Burnett said. “I didn’t think that this was still around. You would think, 2021, it’s over, but any given day anywhere, they’re having a whole rally moment in the [Confederate monument] corner. I’m 35 now, and you guys are still doing this. This is still happening. This is crazy to me because it has never stopped.”

Through each interview and every story told, Autry hopes the personal experiences shared will raise awareness that racism can be unlearned.

“The interviews are very candid,” Autry said. “They’re not rehearsed, they’re not scripted. It’s just a conversation. I want them to share what first comes to mind. If you want to have a film showing human emotion and want people to know it’s based on human experience, then you have to show their raw emotion and give the space for the world to be able to see truly how racism affects people.”

The filming of “Unlearn” also recognizes that visually capturing the racial injustices occurring today are just as important vocally telling stories throughout the county.

Anthony Crider, professor of astrophysics at Elon, has been photographing protests since 2017. Many of the photos Crider has taken have been used in the production of “Unlearn.” In his photojournalist career, he has attended and photographed around 70 Graham protests. Behind each protest photo, he said, there is a story to tell.

Crider and his wife Megan Squire, professor of computer science at Elon, were photographing demonstrators at the Confederate monument in Graham on June 21, 2020, when both of them were assaulted by two supporters of the monument. Crider said his photos document what happens at protests in Alamance County and other states.

“There are huge disagreements in our country. There’s a lot of racism built into it, [and] into the county as well,” Crider said. “It’s difficult, but through shooting these photos, especially the close-ups, they’re all human. Trying to understand why people are doing what they are doing is helpful, and photography can get you a part way there.”

Sophomore Nyjah Rollins grew up in Elon where she said she has experienced multiple accounts of racism as a Black woman.

“One time when I was walking through Elon when I was in high school, some trucks drove by and yelled mean things to me, like racial slurs,” Rollins said. “In history books, we’re not taught the actual history… By not knowing the whole history of what Black people in America have gone through, it enables racism.”

Rollins said the incidents that have happened in the Graham in the past can be difficult to understand when trying to view the opinions in support of the Confederate monument.

“It’s just insane that the statue is still there after all of the protests,” Rollins said. “I try to understand the other side, and it’s their heritage and history, but it’s also our history too where bad things were happening to Black people because of something you all are idolizing.”

While “Unlearn” focuses on the issues in Alamance County, sophomore Raheem Murphy, a resident from Guilford County, recognized these racial issues in the area a couple towns over. He grew up in North Philadelphia and said he did not recognize the color of his skin could potentially cause problems for him until he moved to North Carolina. Murphy said that racism is taught and it’s something that people can become aware of.

“There is an issue,” Murphy said. “I’m not sure how to fix it, but there definitely is an issue, not only in Alamance County, but in a lot of counties in North Carolina. There’s widespread problems throughout the state.”

"We're trying to get people to change history in the sense of their head, change what they have been taught and be an empathetic person that can contribute to society in a way that won't hurt people."

Co-director of the film "Unlearn: The Consequences of Racism

“Unlearn” recognizes the removal of Confederate statues in other parts of the south, such as the Jefferson Davis statue in Richmond, Virginia, the John C. Calhoun statue in Charleston, South Carolina and the Robert E. Lee Monument in New Orleans, to juxtapose the preservation of Graham’s monument. The documentary also discusses the history of Wyatt Outlaw, a Black councilman in Graham who was lynched by members of the White Brotherhood, a Ku Klux Klan-like organization, in 1870 at the site where the Confederate monument would be erected.

“We’re trying to get people to change history in the sense of their head, change what they have been taught and be an empathetic person that can contribute to society in a way that won’t hurt people,” Autry said.

The team plans on finishing and releasing the film by the end of 2021. As they continue to find local and national stories to tell, Autry said the main message at the end is for the audience is to understand that racism can be unlearned when said stories are heard.

“So often when we talk about racism the conversation just stops with the problem,” Burnett said. “I think it’s because we don’t always know the solution, but that doesn’t mean that we can’t still be hopeful and solution based in all of these conversations. I know that the documentary is a lot, and I know that seeing it in one sitting can take you to a place you’re not ready for, but at the end of it, there’s still hope.”