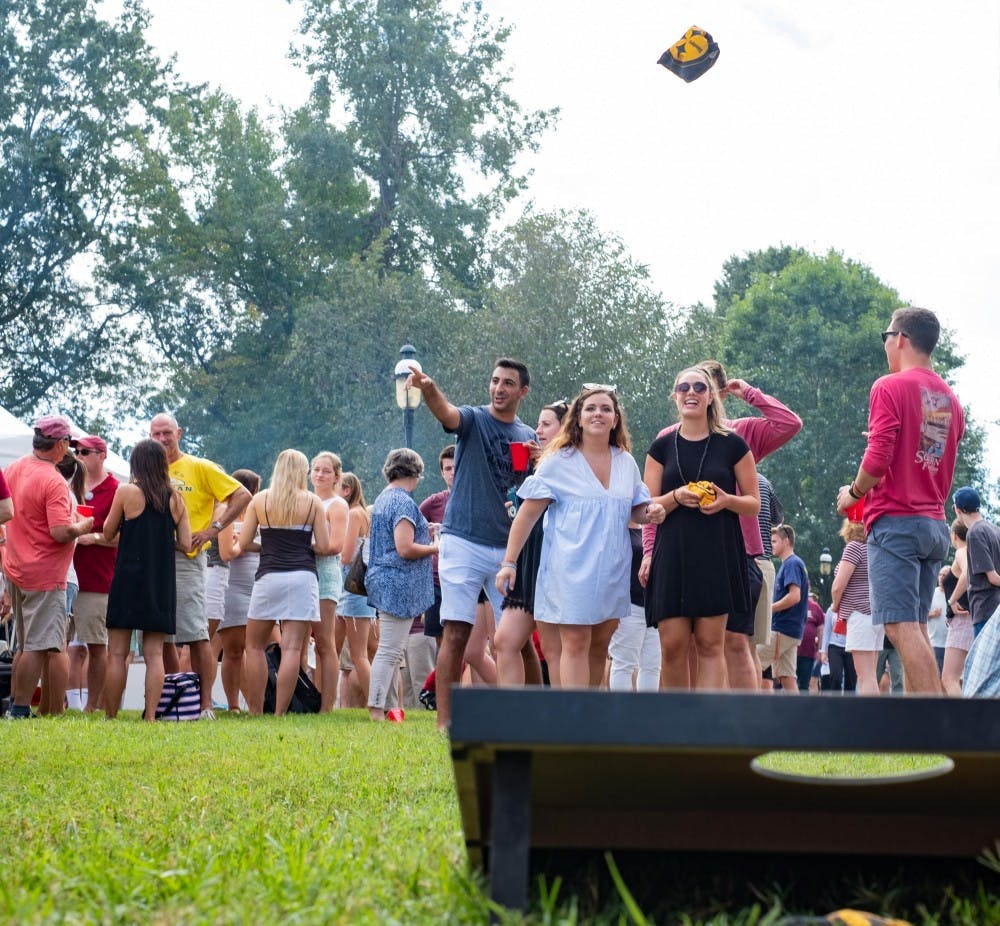 As students funneled down Bank of America Drive toward Rhodes Stadium on game day, they were greeted with white tents lining the sidewalk, live music and free food. This was the Elon University student tailgate.

Elon has been trying to create a newly revitalized sense of community through tailgating home football games this year. The team’s success over the past two years has drawn more spectators than in previous years, but there is still a desire for more students to come out and pack the pavement that leads to the gates of Elon’s home turf. At the forefront of this push is the SGA.

Executive secretary of the SGA, junior Jack Johnson, said there is a lot more that goes into planning a tailgate than meets the eye.

“It’s a whole coordination between the Student Government Association, Jake Young with the Phoenix Phanatics, Don Scott with the marketing department of the athletics department, and then Jenny Ciesiulka, Janis Baughman and Jordan King from Student Involvement. All of these people came together and made [the tailgate],” Johnson said.

The Phoenix Phanatics, headed by President Jake Young, describe themselves as the premiere student spirit group on campus. They are at most games cheering on the Phoenix and jeering the opponents.

Young was inspired to bring this spirit to college by his experiences in high school. He went to a sports-crazed school where if you weren’t an athlete, you were in the stands cheering on your fellow classmates. He detailed a “storming the pool” incident, where after a swim meet, the entire student section took a dip with the swim team.

Another push for him was his high school executing a “silent night.” This involved the entire student section remaining quiet until the 10th point was scored in a basketball game. Then, the entire gymnasium erupted in raucous pandemonium, as if the team had won a state title. Young says he has been trying to work with University Athletics to institute events like this to try and further entice students to come support Elon’s teams.

“I came from a high school with a lot of spirit, and I came to Elon and I realized there wasn’t a lot of school spirit,” Young said. “I really wanted to rejuvenate it.”

Organizations are the backbone of the tailgating experience for students. With a very involved campus, it was important to the people that put this all together to have the opportunity to invite groups to come out and socialize.

Though fraternities and sororities come to mind when thinking of social organizations, Johnson stressed that it is more than Fraternity and Sorority Life that contributes to the tailgating experience.

“We worked with all organizations for this, not just the fraternities and sororities,” Johnson said. “But they have been an integral part of this.”

The coordinators wanted to make sure students who are not involved in an organization had a place to go and felt included in game day activities. The One Phoenix Zone was set up to give students, specifically freshmen, a place where they did not need to belong to an organization to enjoy the tailgate. Replete with Chick-fil-A, drinks and snacks, the One Phoenix Zone is the spot for anyone looking for a good time on game day.

“This year we’re trying to expand and make sure everyone feels involved and included, especially on the SGA and Phoenix Phanatics side having the One Phoenix Zone. That way students who aren’t involved with any organization can come, get some free food, mingle and hang out,” said Kenneth Brown Jr., the student body president.

With a winning football team, food, games and a fun, inclusive environment, it would be natural to question why more people don’t show up to the tailgates. Johnson and Young acknowledged alternative events that happen on Saturdays seem to draw students away from the football field.

“All students know what happens on Saturday afternoons. There is no hiding that away. So, having a viable option to ‘day drinks’ or ‘darties’ or whatever you call them is crucial to this,” Johnson said. “The university never wants to fully talk about ‘darties’ or ‘day drinks’ because they are a more sorted part of our experience here, but the reality is they exist. We’re not trying to start a fight with anyone, we just want to provide as many options as possible to the broadest, most inclusive group of students.”

Though this is the first year of this push to pack the parking lot in front of Rhodes Stadium, Johnson noted that attendance had already spiked for the pre-game party despite the weather.

“Even though it is raining, we still have more turn out than we’ve had before, and the reason for that is school spirit is something we need to make happen. And tailgates are the best embodiment of that in my opinion,” Johnson said. “When it’s raining and we still have 200 people come out, that’s incredible. That’s more people than we had when it was dry last year.”

Johnson also recognized that tailgates are a great way for students to see the fun side of Elon.

“When you go to a typical Elon event, it’s usually a very serious event, an academic event, and this is a great opportunity to play music and have fun things going on, which students really appreciate,” Johnson said.

“The reality is that when it comes to tailgating, drinking is a part of the natural culture. We’ve communicated all of the rules surrounding drinking from the [Office of Student Involvement] to all student organizations that are hosting events,” Johnson said. “So, all students are very, very aware of what is acceptable and what’s not acceptable, and how to stay within the law. We want to make sure that everyone is knowledgeable so ignorance doesn’t hurt anyone.”

The goal for everyone involved has become fully focused on building a foundation on which future years can expand on the tailgating experience.

Whether a student has gone to every tailgate this year or could not even point out Rhodes Stadium on a map, Johnson has a request for every student on campus: show up.

“Come out to tailgates,” Johnson said. “It helps our bargaining position when we are advocating on behalf of students if you all come out.”