Hurricane Florence devastated her hometown, but this Elon freshman has been through worse

As her hometown of Wilmington recovers from heavy destruction, Lilly Santiago uses the tenacity she learned in her previous challenges to continue adjusting to college. 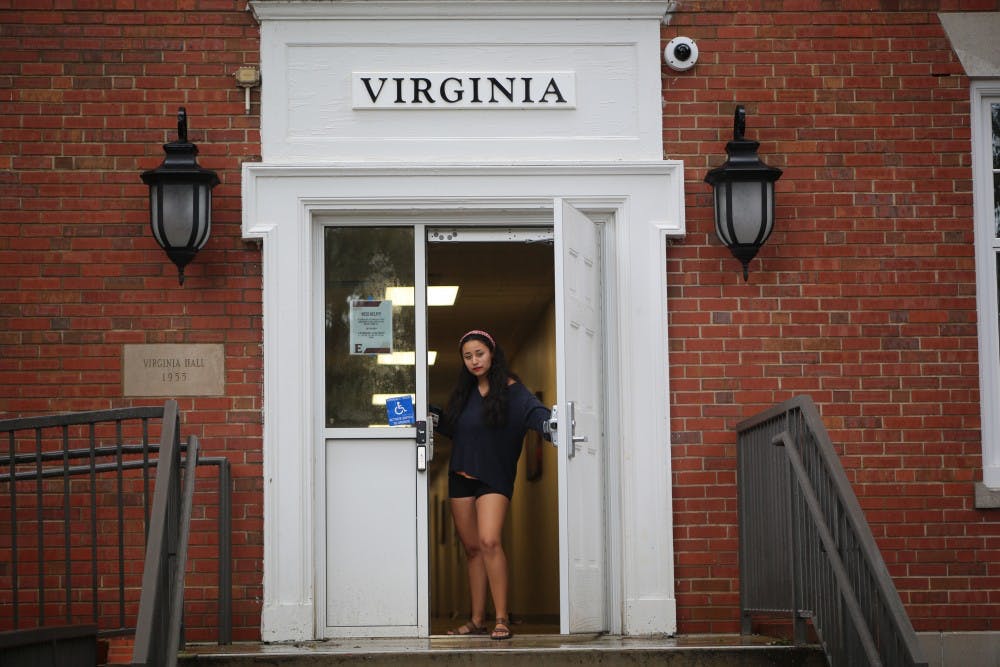 Photo by Anton L. Delgado | Elon News Network
Santiago is one of 118 Elon University students who lives in a mandatory evacuation zone along Hurricane Florence's path. She and her mother both decided it would be safer for her to stay in her Virginia dorm.

Lilly Santiago's two most valuable possessions are her journal and her Italian music box. The journal is with her — it sits on her nightstand next to her twin-sized bed at Elon University.

But she doesn't know about her music box. She left it at her house during freshman move-in day nearly a month ago. And this week, her house may have been the worst place to keep anything.

For most of her life, Santiago has lived in Wilmington, North Carolina, the town battered by the full wrath of Hurricane Florence. Now a tropical depression, Florence killed more than 30 people in the Carolinas as of Tuesday, and 118 Elon students live in a costal area affected.

The storm dumped more than 30 inches of rain, flooding Wilmington highways so severely that the city is now essentially cut off from the rest of the state.

Santiago says she’ll be at peace if she never sees the music box again. It’s just a material possession compared to the lives lost and the destruction her city endured the past few days.

She’s also been through worse.

Her journey to Elon was a storm in itself, and the effect Florence left so early in her college career isn’t comparable to the adversity she’s already faced. Now, she’s using the hurricane as another way to test herself.

“It's kind of ingrained in me to just pick up, move on and do something better,” Santiago said. “The things that make me the most upset are things that I have no control over that are on a world scale. But when I came to terms with the fact that there are terrible things happening all the time, things that happen to me don't seem that bad because I'm like, ‘I’ll get over it.’”

Santiago, 17, wrote in her orange journal nearly every night from second to fourth grade. One of her favorite entries is about Christmas with her mom when she was 7 years old, which she wrote in pink ink. Santiago grew up in a religious household. Her mother is Jewish, and her father is Catholic. But that did not guarantee her a stable childhood. Santiago’s parents divorced when she was 4 years old. Her mother, Joyce, raised her alone and often struggled with money as a single mother.

“It was hard,” Joyce said. “It was hard because you have to balance work, the financial strains and keeping your child protected at the same time.”

Those trials forced the Santiagos to move houses four times. Additionally, Wilmington’s population is only 6 percent Hispanic, according to Census data, so Lilly, who identifies as Puerto Rican, said she wrestled with finding her identity. To cope, she constantly read, hoping to pave her own narrative.

Throughout middle school and high school, she found her groove. She discovered her creative outlet through music and theater at John T. Hoggard High School. She ingrained herself in the Jewish community. But, Lilly said the most important thing was being around people and having deep, vulnerable conversations.

“She was always ahead of her time mentally, I thought, and she had to grow into that as she got older,” Joyce said. “She appreciates what she has and the people in her life very deeply. She doesn’t take that for granted.”

During the college search, Lilly initially considered only attending a public, in-state school. But she discovered Elon’s Odyssey Program, the university’s most selective and lucrative scholarship. One single scholarship costs $500,000 to endow, and that doesn’t even include additional grants.

Among other things, the application calls for high school seniors to have experienced some sort of hardships in their lives. Lilly applied and was selected from over 500 applicants to become one of 38 Odyssey Scholars in the class of 2022.

“I was really taken back because it was really cool,” Joyce said. “It was such a wonderful opportunity, considering our situation. She worked so hard and had so many challenges.”

But more challenges were quickly approaching.

As soon as Jon Dooley, vice president for Student Life, sent the email, Lilly said her decision was already made.

The campus-wide note on Sept. 11 “strongly encouraged” students to leave, a safety precaution as Florence, then a Category 4 hurricane, barreled toward Elon. Forecasts called for 7 to 10 inches of rain, causing heavy concerns for power outages. The university closed all operations Sept. 13-14 in caution for student safety.

With Wilmington directly in the storm’s path, Lilly’s main concern was her parents. Soon, she learned Joyce evacuated to Raleigh while her father fled to Tampa. Lilly said leaving Elon was never really in question.

“I kind of felt like it was a test of courage,” Lilly said. “I felt like I'm at Elon now; I’m at a point where you can't avoid handling big things in your life forever. Whether it's a storm or it's something else, this is a new stage, so I have to handle what comes to me. I felt excited to test myself.”

Other students and their families thought differently, and thousands of them left campus. With their home in the danger zone, Lilly and Joyce knew it’d be much safer for her to stay. But seeing so many students with the ability to leave further emphasized her socioeconomic status.

“A lot of kids here have extra money they can spend, and they can go off to California on a whim or Florida and go to the beaches for three days and then come back,” Lilly said. “It’s like, ‘Oh, you know, I don't have that type of money laying around.’ But I was like, ‘OK, this is what I'm dealt with,’ but I wasn't particularly upset about it. It gave me an opportunity to get closer to the people on my residence hall floor.”

Lilly said she used the time off during the storm to study. But, her mind also shifted back home and her childhood.

Lilly said she’d be OK if she lost her music box because she’s lost it before. When Lilly was younger, her house was robbed, and her box was among the valuables taken. Her father promised to buy her another one, which he did.

This time, though, the outcome is uncertain.

Elon was spared, seeing relatively small rain as the storm shifted paths, but Wilmington suffered.  As of Tuesday, neither Joyce nor Lilly knows when they plan to return home and see Florence’s toll. Downed power lines and flooded roads make it difficult to travel there or contact loved ones.

Their house could still be standing, or Florence could have destroyed it and swept the music box into the murky waters of the Atlantic Ocean. Lilly is prepared for either outcome — she was prepared even before the storm.

Joyce has been trying to sell their Wilmington home and move to Raleigh for months. Her father, a marine merchant, travels frequently, sometimes being gone for months at a time. Elon is her home now. While Wilmington will always be a part of her, she’s not afraid to let it go.

“When I left for college, they also told me to take everything I want because I may not be coming back,” Lilly said. “I just had to prepare myself. ‘You're not going back to Wilmington the same way. It's never going to be the place that you grew up.’”

“I detached myself earlier, and that's not something that everyone did.”

University wide, the hurricane presented a distraction, especially to freshman students. In August, President Connie Book announced “The Well Connected campaign,” which focuses on the creation of a six-week long program to benefit students' overall well-being, especially freshmen as they become adjusted to campus. Because of Florence, Dooley said the university may have to think of new ways to cater to those students.

“They’re only three weeks into their first year on campus, and this was a major disruption,” Dooley said. “We know that it is going to take a little while to get back into the groove of things, and it's going to give us a unique challenge.”

Lilly says she will attack that challenge, which is what she’s always done. She wants to continue her campus involvement, mainly by joining the Elon Hillel and participating in open mic nights at The Oak House.

Because she doesn’t have a car, Lilly says the only way she’ll return to Wilmington is by joining a charitable cause. That way, she’ll be able to lend a hand to those who suffered more than she did.

And maybe, she’ll be able to find her music box.

“I've always been given more privilege than some of the people that are struggling somewhere else,” Lilly said. “This happened to Wilmington. It could've been worse. It could've been better. But you have to realize that everyone is connected and you have a personal obligation to help people.”