"It's unfair, but that was my reality."

Two pictures of me tell two vastly different stories. Take time to differentiate between them. 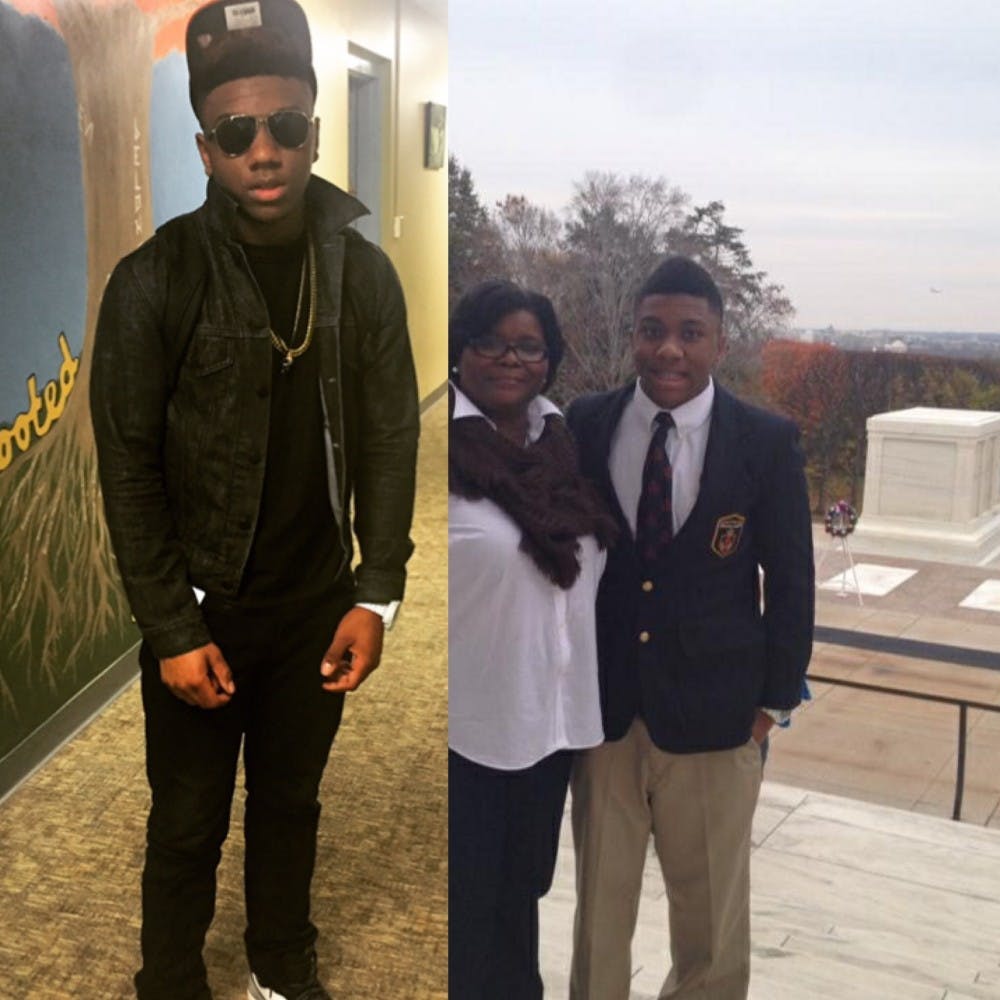 Maybe this is the new norm and I have to accept it.

Silly me for thinking I was going to inherit a nation that was supposedly “indivisible,” as I robotically recited in the Pledge of Allegiance in grade school. Maybe I should accustom myself to forever being profiled as my Halloween costume instead of an actual representation of my personhood because we refuse to have uncomfortable conversations or take actions.

I’ll make sure to prewrite my eulogy to save my family the trouble in case I’m murdered in cold blood — an unfortunate trend that’s on the rise for people who look like me.

WATCH: "Racial profiling has to stop... but also the retaliation has to stop. Enough is enough." @DwyaneWade #ESPYS https://t.co/p7twmTjimT

October 31 fell on a Saturday last year, which molded my first Halloween in college into a three-day event. I didn’t feel like buying a trio of exquisite costumes, so I improvised with what was in my closet. Before going out on Friday night, I threw on street clothes and told everyone that I was “Eazy E.” Resembling Eric Lynn Wright wasn’t a problem. All I did was wear dark colors, don sunglasses and a few gold chains, fasten on a fitted cap and sag my pants so people could see my boxers. I even blasted all of N.W.A ‘s famous songs like “F**k the police,” “Gangsta, Gansta,” and “Dopeman,” through my portable speaker for good measure.

Eazy E was the ringleader for N.W.A., a group whose vulgar, explicit music resembled the treatment they endured at the hands of law enforcement in the streets of Compton, California. He used his platform to articulate a struggle I’m unable to relate to, and his immoral lifestyle that led to his death by HIV was one I refuse to follow. I respect him greatly because he rapped the truth and did it boldly, essentially paving the way for modern music. But he was my complete opposite, which made him the perfect costume.

That’s what you do on Halloween — be something you’re not.

Universal Pictures documented N.W.A.’s story into a highly acclaimed motion picture last year. It’s categorized as a drama, not a horror flick like the ones I watch to get into the Halloween spirit. If I have trouble finding a good scary movie this October, replaying ABC's newscasts from July 6-8 is certainly an option. I got more chills watching those than I did watching Friday the 13th or Nightmare on Elm Street combined.

But those tragedies occurred in reality and weren’t scripted by a screenwriter. That makes them all the more terrifying.

Myriad emotions swirled inside me when I read the headlines about Alton Sterling, Phillando Castile and the five Dallas policemen. It’s like America skipped class when the U.S. history professor lectured about the Civil War and segregation periods and failed the pop quiz. Sterling’s son left the most impact on me because I know what it’s like for your father to be snatched from you and have your childhood accelerated, but he saw a video of his father's brutal death and media will forever hound him for a quality soundbite about his weakest moment for the rest of his life.

Cameron Alton breaks into tears during a press conference after his father's death.

Last week, the Red Sea of conflicting ideologies parted, and instead of finding a middle ground and passing through it together, Americans picked sides and were swept away by the crashing waves of their own self-righteous opinions. In the wake, individuals forgot every story has two perspectives. Intentionally introspecting the other angle is the only way to prevent future atrocities.

I know that because I’ve lived on both spectrums.

Every time a controversial racial shooting happens, the “what if” questions always pop up. I always visualize how my mom would react if my face was plastered on the airways and #JusticeForEmmanuel circulated throughout social media.

It’s real to me because it could have happened.

The night before my 14th birthday party, five of my friends slept over my house. Around midnight, we played manhunt — a more intense version of hide and seek — at my neighborhood park, a tradition we always did when we were together. An hour into our game, a policeman pulled up, bounced out of his car and threatened to shoot us if we didn’t raise our hands.

Apparently, my neighbors called 911 under the suspicion that we tried to break into cars, a laughable, incorrect notion. The park was open 24 hours, so it wouldn't have warranted a trespassing violation. After he spoke with us — very disrespectfully, too — he called for backup to search us with K9 units barking in the patrol cars.

In my child-like ignorance, I couldn’t comprehend what transpired. I didn’t commit a crime, yet I was treated like a thug. My mom and I then had the infamous “talk.” With her hands on my shoulders and a look of desperation in her eyes, she told me I had to be more careful than my white friends, and my margin of error was microscopic compared to theirs. Some people will misinterpret my intentions simply because I’m different. It’s not fair, but that was my reality. If even a second of that incident went south, I wouldn’t have lived to get my driver’s license.

That cop only saw a heap of brown flesh. He didn’t see a boy who, three years later, was chosen by my school's administration to lay a wreath on the Tomb of the Unknown Solider during a class field trip to Washington D.C. because they said I embodied their desired characteristics of leadership, integrity and compassion.

All he saw was another “Eazy E.”

Almost every year since then, I’ve seen a string of similar confrontations that resulted in not-so-happy-endings. It’s impossible for me to not have a connection with the victims because it could have been me.

My biggest nightmare for my mom is that she will have to bury her husband and her son in the same lifetime. I doubt her sanity would ever recover. But if a broken taillight or wearing a hoodie to get a Red Bull can escalate to me having a bullet lodged in my chest, that nightmare will be a possibility due to our country’s proven track record.

It’s understandable that a race, which feels it is being victimized and ruthlessly hunted, would want retribution. Its only human nature. But the Dallas shooter committed a detestable act and only furthered the divide. Both my parents served a combined 39 years in the Navy, and my father would roll over in his grave if he searched my heart and found animosity for those who place their life in limbo for others. They embedded in me the value of selflessness.

A policeman goes to my church, and he and I recently began a mentor-mentee relationship. The burdens of entire cities are hurled on their shoulders. Their mistakes are public and they react on instinct, something I completely understand as an athlete. They don’t have the luxury of a delete key. To revolt against the protectors of our society because of the actions of a few is a travesty because the work they do is imperative to our republic.

There’s no other way to describe 2016 than a dystopian coloring book. Everyone is coloring outside the lines so their hue is the most potent. But they are inadvertently making the drawing horrendous.

Red and blue are bickering more harshly than usual on Capitol Hill (and Red can’t seem to unify itself on the type of shade it wants). Black and white are toiling over of systematic racism that spans generations. Blue patrols the streets trying to keep everyone safe, but black seems to think they are against them. And while the Rainbow wants everyone to get along and be accepted their own right, they grieve after being targeted in a mass shooting that resulted in a terror attack on American soil second only to 9/11, an event that altered human history.

The colors on the page, though, are supposed to complement each other in order to make the picture recognizable.

President Obama: "I see what's possible when we recognize that we are one American family." https://t.co/LmF2yQRoId https://t.co/tJR8h0nj8G

President Obama calls for unity during the memorial service to honor  the five slain officers.

Two hundred-forty years is a speck compared the centuries England, Greece, and countries in Asia have  existed. Those nations are still conflicting internally to this day, and this tension in the U.S. is shaping up to be our second self-evaluation.

This struggle transcends time and the only way to emerge triumphant is holding each other accountable to learn. There has been much success, ranging from the first African-American president to the inward dialog of a small private school.

But it is evident that more work needs to be done.